A London art gallery recently showcased its first-ever "Kimono Catwalk," a modern take on the concept of fashion shows and haute couture, as models shuffled down the runway in a wide range of traditional Japanese garments.

The event arranged by the Japanese Gallery in Islington, which specializes in Japanese woodblock prints, or ukiyo-e, was held to celebrate traditions around kimono, cultural diversity and inclusiveness among fans of Japan's national dress.

The organizer said it collaborated with contemporary designers and kimono specialists, with models coming from far and wide in line with the multicultural and inclusive spirit, for International Kimono Day, celebrated annually on Nov. 15.

Rhiannon, a British photographer and social worker who asked to be called by her first name, said she heard about the event on social media. A former 1970s punk, she loves to wear "unusual and wacky" designers like Alexander McQueen and Issey Miyake, mixing and matching fashion styles to form "(her) own take on things." 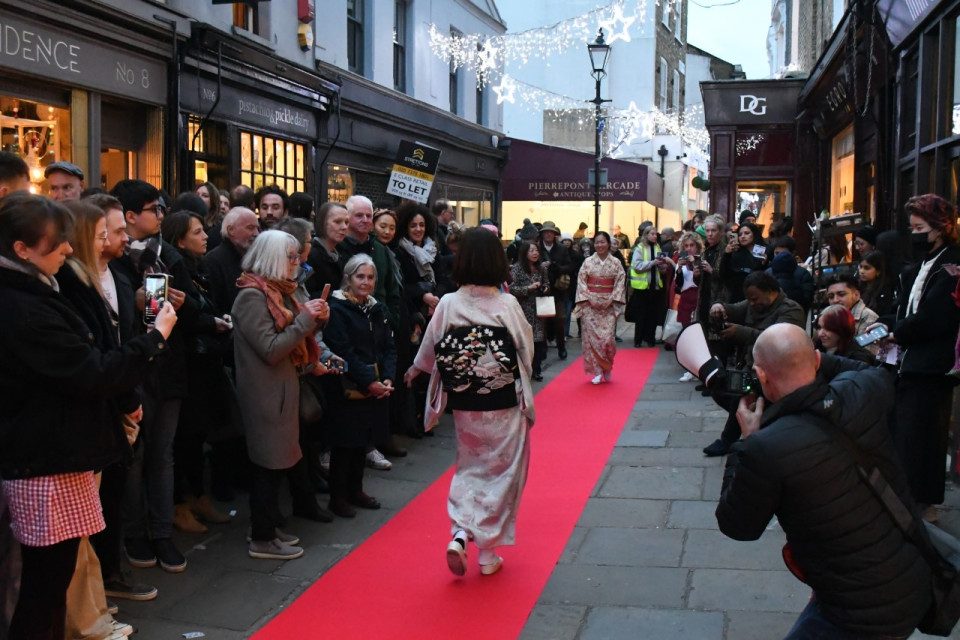 Photo taken on Nov. 19, 2022, shows participants of a "Kimono Catwalk" organized by the Japanese Gallery at Camden Passage in London's  Islington. (Kyodo)

"I love my kimonos because they're very comfy, and you can layer them up -- I just need someone to show me how to wear them properly. I'd never seen anyone wear kimonos like this before today," she said.

One of the designers participating was Nange Magro, the half-Italian, half-Japanese founder of Dead Lotus Couture, whose designs have been worn by the likes of Katy Perry and Madonna.

Also showcasing her work was South African-born designer Tia Oguri, who promotes the dress as a form of sustainable fashion through her Uber Dandy Kimono collection.

Vintage kimono dealer and long-time gallery associate Sonoe Sugawara also lent some traditional antique pieces to the show. She was a key contributor to the gallery's recent exhibition "Kimono: The Making of a Cultural Icon," which showcased how the dress has been chronicled in woodblock prints and other mediums.

Japanese Gallery was established in 1978 by the parents of its current owner, David Wertheim, and is now the oldest retailer on Camden Passage -- a picturesque street filled with antique shops and small, independent businesses.

During the COVID-19 pandemic, Wertheim was inspired to expand the gallery's noncommercial work through the Ezen Foundation, a nonprofit organization dedicated to providing access and education about Japanese art and culture to the British general public.

The gallery already collaborates with organizations like the British Museum, and the foundation further promotes Wertheim's ethos of cultural appreciation and discovery. 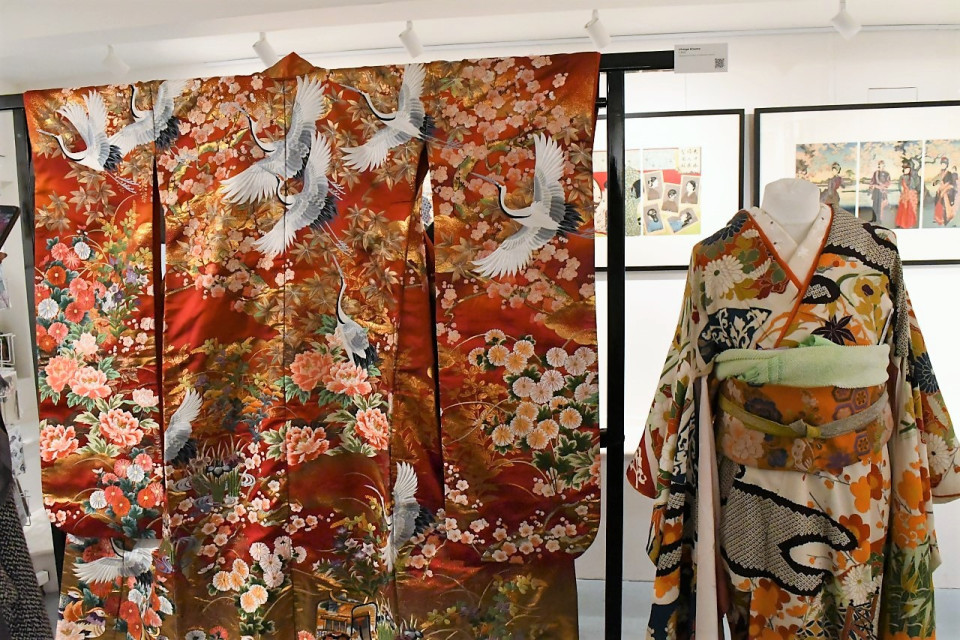 Photo taken on Nov. 19, 2022, shows two vintage kimonos loaned by Furuki Yo-Kimono Vintage Shop to the Japanese Gallery at Camden Passage in London's Islington, for the "Kimono: The Making of a Cultural Icon" exhibition. (Kyodo)

"It's about the combination of different cultures becoming one entity," he said. "If the foundation can serve as a cultural platform for artists, artisans and curators of exhibitions, we would become an introduction to Japanese culture."

The "Kimono Catwalk," held on Nov. 19, was as much about the local community as it was about international collaboration. Many of the gallery's small-business neighbors contributed to the event's prize draw and attended to show their support.

Masami, who works in tourism and only gave her first name, became involved after taking Zoom classes about kimono by the event's organizers. She thought it would be nice to have an occasion to wear the traditional dress by participating in the catwalk.

She also has a fondness for ukiyo-e, has experience working with antiques and enjoys discovering more about kimono through the gallery's work.

"I chose to wear the most comfortable kimono I own today, made by my mother," she said. "It's warm and made of wool, so perfect for Christmas."

"Everyone here today is wearing so many different kinds, from wonderful garments made from kimono material to vintage kimonos...it made me think there are so many possibilities with kimono," Masami added.

The gallery hopes that as the "Kimono Catwalk" becomes an annual event, it will help Camden Passage grow by attracting more people to its local businesses.