The assassination of former Prime Minister Shinzo Abe has been picked as the top domestic news story of 2022 by senior editors of Kyodo News and its member or subscriber newspapers and broadcasters. 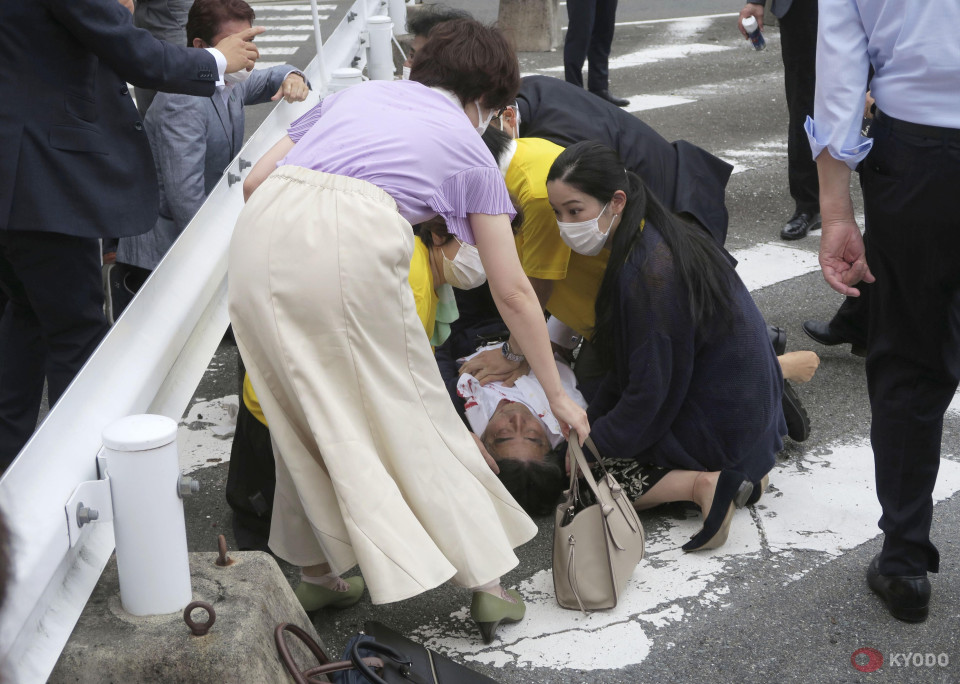 File photo taken in Nara on July 8, 2022, shows former Japanese Prime Minister Shinzo Abe fallen on the ground on the side of a road after being shot from behind when he was giving a stump speech for the July 10 House of Councillors election. (No trimming permitted)(Kyodo)

Former Prime Minister Shinzo Abe was shot dead on July 8 by a lone gunman while delivering a stump speech in the western city of Nara two days ahead of a House of Councillors election.

The arrested attacker has said he held a grudge against the Unification Church and targeted Abe because of the politician's suspected links to it. As such, public attention was drawn to the religious group and its ties to the ruling Liberal Democratic Party.

The state funeral of Japan's longest-serving prime minister on Sept. 27 was met with widespread opposition over its projected cost, with many also saying there was no legal basis to justify holding such an event. 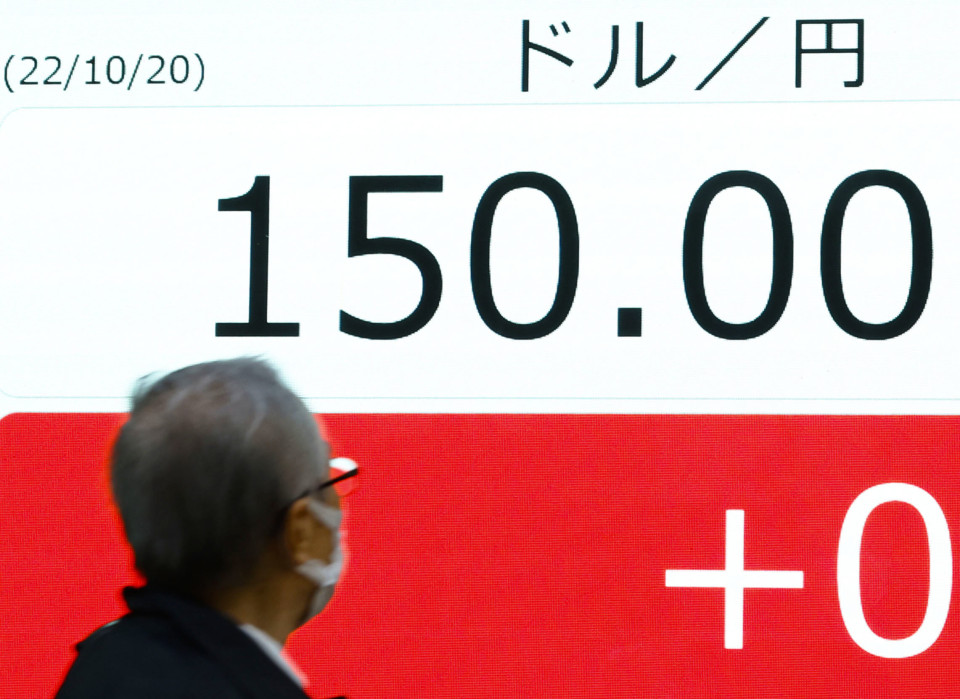 The Japanese yen plummeted to just shy of 152 against the U.S. dollar in Tokyo in October, its lowest level in 32 years, amid monetary tightening in the United States and easing in Japan, prompting the Bank of Japan to conduct stealth yen-buying interventions. Prices of imports have jumped and the core consumer price index surged 3.7 percent in November from a year earlier, the fastest pace in nearly 41 years, hitting people hard. 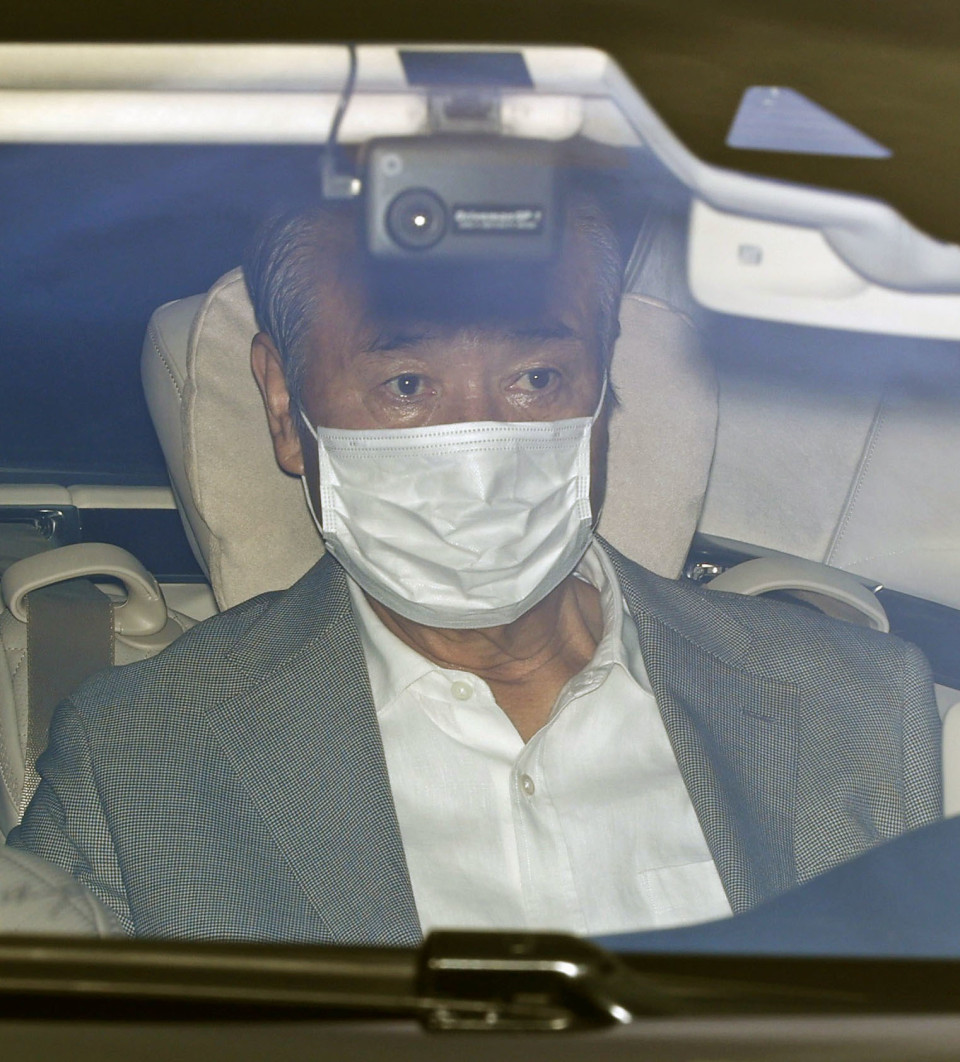 Haruyuki Takahashi, a former Tokyo Olympic organizing committee executive who wielded huge influence in sports circles, was arrested on Aug. 17 and later indicted on a charge of receiving a combined 196 million yen ($1.5 million) in bribes from five companies. The scandal has since widened to bid-riggings over the games, overshadowing Sapporo's bid to host the 2030 Winter Olympics as public sentiment sours. 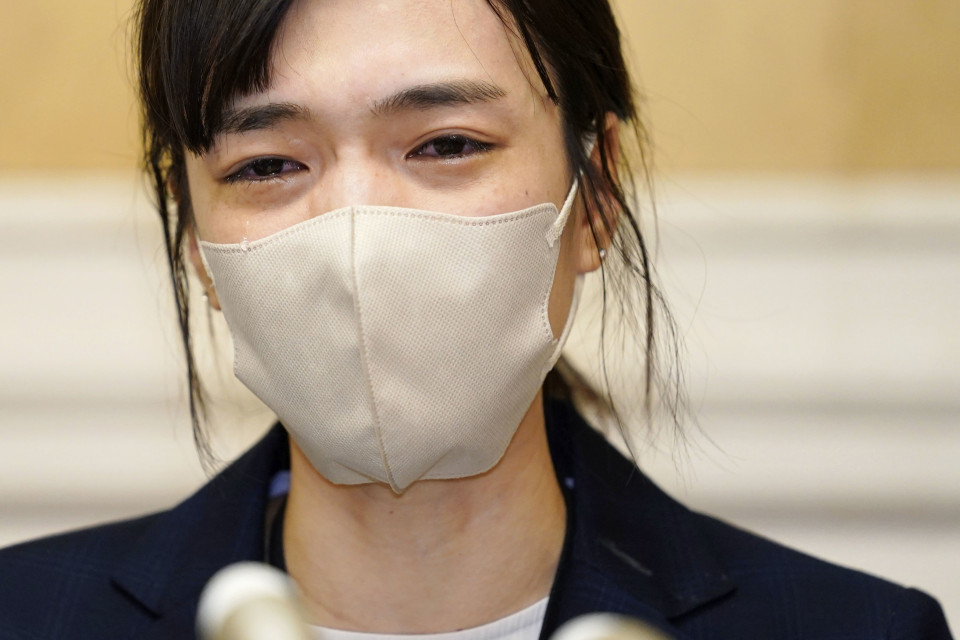 File photo taken on Dec. 8, 2022, shows Sayuri Ogawa, who uses a pseudonym to protect her identity as a "second-generation" family member of Unification Church followers, shedding tears during a press conference in Tokyo after a bill to help victims of malicious fundraising by religious groups cleared the House of Representatives. (Kyodo)

The government exercised its "right to question" under the religious corporation law for the first time on Nov. 22 as part of its investigation into the Unification Church. The move is widely seen as preparation for seeking a court order to revoke the church's tax-exempted status. Following controversy over the group's fundraising practices, the House of Representatives on Dec. 10 passed a bill to ban organizations from malicious solicitation of donations. 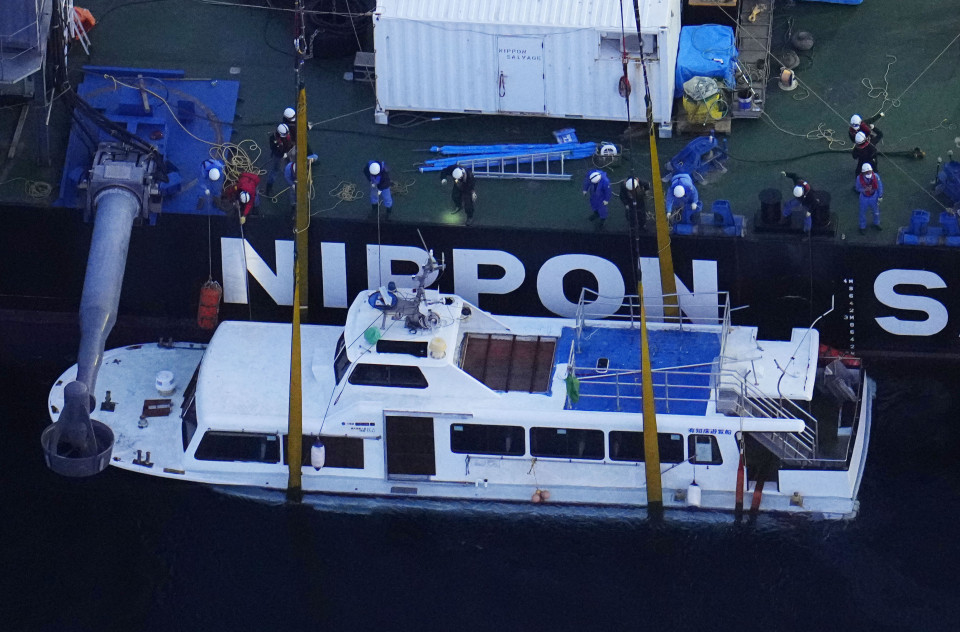 File photo taken from a Kyodo News helicopter on May 26, 2022, shows the tourist boat Kazu I being raised to the surface of the sea off the Hokkaido town of Shari. (Kyodo)

A tour boat sank in cold waters off a World Heritage site on Japan's northernmost main island of Hokkaido on April 23, leaving 20 dead and six missing. The operator of the 19-ton Kazu I admitted it was inappropriate to give the green light to the ship's departure despite the possibility of bad weather. 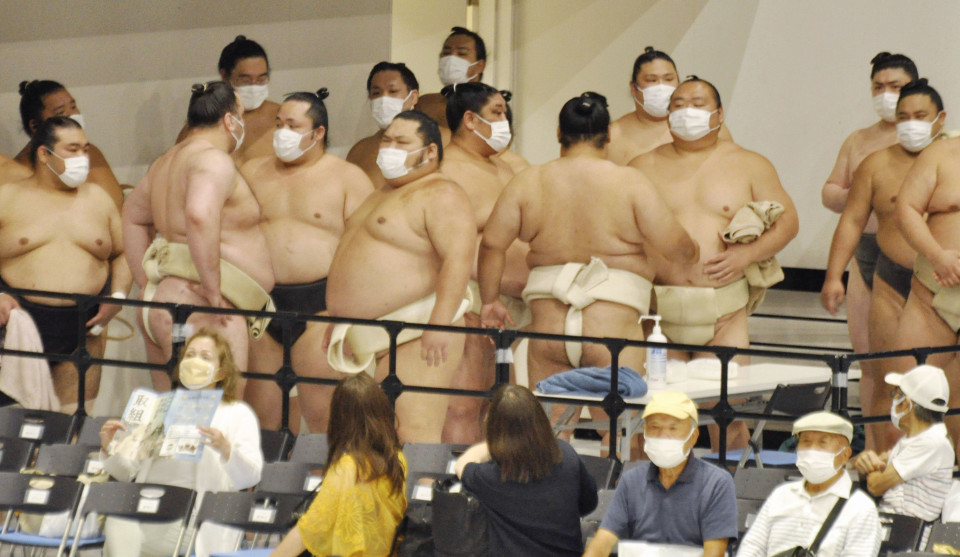 The number of new coronavirus cases reported in a day hit a record high of more than 260,000 on Aug. 19 in the so-called seventh wave of infections, and Japan has seen an eighth wave from mid-November. The government has refrained from restricting people's movements and lifted most border control measures in October to help the country's economic recovery. 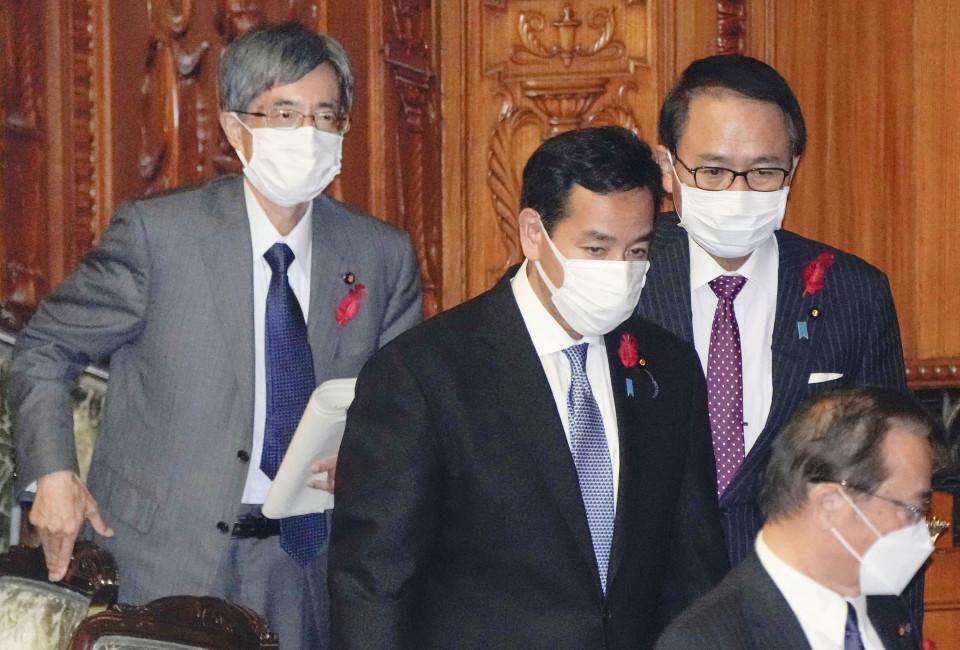 Prime Minister Fumio Kishida's Cabinet suffered major blows after his economic recovery minister Daishiro Yamagiwa, Justice Minister Yasuhiro Hanashi and internal affairs minister Minoru Terada resigned between October and November over ties to the Unification Church, a gaffe and a political funds-related scandal, respectively. The support rate for the Cabinet stood at 33.1 percent in Kyodo News polls conducted in November and December, the lowest since Kishida became prime minister in 2021. 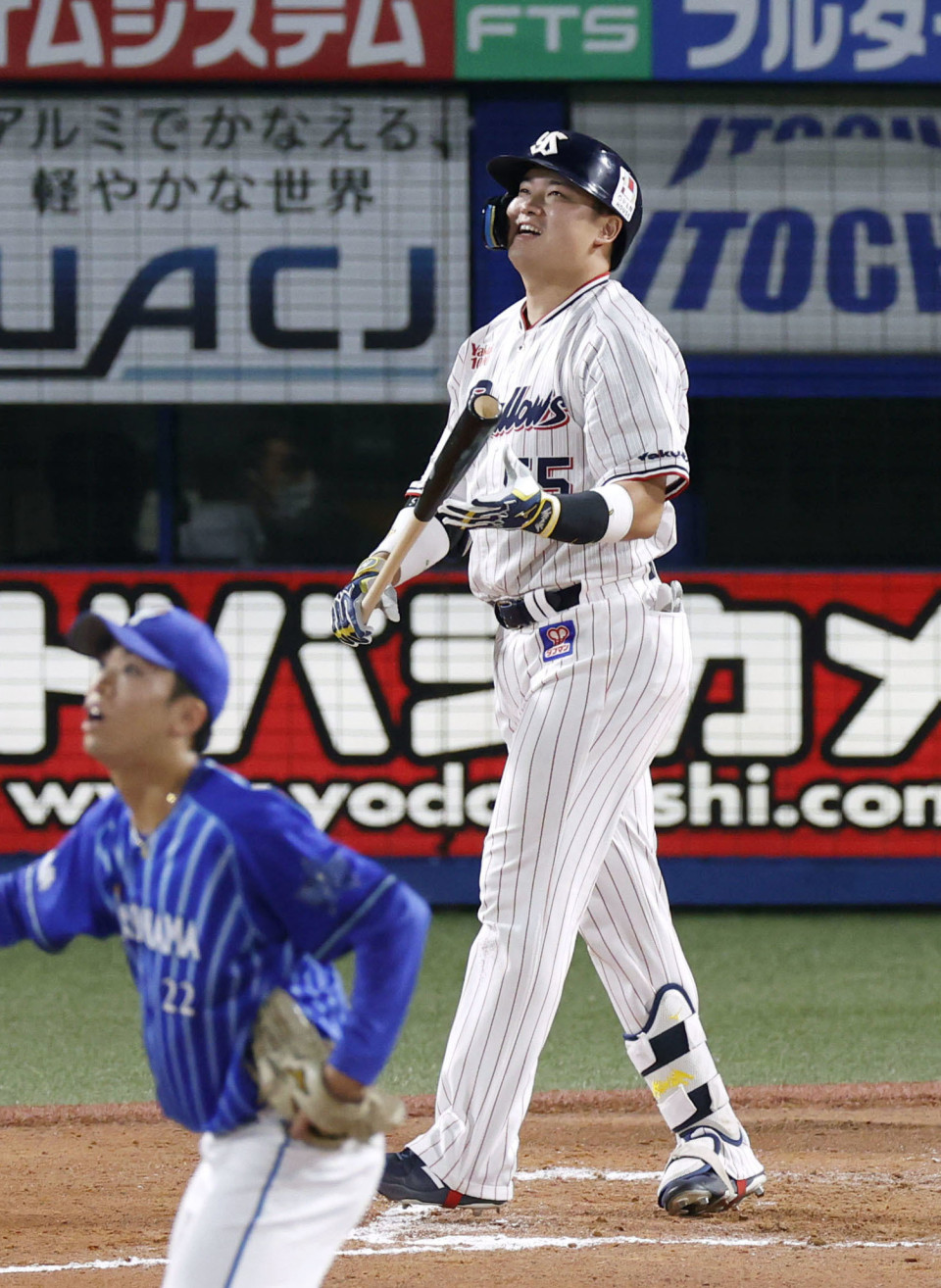 File photo shows Munetaka Murakami of the Yakult Swallows looking up after hitting his 56th home run of the season in a Central League baseball game against the DeNA BayStars on Oct. 3, 2022, at Jingu Stadium in Tokyo. (Kyodo) 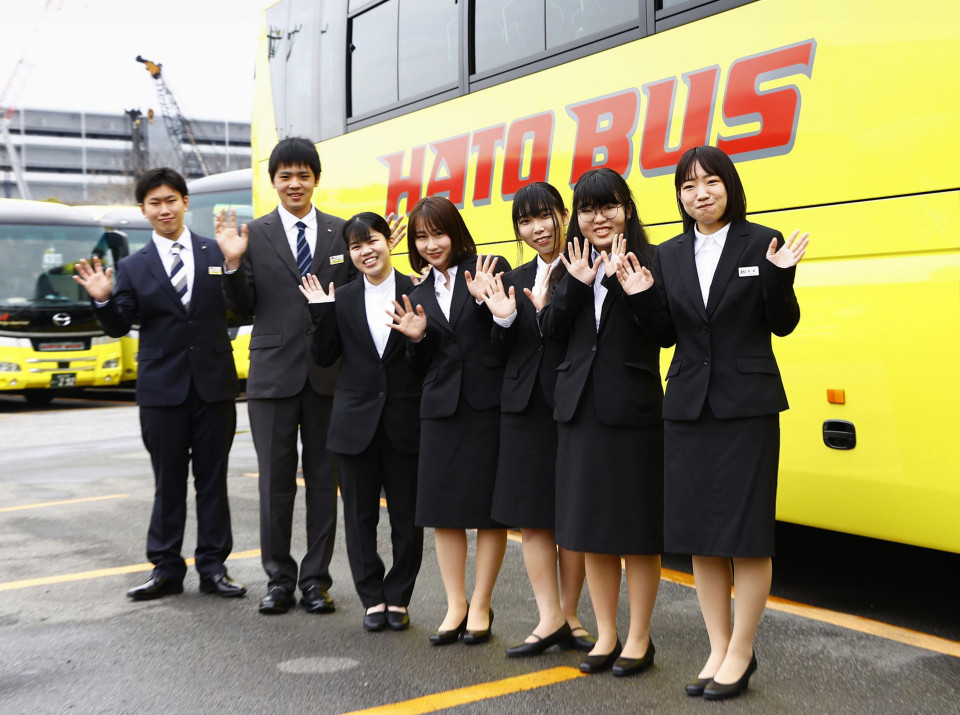 Japan lowered the age of adulthood from 20 to 18 under the Civil Code on April 1, the first time the legal definition of an adult was changed in over 140 years. With the change came new freedoms and responsibilities for 18- and 19-year-olds. The legal age for drinking and smoking remains at 20. 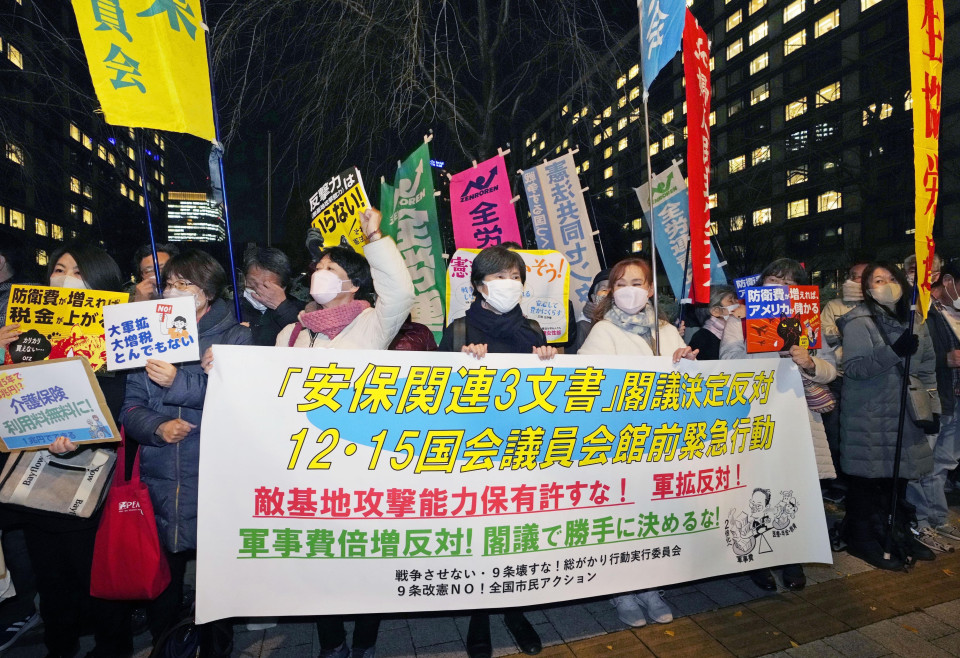 File photo shows people protesting in Tokyo on Dec. 15, 2022, against the government's revamping three of its key security and defense-related documents to forge ahead with Japan's biggest defense buildup program since World War II. (Kyodo)

In a major shift in its security policy under its pacifist Constitution, the government decided on Dec. 16 to acquire "counterstrike capabilities" that could potentially reach an adversary's territory. It also set the target of doubling its annual defense budget to about 2 percent of Japan's gross domestic product over the next five years.