The United States and Australia agreed Tuesday to step up engagement with Japan in military areas, such as by inviting Tokyo to join more of their exercises, amid China's growing assertiveness in the Indo-Pacific. 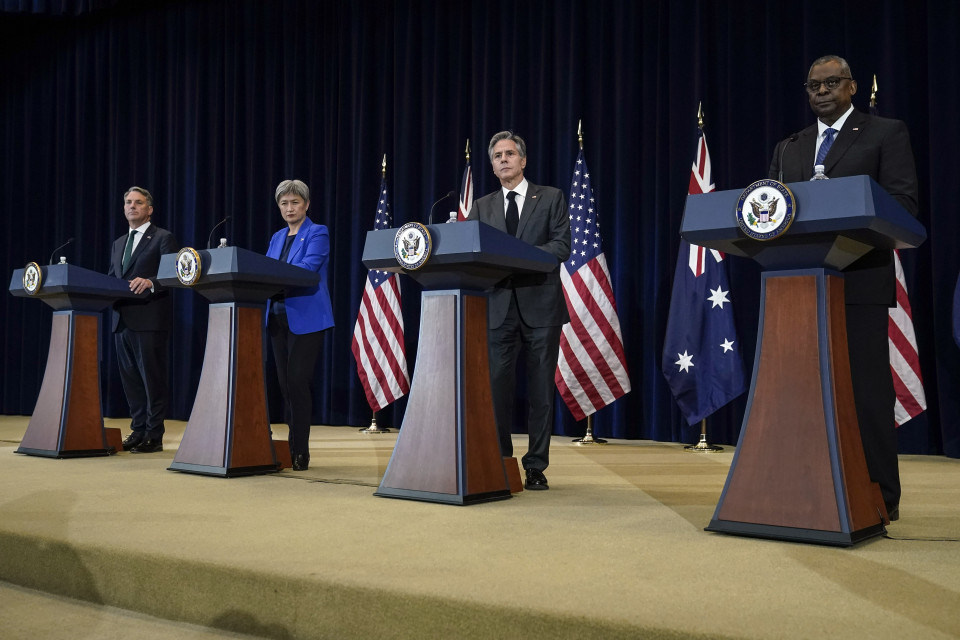 "We committed ourselves to concrete steps to deepen our cooperation in both diplomacy and defense," Austin said, highlighting the challenges that the Indo-Pacific region faces from China's "dangerous and coercive actions" around Taiwan and in the East and South China seas.

He also said, "We agreed to enhance trilateral defense cooperation and to invite Japan to integrate into our force posture initiatives in Australia."

Australian Defense Minister Richard Marles said it was "a great outcome" of the talks that he will be heading to Tokyo for an upcoming meeting "with an invitation for Japan to be participating in more exercises with Australia and the United States."

The meeting in Tokyo is slated for Friday and will involve the defense and foreign ministers of Japan and Australia, according to the Japanese government.

Japan views Australia as a "quasi-ally," behind its security treaty ally the United States.

The leaders of Japan and Australia signed a joint declaration on security cooperation in October, the first such document since 2007, agreeing to consider measures to respond to contingencies that could affect regional security interests.

The United States and Australia, meanwhile, have been enhancing their defense cooperation, including through a three-way Indo-Pacific security partnership with Britain.

U.S. Secretary of State Antony Blinken told the joint press conference on Tuesday that AUKUS members have made "significant strides" toward Australia obtaining the submarines and are "committed to delivering on that promise at the earliest possible time."

The United States and Australia will also continue to advance cooperation under the Quad group that includes Japan and India. Australia will host a leaders' meeting of the group, seen as a counterweight to China's increasing military and economic clout in the region, next year.

While condemning Russia's invasion of Ukraine, Washington and Canberra reiterated their call for the Kremlin to withdraw its forces and noted that Moscow's nuclear threats posed "a serious and unacceptable menace" to the peace and security of the international community.

With North Korea test-firing ballistic missiles at an unprecedented pace this year, the two countries committed to achieving the complete denuclearization of the Korean Peninsula and addressing Pyongyang's weapons development programs.