The number of Indonesian technical trainees in Japan is rising as the recent slide of the yen against the U.S. dollar and other currencies has discouraged trainees from some other countries to come to Japan.

The demographic shift in Japan's foreign technical trainee program has also come about as the result of the differing costs for trainees to come to Japan. Indonesians pay less than those from Vietnam and other nations, for example, according to experts on foreign workers. 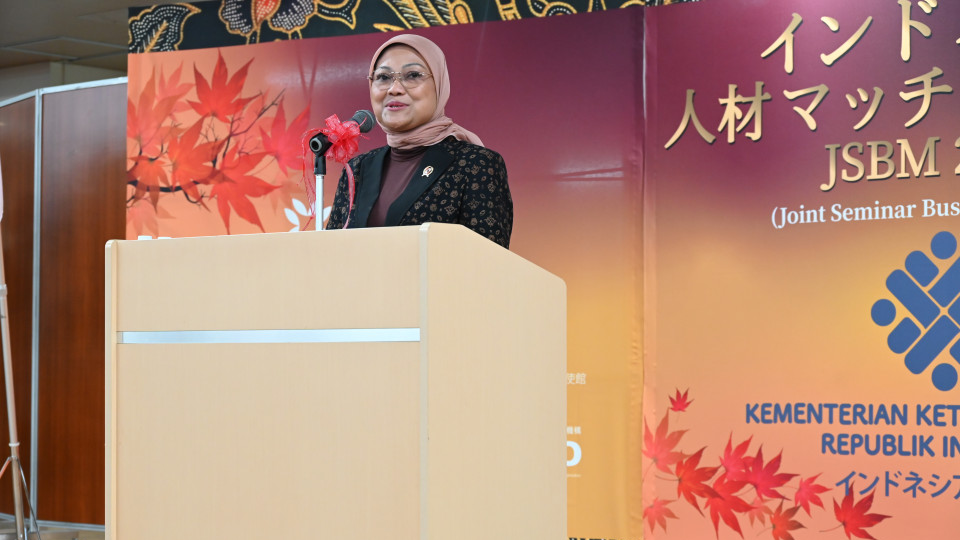 Indonesia's labor minister Ida Fauziyah speaks at an exchange event for dispatching agencies in Indonesia and supervising organizations in Japan of technical trainees on Nov. 30, 2022, in Tokyo. (Kyodo)

According to a survey conducted by the Immigration Services Agency of Japan in 2022, Vietnamese pay the highest amount to agencies and intermediary groups to travel to Japan at 688,143 yen ($5,200) on average, while Indonesians pay 235,343 yen. The average amount a foreign trainee pays is 542,311 yen.

While Vietnamese still account for the largest segment of the foreign trainee population as of the end of June, with their number at 181,957, up 13.3 percent from the end of 2021, that of Indonesian trainees jumped 56.7 percent to 39,177, according to the agency.

The recent yen's weakness means trainees, who often support their families back home, are unable to remit as much money as they had expected.

The depreciation of the Japanese currency has also increased the financial burden on foreign technical trainees who are in debt as the result of migration costs to Japan.

Many foreign trainees borrow money to pay agency and intermediary group fees, and about 55 percent of them were in debt before they arrived in Japan, with average debt for Vietnamese trainees standing at 674,480 yen, data released by the Japanese agency in July showed.

Indonesian trainees, however, owe an average 282,417 yen, the data showed -- the difference the result of lower agency fees and the kind of schemes offered in each country.

"Due to rising competition to hire Vietnamese trainees, many Japanese companies have shifted their target to Indonesian trainees," said Tsuneo Hayashi, Japan director of Ganesha Karya Abadi, an agency for trainees based in Bali, during an interview in Tokyo.

Against such a backdrop, Indonesia's labor ministry, in cooperation with other bodies including Kyodai Remittance, held an event in late November in Tokyo for dispatching agencies in Indonesia and supervising organizations in Japan, along with registered organizations supporting foreign interns.

Indonesia's labor minister Ida Fauziyah said at the event that Japan and Indonesia can complement the needs of one another through the intern trainee program. 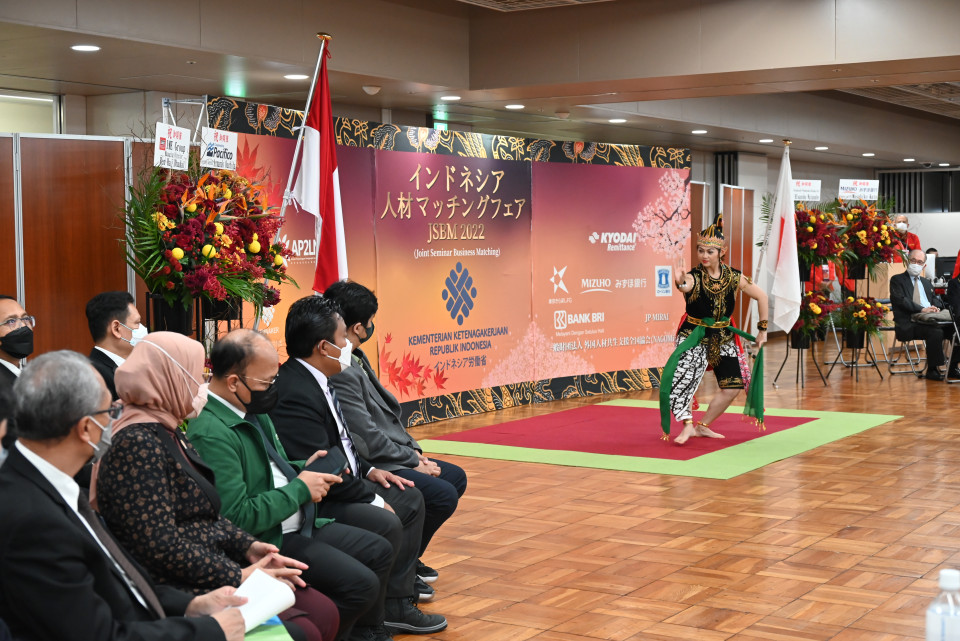 A dancer performs at an exchange event for dispatching agencies in Indonesia and supervising organizations in Japan of technical trainees on Nov. 30, 2022, in Tokyo. (Kyodo)

Indonesia is in dire need of employment opportunities, especially those for young people, as the jobless rate is deteriorating amid the prolonging impact of the coronavirus pandemic, according to JOE Cooperative, a support organization for foreign technical trainees headquartered in Tokyo and Nagoya.

The Indonesian government and JOE Cooperative have signed an agreement to provide subsidies and scholarships to thousands of Indonesian trainees in Japan so that they can avoid being trapped in deep debt.

The project will officially begin in fiscal 2023 following a pilot project, according to the organization.

Since the establishment of the government-sponsored technical intern training program in 1993, problems have been reported at numerous companies that employ foreign trainees, such as wages below the legal minimum, violations of safety regulations, and unpaid overtime.

Since early December, a panel of the Japanese government has been reviewing the foreign technical intern program to address issues relating to human rights violations.

According to the immigration services agency, about 7,000 trainees ran away from their designated workplace in 2021.

Critics have pointed out that eliminating or narrowing the gap between foreign trainees' expectations and actual labor conditions in Japan will partly lead to the prevention of runaway trainees and other problems.

Japan will need 6.74 million foreign workers in 2040 to sustain its target annual economic growth of 1.24 percent, according to an estimate by the Japan International Cooperation Agency, a government-linked aid agency.