Shanghai police were on high alert Saturday, a week after a major protest against China's strict "zero-COVID" policy involving lockdowns erupted in the city, deploying many officers and vehicles to prevent a recurrence of the rally.

On a Shanghai street, where protests occurred for two days in a row, high fences were set up to prevent people from gathering, and security personnel kept guard around the clock.

The protests on the road named after Urumqi last weekend were triggered by the Nov. 24 deadly fire in the capital of the far-western Xinjiang region, with speculation growing that lockdown measures may have hampered evacuation and rescue efforts. 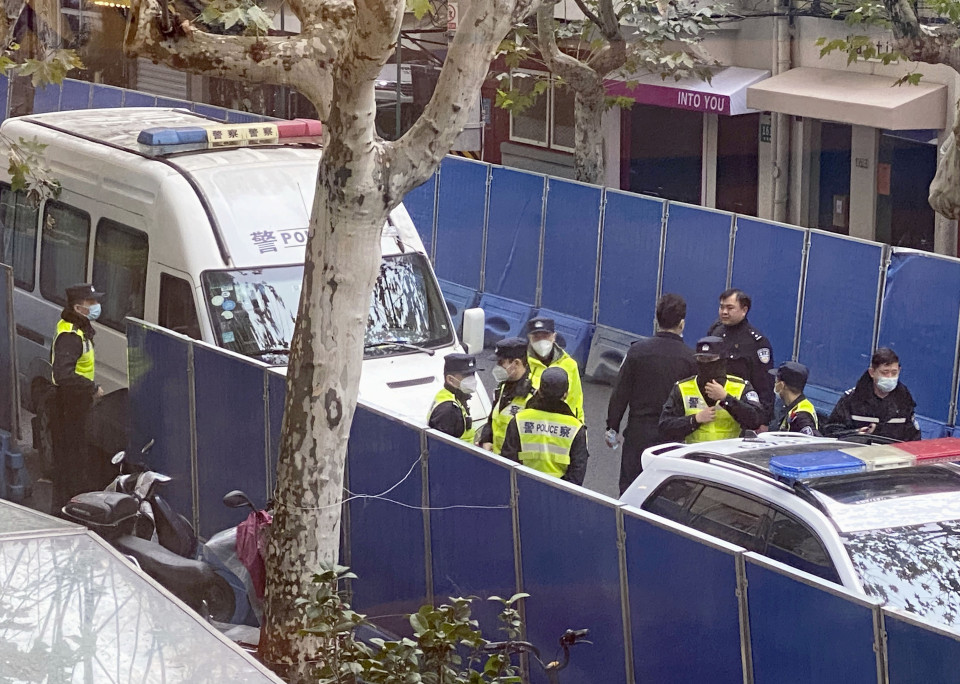 Security personnel keep guard on Dec. 3, 2022 on a Shanghai road named after Urumqi where high fences are set up. (Kyodo)

Similar rallies were held across China, including in Beijing and Nanjing, with some participants making a rare demand for President Xi Jinping to step down. Many police officers and vehicles were also deployed Saturday in the capital.

A man in his 20s has said his friend who joined a protest was escorted away by the police and went through a 24-hour reeducation program, with the friend's mobile phone confiscated for 30 days and checked for communications apps such as Twitter and Telegram, which China cannot censor.

Chinese authorities are believed to have been wary that mourners congregating for former President Jiang Zemin, who died on Wednesday at the age of 96, could develop into anti-government demonstrations, with calls posted on social media for gatherings in memory of the former leader.

Following the protests, some parts of China have eased their draconian anti-virus measures in an apparent bid to reduce public frustration. The People's Daily, the flagship newspaper of the ruling Communist Party, reported on eased COVID restrictions implemented locally in its online edition Saturday.

In Beijing, subway and buses will no longer require negative COVID test results taken within 48 hours starting Monday. Some shopping malls that had been shut down due to the virus spread had resumed operations by Saturday, but many restaurants were still closed, except for takeaways.

In the southern city of Guangzhou, lockdowns were lifted in some areas, while Tianjin and Chongqing saw similarly relaxed measures.

Meanwhile, in Beijing, many free PCR testing sites that had been set up on streets and in residential complexes were suddenly closed down Saturday, with people scrambling to find places that were still open with long queues forming at available sites.

The closures triggered rumors that the capital would do away with strict COVID restrictions, including frequent testing, but the authorities quickly denied the rumors. In China, people must show negative test results to access public places.

Vice Premier Sun Chunlan, who is in charge of anti-virus measures, said Thursday that the pathogenicity of the Omicron virus is weakening and that conditions have been created "for tweaking the epidemic response measures," according to the official Xinhua News Agency.

But the Chinese government has not withdrawn Xi's signature zero-COVID policy, given fears that a surge in infections could overwhelm the nation's health care system.

Xi told European Council President Charles Michel during their talks in Beijing Thursday that participants of the recent protests in China were mainly students frustrated with the COVID-19 pandemic, which has lasted three years, according to senior European Union officials.

The Chinese leader also said the Omicron variant, currently spreading in China, is less lethal than the Delta strain, with the EU officials interpreting Xi's remarks as suggesting that Beijing could loosen some controls.

It marked the first time Xi's comments on the protests were made known, as Chinese media have not reported on the demonstrations.