When Japan were drawn in Group E with Germany, Costa Rica and Spain for the Qatar World Cup on April 1, Hajime Moriyasu relished that his side would face "extremely good opponents."

In beating past tournament winners Germany and Spain to qualify for consecutive World Cup knockout phases for the first time, the manager and his players have shown facets of their game that could perhaps only be brought out against the very best. 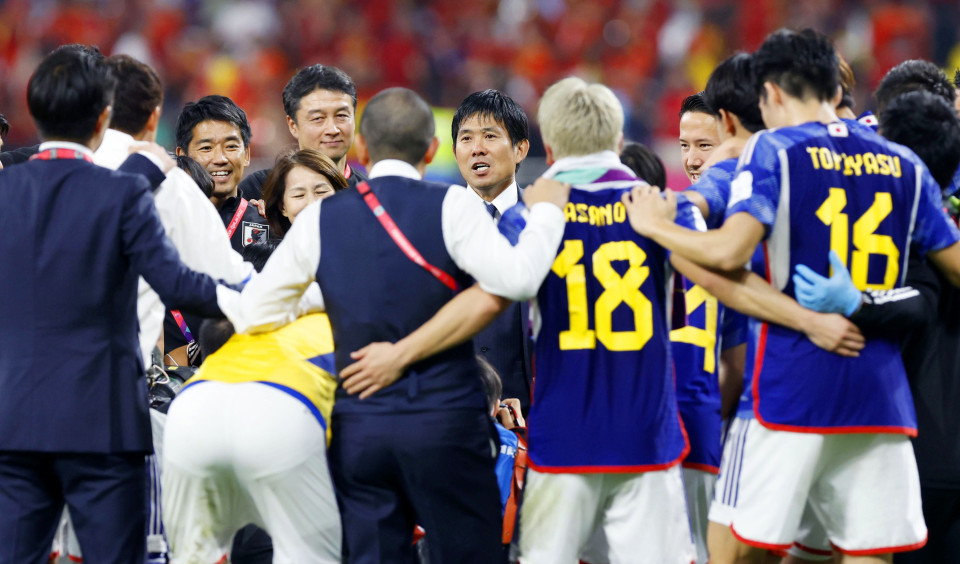 Japan head coach Hajime Moriyasu (C) and his players huddle on the pitch after a 2-1 win over Spain in a World Cup Group E football match at Khalifa International Stadium in Doha, Qatar, on Dec. 1, 2022. Japan advanced to the round of 16. (Kyodo) ==Kyodo

It was hard to envisage at the time of the draw, or even days before the start of the tournament that a Japan side who limped past the final Asian qualifiers and continued to look unpolished heading to Qatar would emerge from what many deemed the Group of Death, let alone top it.

But in defying his critics on the biggest stage, Moriyasu, who has long preached spontaneity to his players, has proven he can command his side with resolve and be frighteningly clinical when the stakes are at their highest.

In his dual role as senior national team and Olympic manager, Moriyasu came under scrutiny for Japan's failure to meet expectations of a medal on home soil at the Tokyo Games in summer 2021 -- beaten by Spain in the semifinals -- followed by the Samurai Blue's rocky start to the final Asian qualifiers for the World Cup.

Having a large number of Europe-based players certainly did not make the complicated arrangement any easier. The onus to qualify as one of the strongest nations in Asia, along with COVID-19 restriction measures, left the 54-year-old little margin for error or time to fine-tune his team before matches.

After his gamble to change system in Japan's crucial qualifier at home to Australia paid off, the team still needed heroics from Junya Ito and debutant Kaoru Mitoma in subsequent matches to drag them through to Qatar. Despite the mitigating circumstances, the manager's conservative and predictable approach remained a lightning rod for criticism. 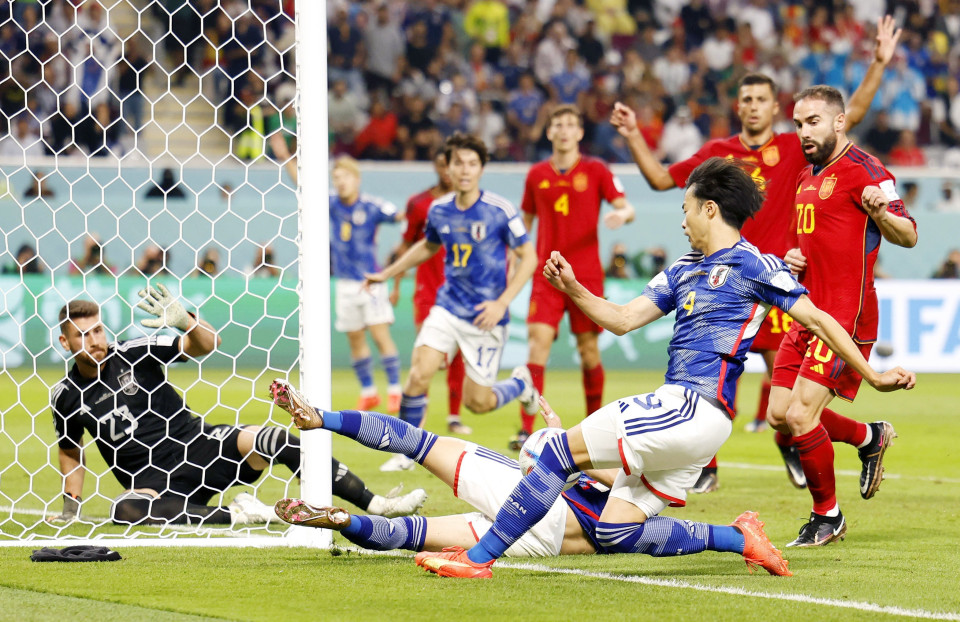 Kaoru Mitoma (front) crosses the ball for Japan's second goal in a Group E game against Spain at the Qatar World Cup on Dec. 1, 2022, at the Khalifa International Stadium in Doha. (Kyodo)

A 1-0 home defeat to Brazil in June was their only real test against the world's best during his time at the helm, while a 3-0 home defeat to Tunisia later the same month stoked further scrutiny.

Moriyasu raised more eyebrows with a number of contentious selections in his World Cup squad named exactly a month ago, and the first-half display against Germany in Japan's tournament opener pointed toward an abysmal campaign. 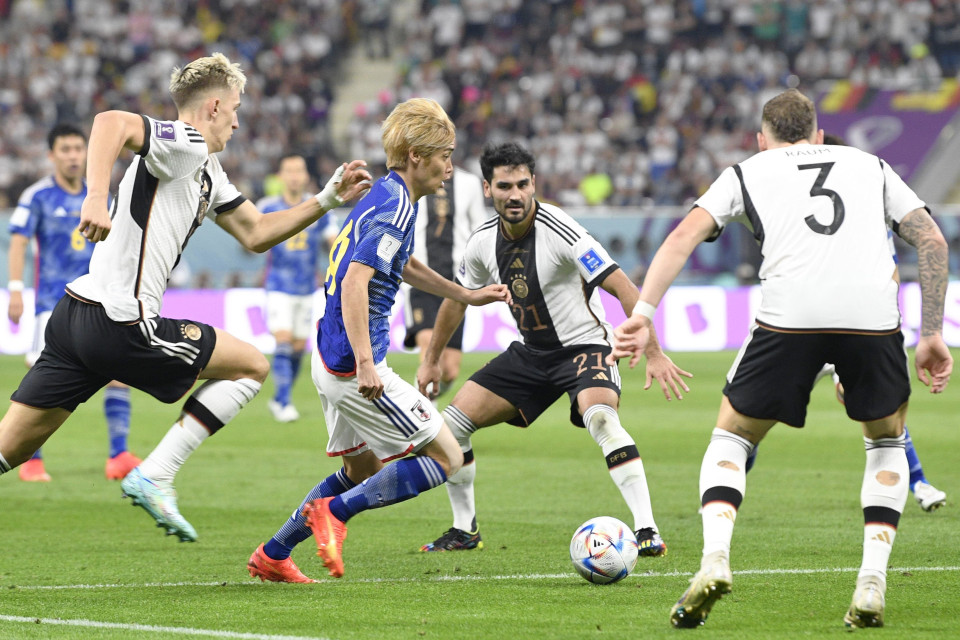 Japan's Junya Ito (C) dribbles during a Group E game against Germany at the Qatar World Cup on Nov. 23, 2022, at the Khalifa International Stadium in Doha. (Kyodo)

But the manager and players came into their own in the face of real adversity, particularly Moriyasu, who for the first time changed his system at halftime before uncharacteristically throwing on an attacking quartet fast enough to turn the game around.

The team's flaws were still there for all to see, nevertheless, as they turned in the kind of performance dreaded by many long-term Samurai Blue fans against Costa Rica.

Broadcast live at the prime time of 7 p.m. Sunday in Japan, it was the perfect opportunity for the team to make committed fans out of curious occasional viewers. Instead, the uninspiring 1-0 defeat could have been enough to put them off for a good while.

But in the wildest turn of Japan's World Cup roller coaster ride, Moriyasu masterminded another miracle Thursday by toppling Spain, again thriving as the underdog. 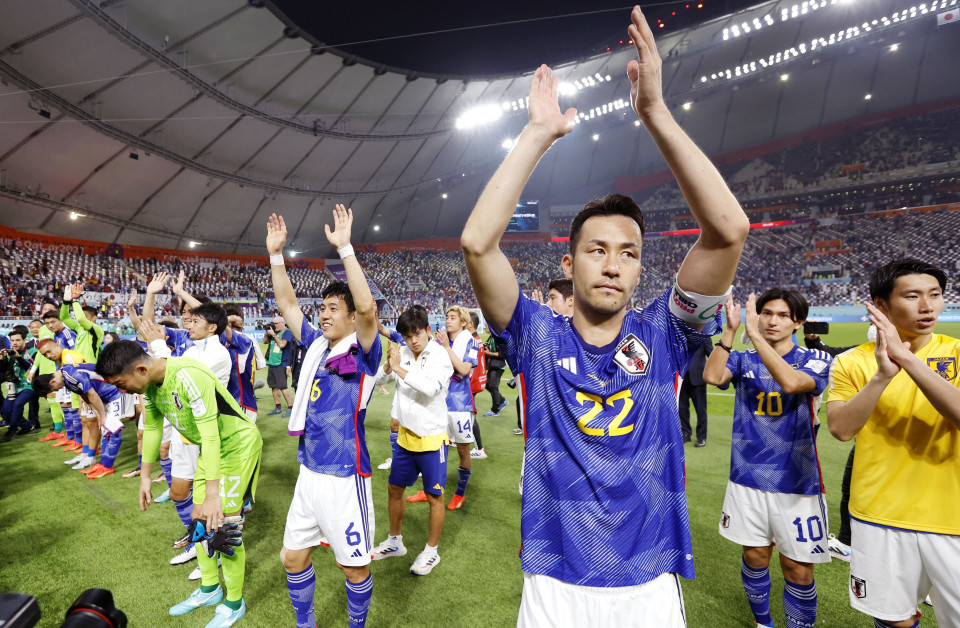 Japan captain Maya Yoshida (front) applauds fans in the stands after a 2-1 win over Spain in Group E at the Qatar World Cup on Dec. 1, 2022, at the Khalifa International Stadium in Doha. (Kyodo)

In what looked like a repeat of their win over Germany, Japan handed their opponents the lion's share of possession before stepping up several gears in the second half to smash and grab the win.

"I've told players (at halftime) well done for sticking to our plan to persevere," said Moriyasu after their win over Spain. "I've asked the players not to concede while continuing to dispossess (our opponents) and turn (defense) into attack."

"Beating the world's best teams, such as Germany and Spain, is also a huge confidence boost for Asia. There are still things to learn, but I want to confidently share the joy that Asian, Japanese football can win against the world's best."

If upsetting the favorites is Moriyasu and his team's real strength, there is no better forum than the World Cup knockout stage to show their capability.