The policy chief of Japan's ruling Liberal Democratic Party and Taiwanese President Tsai Ing-wen agreed Saturday for Tokyo and Taipei to further work together to ensure peace and stability across the Taiwan Strait amid China's military pressure.

Japan and Taiwan "share the same sense of crisis" on the cross-strait situation, and the two sides "affirmed to do what we can on our end," Koichi Hagiuda told reporters after their talks. The last visit to Taiwan by one of the top three LDP officials was in 2003.

The two also expressed opposition to attempts to change the status quo by force, in a veiled reference to China's increasing assertiveness in the region. 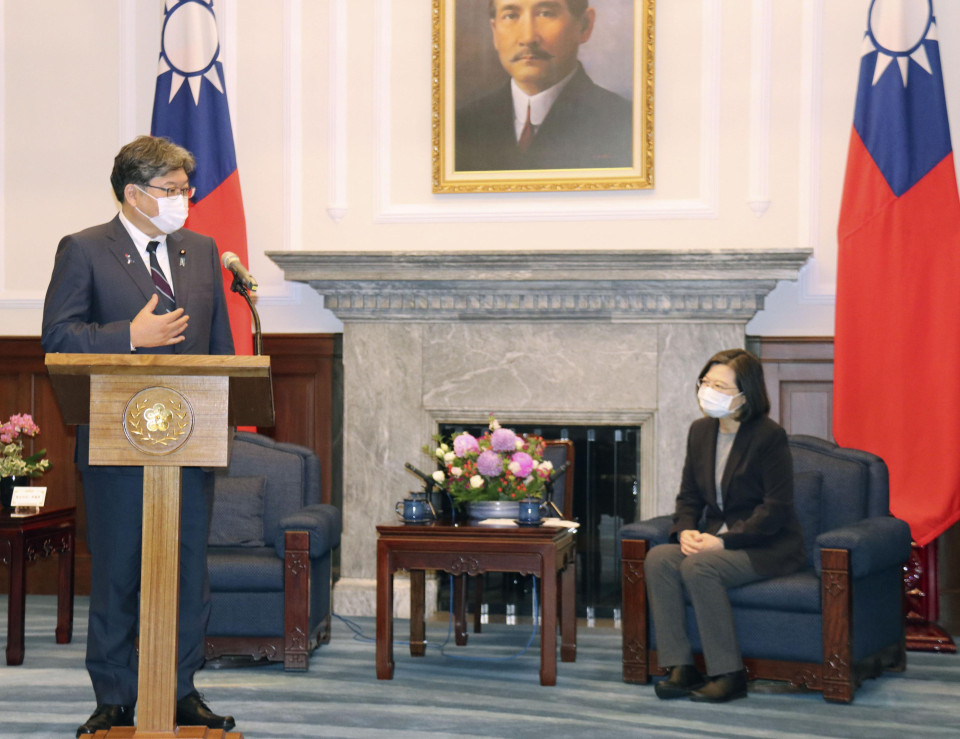 The trip by Hagiuda, who was a close aide to the late former Prime Minister Shinzo Abe, is viewed as a way to carry on Abe's legacy in placing importance on relations with Taiwan.

Hagiuda said during their meeting that Japan shares with Taiwan the "fundamental values of freedom, democracy, basic human rights and the rule of law." He also described the island as an "extremely important partner" with whom his country has close economic ties and exchanges.

Tsai, meanwhile, expressed hope to continue "deepening cooperation with Japan in areas such as security," and said she believes Abe's pursuit of fostering friendship between Taiwan and Japan will "certainly be passed on."

It is the first time one of the three key officials of the LDP -- secretary general, policy chief or head of the General Council -- has visited Taiwan since 2003 when its then policy chief Taro Aso made the trip.

Japan has no diplomatic ties with Taiwan but maintains a close economic relationship.

Tensions between China and Taiwan heightened following a high-profile visit to Taipei in August by U.S. House of Representatives Speaker Nancy Pelosi. Japan's proximity to Taiwan makes any deterioration in cross-strait relations a particular concern.

Tsai also called for cooperation with Japan in realizing a "free and open Indo-Pacific" region, a vision promoted by Japan and the United States to counter China's growing clout.

Taiwan and mainland China have been governed separately since they split due to a civil war in 1949. Beijing regards the island as a renegade province awaiting reunification with the mainland, by force if necessary.

Hagiuda, who was invited by Taiwan and is on a three-day trip from Saturday, also discussed with Tsai about economic cooperation, such as on semiconductors.

He also voiced support for Taiwan's bid to join a free trade pact known as the Comprehensive and Progressive Agreement for Trans-Pacific Partnership, involving countries such as Japan, Australia and Singapore.