An electricity-saving period began in Japan on Thursday, with the government asking people to bundle up indoors and set the heating temperature low, among other steps, for the winter season through March due to power crunch concerns.

It is the first nationwide power saving scheme to span the winter months since 2015, when all of the country's nuclear reactors were offline in the wake of the 2011 Fukushima Daiichi nuclear power plant disaster triggered by a massive earthquake and tsunami. 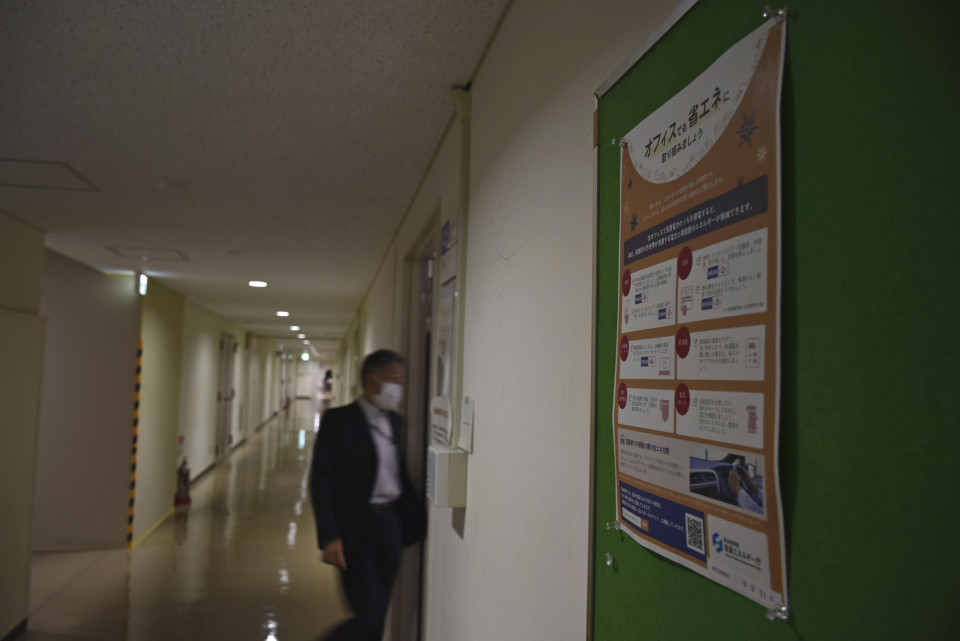 A corridor at the Ministry of Economy, Trade and Industry in Tokyo is dimly lit on Dec. 1, 2022, as an electricity-saving period began in Japan for the winter season through March due to power crunch concerns. (Kyodo)

In cooperation with electricity retailers, the government and utilities will give incentives to power-saving consumers through point reward systems.

While Japan is expected to secure a reserve power supply capacity rate of 3 percent, the minimum level deemed necessary to provide stable supply, for the winter, the government wants to make sure that there will be enough power to heat homes and maintain businesses even in the face of unforeseen circumstances such as natural disasters and glitches at power plants.

To save electricity, people are asked to wear more clothes indoors, set heating to lower temperatures, install thicker curtains, and turn off lights when not needed, among other measures.

Among companies making responses, Sony Group Corp. said it will turn off billboard signs when the supply-demand balance of electricity becomes constricted.

The government plans to award points, equivalent to around 2,000 yen ($14), to all households that register for the conservation program. Those which cut monthly electricity consumption by 3 percent or more compared with the previous year in three billing cycles from New Year's Day will be given additional points worth around 1,000 yen each month.

The electricity supply and demand balance is expected to be tightest in January, during which the reserve supply capacity is projected at 4.1 percent in eastern and northeastern Japan areas serviced by Tokyo Electric Power Company Holdings Inc. and Tohoku Electric Power Co.

The reserve rates in other parts of the country are also expected to exceed 3 percent.

In March, Japan faced the risk of large-scale power outages after a powerful earthquake struck northeast Japan that halted several thermal plants during a cold snap.

The government has also said it intends to speed up efforts to restart nuclear reactors that meet stringent safety standards, implemented after the 2011 nuclear disaster, as a way to ensure stable power supply.

Japan had a three-month power conservation period in the summer for the first time in seven years as well to prevent a power crunch.