Indonesian authorities declared a top alert status Sunday after a volcano on the main island of Java erupted, spewing a thick column of ash 1.5 kilometers into the sky.

Japan's weather agency had warned a tsunami could arrive at the islands of Miyako and Yaeyama in Okinawa Prefecture following the eruption, which took place at around 11:18 a.m. Japan time. But it later said no tsunami occurred in Japan.

Indonesian authorities raised the status from level 3 to 4 following the increasing activities of the volcano, Mt. Semeru in East Java Province. 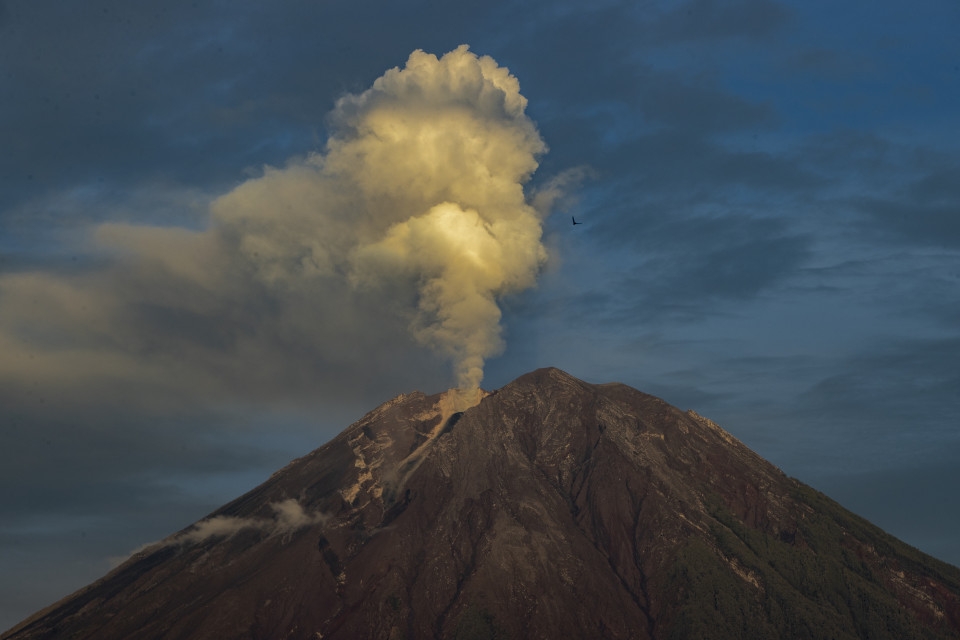 Mount Semeru erupted and killed and injured many people after it unleashed lava and thick columns of hot ash that buried a number of villages on its slope in the East Java district of Lumajang, Indonesia on December 4, 2021. (NurPhoto/Getty/Kyodo)

The eruption sent hot gas clouds 19 kilometers down the slopes, while lahar or cold lava could potentially flow 17 km down, according to the Center for Volcanology and Geological Hazard Mitigation in the West Java provincial capital of Bandung.

The center warned local residents not to conduct any activities within a radius of 5 km of the crater, so as not to get hit by volcanic debris, and 500 meters from the riverbanks to prevent from being swept away by lahar as rain fell.

In a related development, the Jakarta-based National Disaster Mitigation Agency said masks have been distributed to people living near the 3,676-meter-high mountain, the highest on the Java island.

An eruption of the volcano, located about 700 km southeast of the capital Jakarta, exactly one year ago killed more than 50 people.