Japan's lower house on Thursday passed a bill to ban organizations from maliciously soliciting donations, following controversy over the fundraising practices of the Unification Church.

After deliberations at the House of Councillors, or upper house, starting in the afternoon, the bill is likely to be enacted in favor of the ruling bloc and some opposition parties on the final day of the extraordinary parliamentary session on Saturday. 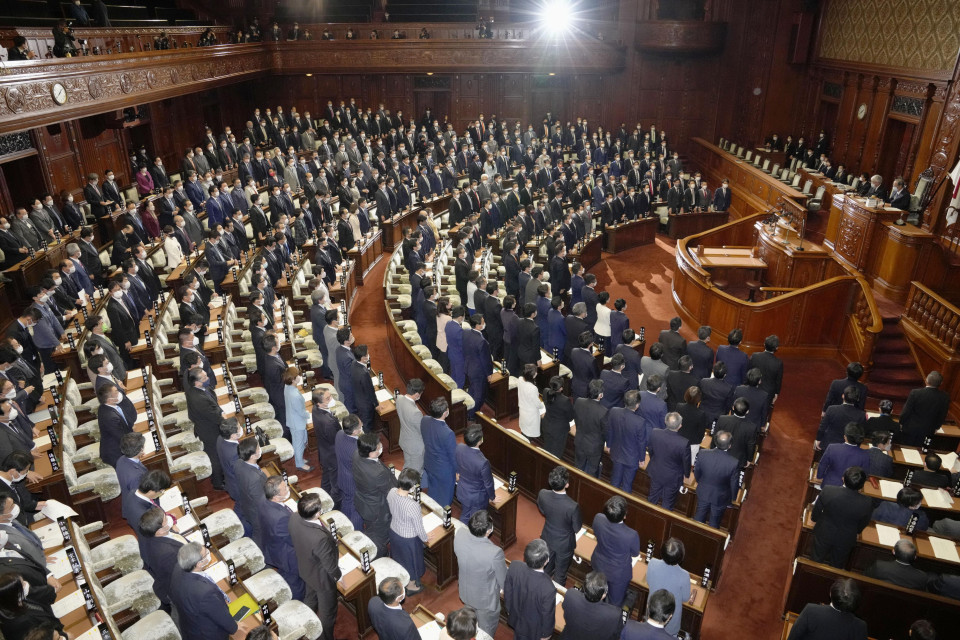 The House of Representatives passes a bill to ban organizations from maliciously soliciting donations, during a plenary session in the parliament in Tokyo on Dec. 8, 2022. (Kyodo)

Prime Minister Fumio Kishida's government rushed to craft the bill in an apparent bid to curb a plunge in the approval ratings for the Cabinet, triggered by issues surrounding the religious group established by a staunch anti-communist in South Korea in 1954.

Some lawyers supporting people who have suffered financial ruin by giving large donations to the Unification Church have criticized the hastily compiled bill for having many deficiencies, saying it may not go far enough in rescuing the group's victims.

At a House of Representatives committee meeting on Thursday, Kishida said the government will try to improve its consultation with victims of the Unification Church so that the envisioned law can be "more effective."

The premier also expressed his readiness to meet with victims of the religious group after the bill is enacted, with Kishida already having held closed-door meetings with them last month.

While the bill was prepared after the Unification Church's fund-raising practices, including claims made about spirits, had been called into question, the planned legislation would cover all organizations, not just religious ones.

The bill seeks to prohibit organizations from "confusing" people to solicit donations through tactics such as "stoking fear" by using unreasonable spiritual claims.

Under the bill, members of groups engaged in unfair solicitation could face a prison sentence of up to one year or a fine of up to 1 million yen ($7,300). It would also allow spouses and dependent children of donors to cancel donations on their behalf.

One of the contentious points in arranging the bill was how to deal with donations by people under the influence of brainwashing.

Some opposition parties and lawyers called for a clause that would allow for the cancellation of donations and the punishment of members of suspicious organizations if the money was paid under brainwashing conditions.

But the government rejected the request, saying it would be difficult to define such a state of mind in legal terms.

Instead, the Kishida administration incorporated a clause in the bill obliging groups "not to suppress the free will" of donors to dissuade them from receiving donations maliciously.

The clause would also allow the government to make public the names of organizations that do not abide by the rule, although it does not involve prison terms or fines.

Kishida, meanwhile, has explained that under the new legislation, people affected by brainwashing would be able to cancel their donations.