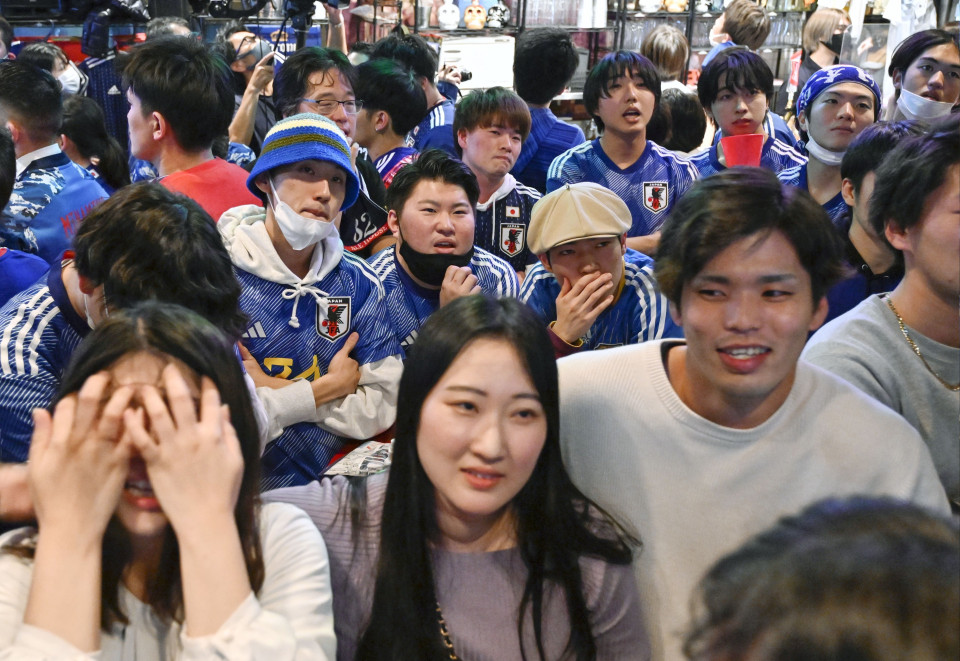 Japan supporters look downcast at a sports bar in Tokyo's Shibuya area in the small hours of Dec. 6, 2022, after a 3-1 penalty shootout defeat to Croatia in a World Cup round of 16 football match at Al Janoub Stadium in Al Wakrah, Qatar. (Kyodo) ==Kyodo

Fans and supporters extended their appreciation and encouragement to Japan's football players on Tuesday after they exited the World Cup in a stinging shootout loss to Croatia.

While the Samurai Blue were unsuccessful in their bid to reach the quarterfinals of the tournament for the first time, many people were hopeful of the team's future after earlier witnessing strong performances including thrilling comeback wins against giants Germany and Spain.

"I didn't expect them to come this far, and I felt their real strength," said Wataru Kakuta, 32, who was among the many businessmen in Tokyo who were commuting to their offices with sleepy eyes after watching the latest game in the early hours of Tuesday.

"I want to thank them for giving us hopes and dreams. There are young, world-class players too, so I am looking forward to seeing the future of the Japan team," he said.

Screams and groans filled sports bar Fields in Tokyo's Shibuya district when Croatia won 3-1 on penalties following a 1-1 deadlock at the end of extra time in round 16, but they quickly turned to applause and cheering for all the effort Japan made. 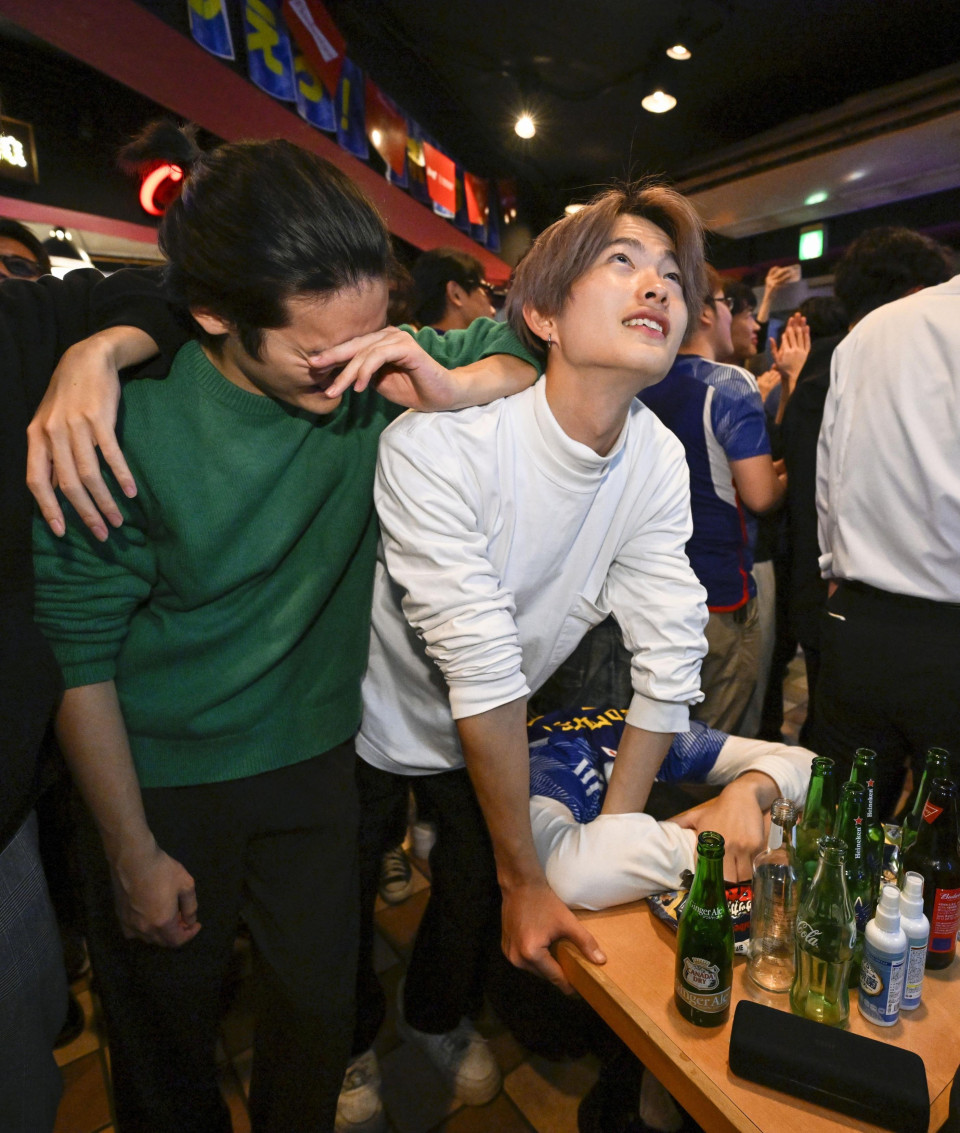 Japan supporters look downcast at a sports bar in Tokyo's Shibuya area after a 3-1 penalty shootout defeat to Croatia in a World Cup round of 16 football match at Al Janoub Stadium in Al Wakrah, Qatar, in the small hours of Dec. 6, 2022. (Kyodo) ==Kyodo

"I wanted them to rewrite history by advancing to the best eight," said Sora Hatanaka, a 21-year-old university student from Kawasaki near Tokyo, adding, "I hope they will make another attempt at it in four years and eventually become World Cup champions."

Prime Minister Fumio Kishida praised the team in a Twitter post he made Tuesday, saying, "They gave us courage and inspiration by playing without giving up until the very end."

He also thanked the team's players, manager and others involved for ushering in a "new era of Japanese soccer."

Families, friends and supporters of Japan players also expressed gratitude for their contributions and said the players should hold their heads high returning home.

Masaki Asano, the 31-year-old brother of Takuma Asano, who was substituted on in the second half, said after the game, "I want to tell (Takuma), don't be discouraged now but shine four years later as a veteran player."

In Amagasaki, Hyogo Prefecture, where winger Ritsu Doan grew up, Shuji Wada, 67, who represents a local shopping district, said, "The outcome was regrettable, but I feel that he has become a world-class player."

"I also want to thank him for bringing joy to Amagasaki," he said.

One man in his 20s in Osaka praised Daizen Maeda, who scored his first goal at the World Cup just before the end of the first half saying, "He applied strong pressure against his opponents throughout the World Cup." 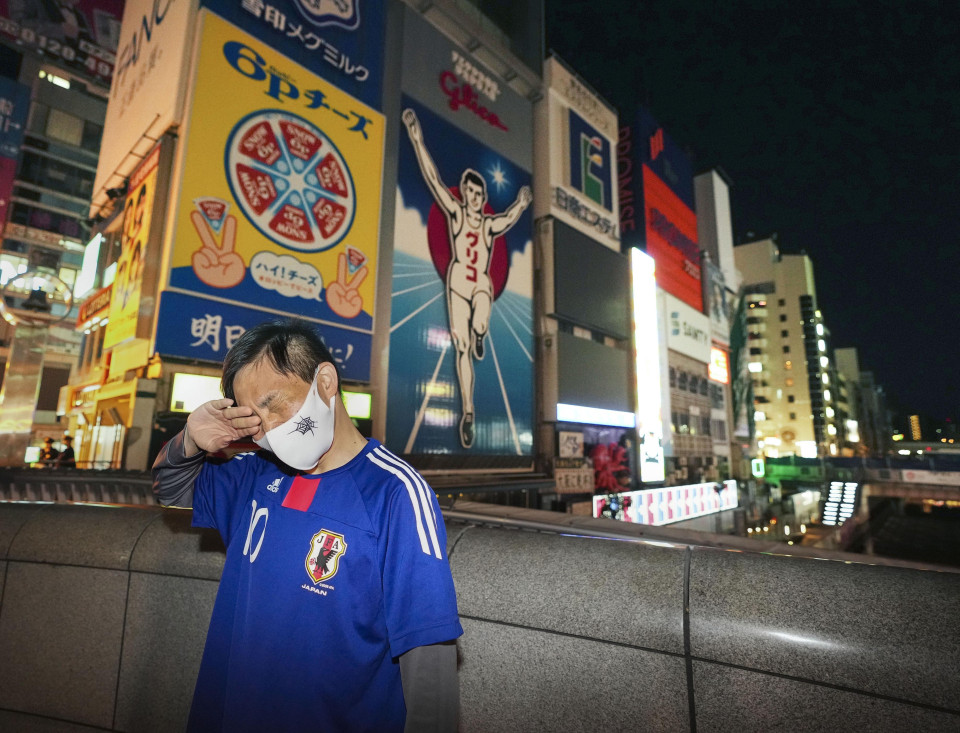 A man appears to be crying in Osaka's Dotonbori area in the small hours of Dec. 6, 2022, after Japan's defeat to Croatia in a World Cup round of 16 football match in Qatar. (Kyodo) ==Kyodo

For the residents of Tokamachi, Niigata Prefecture, there were cheers for Japan and Croatia both due to strong ties built with Croatia after the city was chosen as the venue for the Croatian team's training camp for the 2002 World Cup co-hosted by Japan and South Korea.

"I'm glad I was able to cheer for both teams," said Miyuki Chihara, 50, who watched the game until the end in the early hours of Tuesday at a public viewing venue in the city.

Ryoichi Kamimura, 75, who had worked to bring the Croatian team to the city as a Tokamachi official then, welcomed Croatia's victory, saying their close relationship with Croatia "will continue into the future."