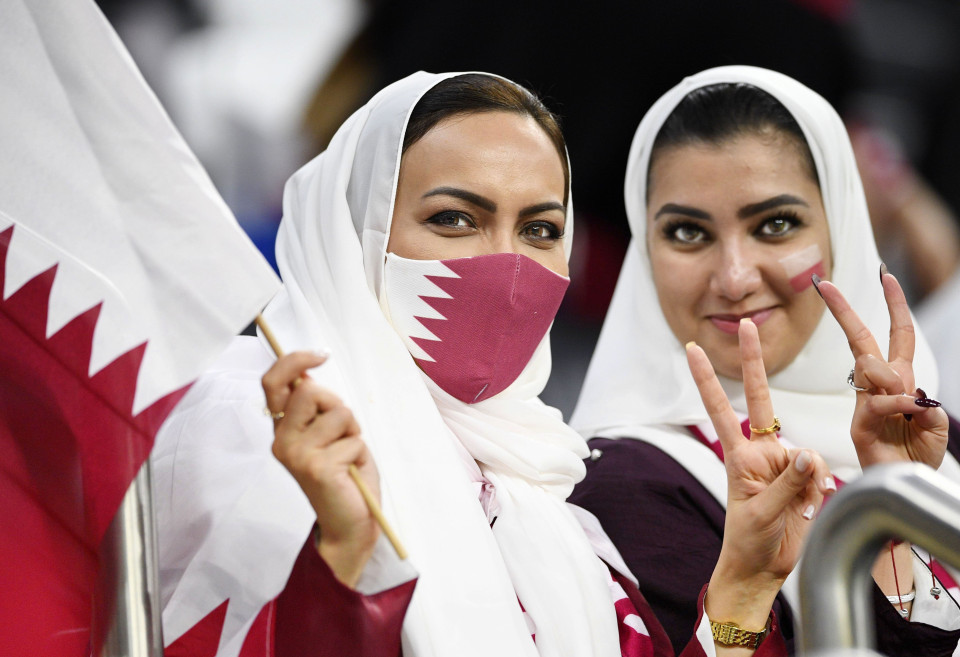 Supporters of Qatar pose ahead of a World Cup Group A football match between Qatar and the Netherlands at Al Bayt Stadium in Al Khor, Qatar, on Nov. 29, 2022. (Kyodo) ==Kyodo

TOKYO - Japan's government on Thursday approved a bill aimed at helping people who suffer financial hardship as the result of donations solicited by controversial religious organizations such as the Unification Church.

The bill would allow followers and their family members to cancel such donations if they were solicited maliciously, while banning religious corporations from asking believers to borrow money for donations.

TOKYO - An electricity-saving period began in Japan on Thursday, with the government asking people to bundle up indoors and set the heating temperature low, among other steps, for the winter season through March due to power crunch concerns.

It is the first nationwide power saving scheme to span the winter months since 2015, when all of the country's nuclear reactors were offline in the wake of the 2011 Fukushima Daiichi nuclear power plant disaster triggered by a massive earthquake and tsunami.

BEIJING - Chinese President Xi Jinping called for the Ukraine crisis to be resolved through political means in his talks with EU chief Charles Michel in Beijing on Thursday, state media said.

Xi said a political settlement of the crisis is in "the best interest of Europe and the common interest of all countries in Eurasia," China Central Television reported after the meeting between the Chinese leader and the European Council president.

TOKYO - A former student leader of the 1989 pro-democracy Tiananmen Square protests said Thursday that the recent eruption of demonstrations against China's "zero-COVID" policy and the government, in a rare display of public anger has moved the country into a "new era."

Wang Dan, who lives in exile from China, spoke in the wake of protests that emerged over the weekend across the country, including a demonstration by about 1,000 people in central Beijing early Monday. Some protestors have made rare calls for President Xi Jinping and the Communist Party to step aside.

TOKYO - The U.S. dollar briefly dropped to a three-month low in the 135 yen zone Thursday in Tokyo, falling by over 2 yen after U.S. Federal Reserve Chairman Jerome Powell signaled a slowing in the pace of interest rate hikes.

After trading in the lower 138 yen level late Wednesday in New York, the U.S. currency plunged to its lowest level against the yen since August, driven by Powell's remarks earlier in the day that the Fed may start slowing the pace of rate increases as soon as December.

After the 22-year-old became Nippon Professional Baseball's youngest batting Triple Crown winner in October, fans coined the word "Murakami-sama" in a play with words over his name and the kanji Chinese character "kami," which means god in Japanese, and further added the honorific suffix "-sama."

TOKYO - The 2025 world athletics championships in Tokyo will be held on Sept. 13 to 21, the athletics world governing body said Wednesday.

World Athletics initially wanted the meet at the National Stadium to be held in late August, but organizers in Japan said mid-September would be better given the intense summer heat.

SHIZUOKA, Japan - A private nursery school in Shizuoka Prefecture, central Japan, has been found to have engaged in repeated physical and verbal abuse of toddlers in its care, including holding them upside down by their feet, according to local authorities.

The city government of Susono said Wednesday it is considering filing a criminal complaint on suspicion of assault or threatening behavior after confirming 15 cases of abuse involving three teachers at the school, called Sakura Hoikuen.