Japan decided Friday to acquire the capability to strike enemy bases and double defense spending in a dramatic shift in its postwar security policy under the nation's war-renouncing Constitution, provoking a harsh backlash from China.

With the security environment surrounding Japan becoming unstable amid threats from China, North Korea and Russia, Tokyo, which has rejected warfare for the past 77 years, will be able to directly attack another country's territory in case of an emergency.

Obtaining the ability to deter attacks from outside forces, called a "counterstrike capability," was stipulated in the government's three key defense documents, including the National Security Strategy, updated by Prime Minister Fumio Kishida's Cabinet.

Critics note that the Constitution only allows Japan to act in self-defense, but the NSS said the nation needs to have the ability to "make effective counterstrikes in an opponent's territory as a bare minimum self-defense measure."

The NSS mentioned that Japan is facing the "most severe and complicated security environment" since World War II, while the government has pledged to stick to its commitment to the "exclusively self-defense-oriented policy" and "not to become a military power."

In their first revision since 2013, the long-term security policy guidelines said that missile defense alone is insufficient to deal with the "significant reinforcement of missile forces" by Japan's neighboring countries, which have opposed its renewed defense policy. 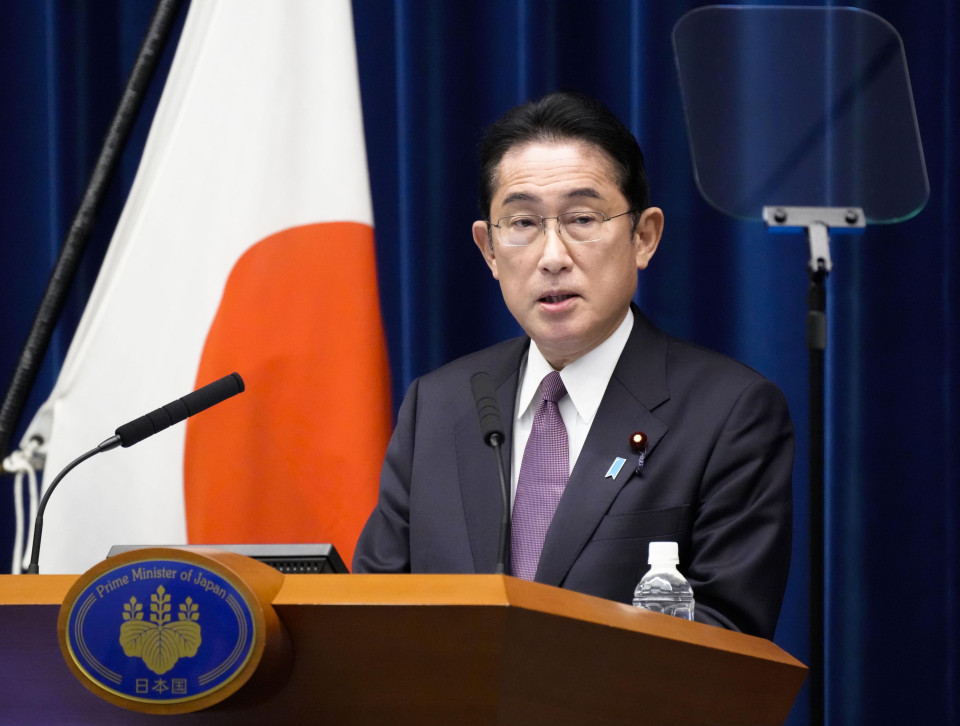 Kishida said at a press conference after the Cabinet gave approval for the updated security documents that Japan's obtainment of a counterstrike capability will be "essential" to deter missile attacks from other nations.

To fundamentally beef up its defense capacity, Japan set a target of boosting its annual defense budget to 2 percent of gross domestic product in fiscal 2027, which ends in March 2028.

Japan has long capped its annual defense budget at around 1 percent of GDP, or a little more than 5 trillion yen ($36 billion).

Emphasizing that Japan's defense buildup is needed to bolster its "diplomatic power," Kishida said his administration will defend the country and its people during a "turning point in history."

In a bid to avoid unnecessary confrontation with China and other nations, Kishida also promised to continue carefully explaining Japan's defense policy to its neighbors.

Kishida said at a ruling party meeting earlier Friday the government will earmark around 8.9 trillion yen for the fiscal 2027 defense budget.

Later in the day, the premier said his administration will raise additional funds by cutting other expenditures and increasing taxes among other measures, while stopping short of referring to when the government will carry out the tax hikes. 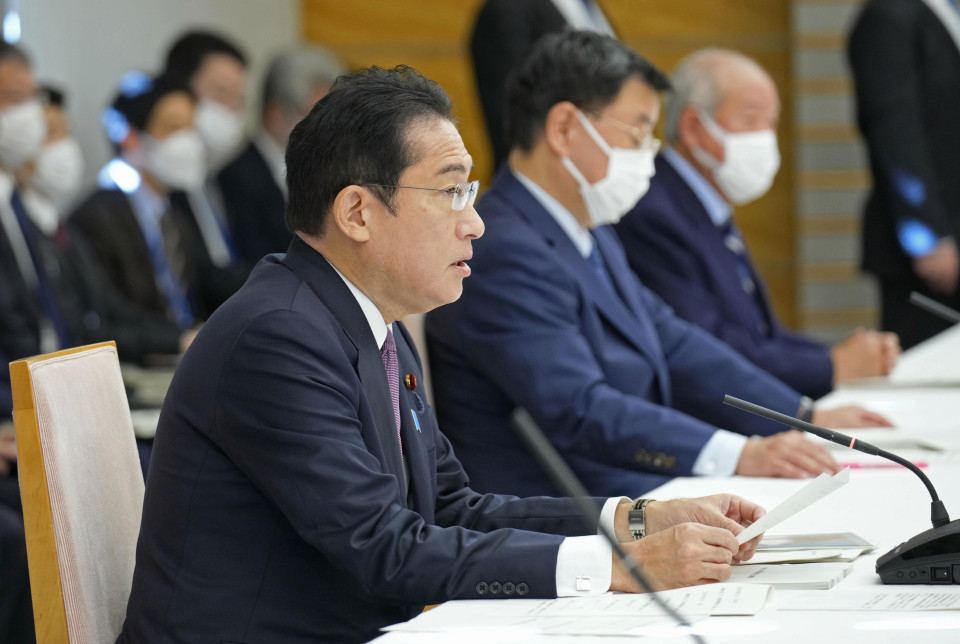 Some lawmakers from his Liberal Democratic Party have argued that more national debt should be issued, as public distrust in the government has been growing over envisioned tax increases to finance the increase in defense spending.

The initial defense budget for fiscal 2023 is expected to reach a record of around 6.5 trillion yen, compared with 5.2 trillion yen for fiscal 2022. Both exclude spending on the realignment of U.S. Forces in Japan.

If realignment-related spending is included, the fiscal 2023 budget would be around 6.8 trillion yen, a government source said.

Out of the 43 trillion yen, some 5 trillion yen will be used to acquire "standoff missiles," which are capable of being launched from beyond the range of enemy fire by extending the range of Self-Defense Forces' surface-to-ship guided missiles, as well as procuring U.S.-made Tomahawk cruise missiles with a range of about 1,600 kilometers.

Japan could launch a counterstrike under three conditions -- if Japan is attacked or an attack on a friendly nation threatens Japan's survival; there are no appropriate means to repel an attack; and as long as any use of force is kept to a minimum.

Regarding the timing of when an opponent's attack is deemed to have started, the government would "judge given specific and individual conditions," according to a source familiar with the matter.

The LDP initially employed the words "enemy base strike capability" but stopped using the phrase after its junior coalition partner Komeito raised fears that it could imply the right to pre-emptive attacks.

Japan has long maintained that enemy base strike capabilities are permissible at the bare minimum as a self-defense measure under its pacifist Constitution.

But the government had refrained from acquiring it as a political judgment or had seen no need to do so under the 1960 security treaty with the United States, as Washington has served as an offensive "spear" and Tokyo as a defensive "shield."

Following Japan's acquisition of its counterstrike capability, the two countries would "collectively respond" to an armed attack, although its basic role-sharing would remain unchanged, the NSS said.

Regarding Japan's current perception of Chinese military moves, the policy guidelines said they are posing "the greatest strategic challenge" ever, similar to an expression in the U.S. NSS released in October.

Japan's 2013 NSS said China's military assertiveness is "an issue of concern to the international community."

The latest Japanese NSS also described moves by North Korea as a "graver and more imminent threat than before" and those by Russia as a "serious security concern" due to its "strategic collaboration with China," as well as its invasion of Ukraine.

Japan's government, meanwhile, will consider reviewing its strict guidelines regarding the export of defense equipment.

Other goals in the documents included strengthening the nation's cyber defense, enhancing economic security and deepening cooperation between the SDF and the Japan Coast Guard. 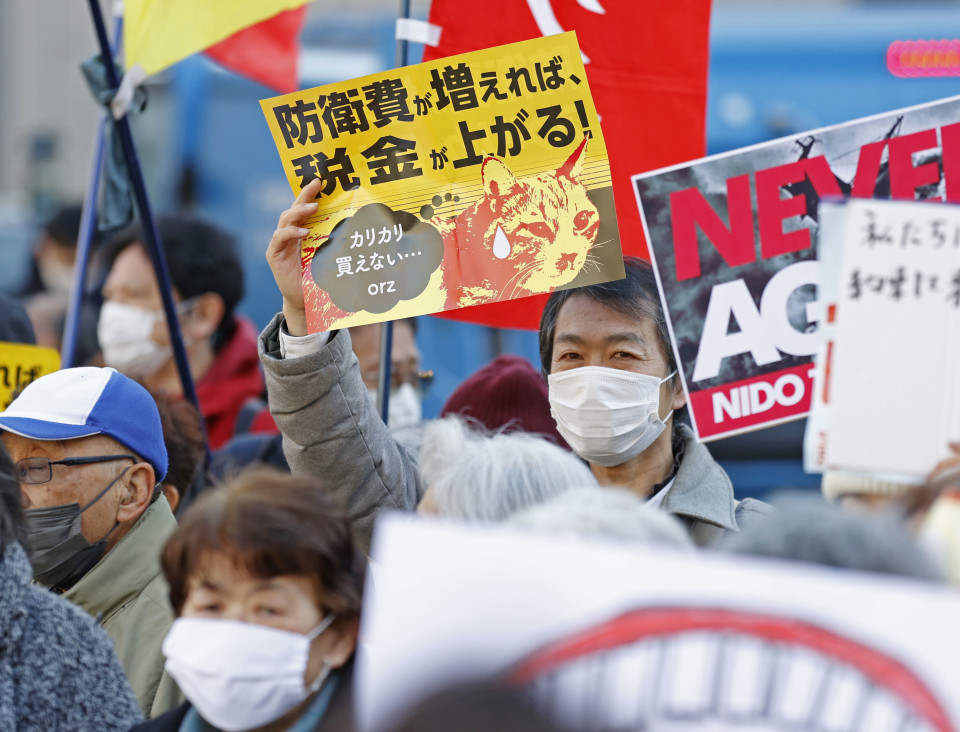 People protest against raising Japan's defense spending in front of the prime minister's office in Tokyo on Dec. 16, 2022. (Kyodo) ==Kyodo

-- will allocate about 43 trillion yen ($315 billion) for defense budgets over five years from fiscal 2023, setting target of boosting annual defense spending to around 2 percent of GDP in fiscal 2027.