Japan manager Hajime Moriyasu on Thursday took the opportunity to revel in his team's historic 2-1 World Cup win over Germany, with even injuries to defenders Hiroki Sakai and Takehiro Tomiyasu, as well as some pesky sprinklers, unable to dampen his mood.

"Yesterday's game developed in some ways how I envisioned. The players made good decisions, and communicated with each other well," said Moriyasu just after he and the press pack had to scamper to escape sprinklers that were watering the pitch ahead of training in Doha.

Soon after Moriyasu finished speaking, team media officer Hiroshi Tada said Sakai suffered a left hamstring injury at Khalifa International Stadium the night before and Tomiyasu a similar one to his right.

Speaking about his much-heralded tactical shift against Germany, Moriyasu said it did not come out of the blue.

"We mostly used four backs in training, but in the September friendlies we talked about the possibility of switching to three," he said. 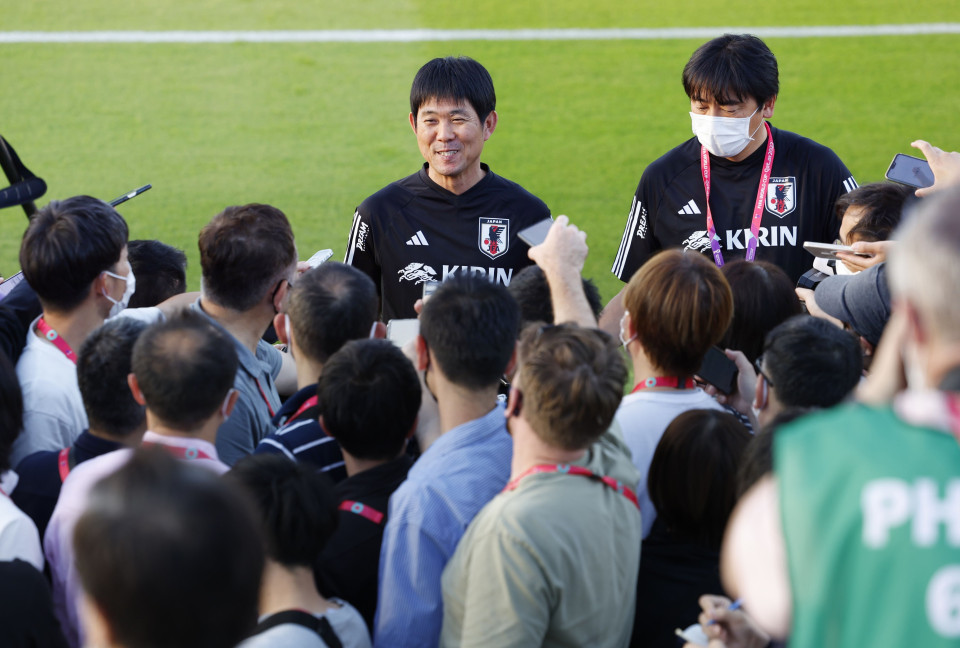 Japan manager Hajime Moriyasu speaks to reporters ahead of training in Doha on Nov. 24, 2022, a day after his squad's World Cup victory over Germany. (Kyodo)

Later Thursday, veteran backup goalkeeper Eiji Kawashima praised his manager's game plan, saying there was never a sense of panic in the squad.

"In the first half, (we thought) if we can keep it 1-0, in the second half we are thinking we can make or change something. So, we were lucky that the second goal was offside but this score was really good for us," the 39-year-old Strasbourg goalkeeper said.

Despite being vastly experienced, with this being his fourth World Cup, he said he still struggles to explain the feeling of joy he experienced when Takuma Asano scored the unlikely and late winner on Wednesday night.

"We felt like, really, one team," he said. "It is difficult to explain after a victory like that yesterday."

Japan's current first-choice goalkeeper Shuichi Gonda was Kawashima's understudy at the 2014 World Cup. When asked to assess the player who is now ahead of him, Kawashima was very complimentary.

"He made a really good performance and he led the team in a really good way. Yeah, he was really decisive for the team," he said.

Kawashima was particularly impressed with how Gonda bounced back after giving away a penalty that put Japan in a one-goal hole.

"(The penalty) was unlucky, but it was important that he recovered afterward to keep himself in a good way," he said.