U.S., Japan, others to help Indonesia with $20 bil. climate financing

The United States, Japan and other countries on Tuesday announced a long-term energy transition partnership with Indonesia that aims to mobilize $20 billion in public and private financing to help the Southeast Asian country achieve its climate targets.

Japanese Prime Minister Fumio Kishida welcomed the launch of the partnership, saying that his government hopes to help accelerate Indonesia's "realistic but ambitious transition from coal to renewable alternatives" with further private-sector engagement. 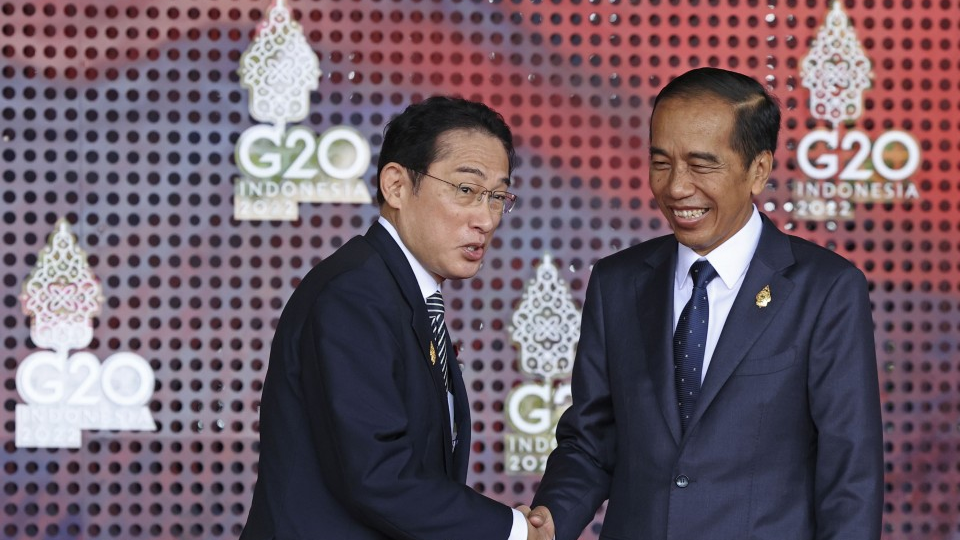 Japanese Prime Minister Fumio Kishida (L) is greeted by Indonesian President Joko Widodo at the venue of the Group of 20 summit in Nusa Dua on the Indonesian resort island of Bali on Nov. 15, 2022. (Pool photo) (Kyodo) ==Kyodo

The announcement was made on the sidelines of a summit of the Group of 20 major economies on the Indonesian resort island of Bali.

The Just Energy Transition Partnership is expected to help coal-reliant Indonesia's total power sector emissions peak by 2030, earlier than previously projected, and establish a goal for it to reach net zero emissions in the sector by 2050, bringing forward the target by 10 years.

The $20 billion will be financed from the public sector -- the Group of Seven members and Norway and Denmark -- and the private sector, using a mix of grants, concessional loans, private investments and other means over a three-to-five-year period.

The G-7 members are Britain, Canada, France, Germany, Italy, Japan and the United States, plus the European Union.

Over the next six months, the countries in the partnership will work together to develop a concrete plan for investments, financing, and technical assistance to support Indonesia's climate goals.

Indonesian President Joko Widodo was quoted in a joint statement as saying that "Indonesia is committed to using our energy transition to achieve a green economy and drive sustainable development."

According to the International Energy Agency, the resource-rich nation is the world's fourth-largest producer of coal.