China on Tuesday renewed its commitment to the radical "zero-COVID" policy despite rare nationwide protests against lockdowns and other strict anti-virus measures over the weekend as it sought to prevent any further display of public anger with massive police deployment.

The People's Daily, the flagship newspaper of the ruling Communist Party, maintained Tuesday the existing policy has proved "scientific and effective" and warned against complacency in the nation's efforts to curb the pandemic.

The paper also pointed out targeted approaches must be taken based on the Chinese government's recent decision to "optimize" COVID response measures to rectify "excessive" policy steps. The eased steps include shorter quarantine periods and exempting home-bound residents from mass COVID screening.

As some demonstrators openly denounced the ruling Communist Party led by President Xi Jinping, defying fears of persecution, his leadership is expected to take steps to prevent the anti-lockdown rallies from developing into a major political movement and to adjust the COVID restrictions to reduce public frustrations. 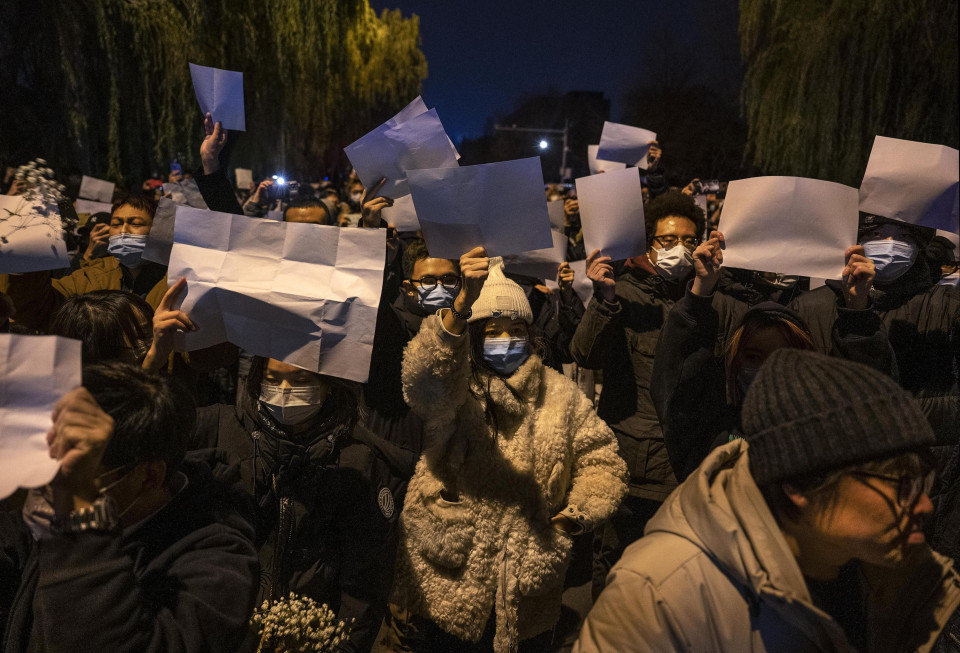 People hold up white sheets of paper in protest against China's strict zero COVID measures in Beijing on Nov. 27, 2022.(Getty/Kyodo)

Heavy police presence has been confirmed in areas where demonstrations occurred in Beijing and Shanghai. Several human rights lawyers said some participants of the rallies had been taken away by authorities and that students have been under increased pressure not to join protests.

On Monday, China had logged daily COVID-19 cases of some 37,000 in the mainland, according to the National Health Commission, a slight decline after the figure had hit record highs for five straight days through Sunday.

The Chinese government said Tuesday it will speed up vaccinations of the elderly against COVID-19, especially for those aged 80 or older.

The United Nations, the United States and some European countries have called on Beijing to ensure the right to peaceful protests.

Chinese Ambassador to the United Nations Zhang Jun defended the country's stringent COVID restrictions, telling Qatar-based broadcaster Al Jazeera on Monday in New York, "You might say you prefer more liberty, more freedom, but then you have to be prepared to die."

The ambassador noted some countries with eased COVID regulations have done so "at the sacrifice of the people."