A small company selling Japanese-crafted socks in the United States has provided a welcome leg-up to leading regional producers in western Japan, bringing new business to an industry that is struggling to secure its future.

Maari Wada, 47, president of Live Your Color Inc., has found a niche for her signature item -- fashionable, made-to-last socks with Japanese-themed motifs -- she sells in the United States where mass-produced, mass-consumed fast fashion reigns.

Wada traveled stateside in 2001 and founded the company, which, in 2006 began to specialize in the sale of socks. In past years, her company had focused on the online sale of American brand products, such as Coach, for Japanese consumers. 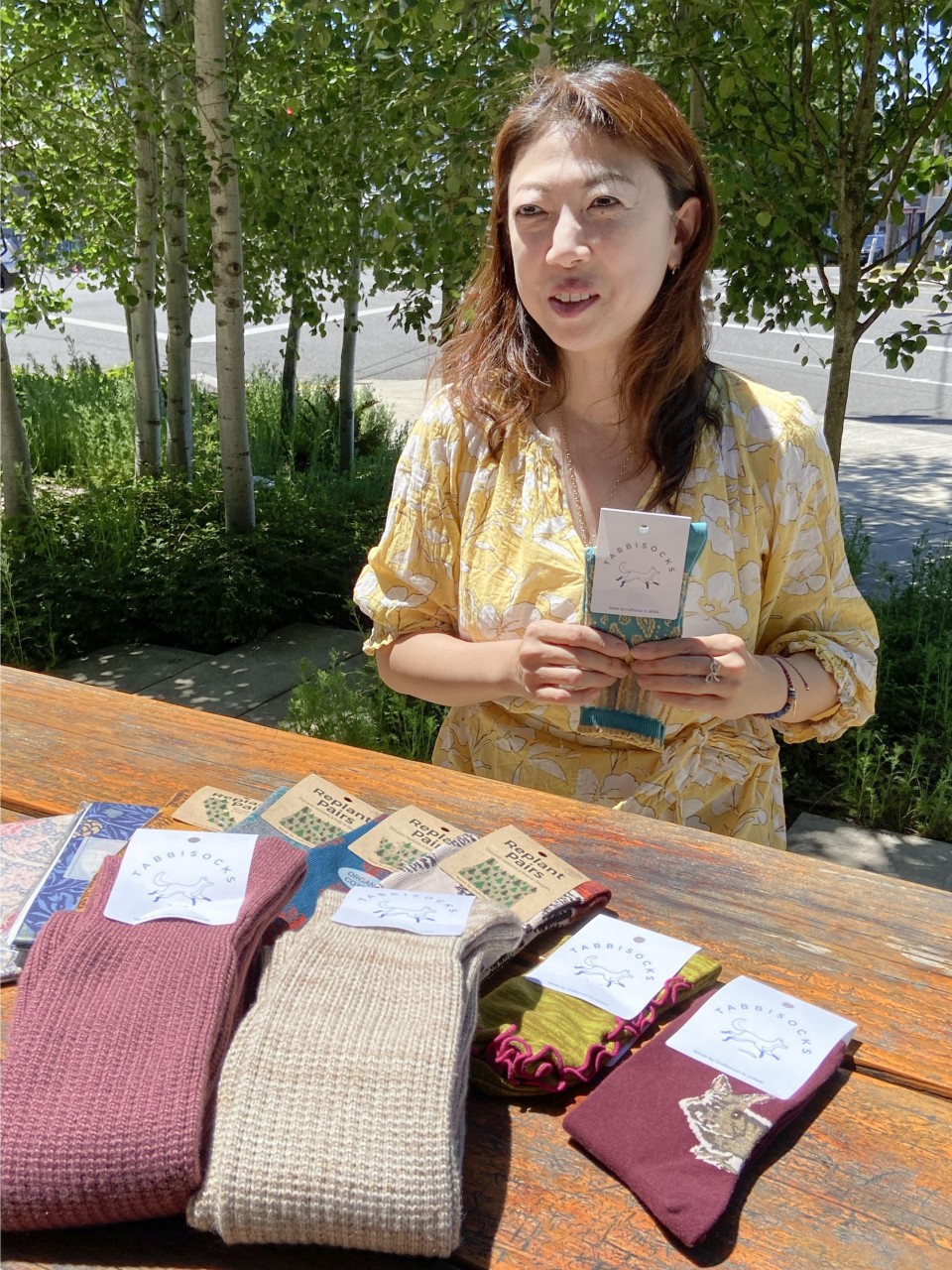 Maari Wada, owner of Live Your Color Inc., a hosiery textile business based in Portland, Oregon, explains her sock lineup in June 2022. (Kyodo)

Unable to find fashionable, long-lasting socks in the United States, she decided to offer products going the other direction from Nara Prefecture, western Japan, known as Japan's mecca of high-quality sock production.

"You can't really find stylish, durable socks in the United States," Wada said, explaining that her company's name reflects her wish to embody fashion with a taste of Japanese culture and skill that allows people to express themselves in fun, unique ways.

Initially, Wada purchased discontinued sock product lines made in Nara of different sizes and colors and had them shipped to the United States.

Unexpectedly, orders for tabi-type socks came pouring in from people on the West Coast who found the traditional Japanese split-toed footwear easy to wear with beach sandals. 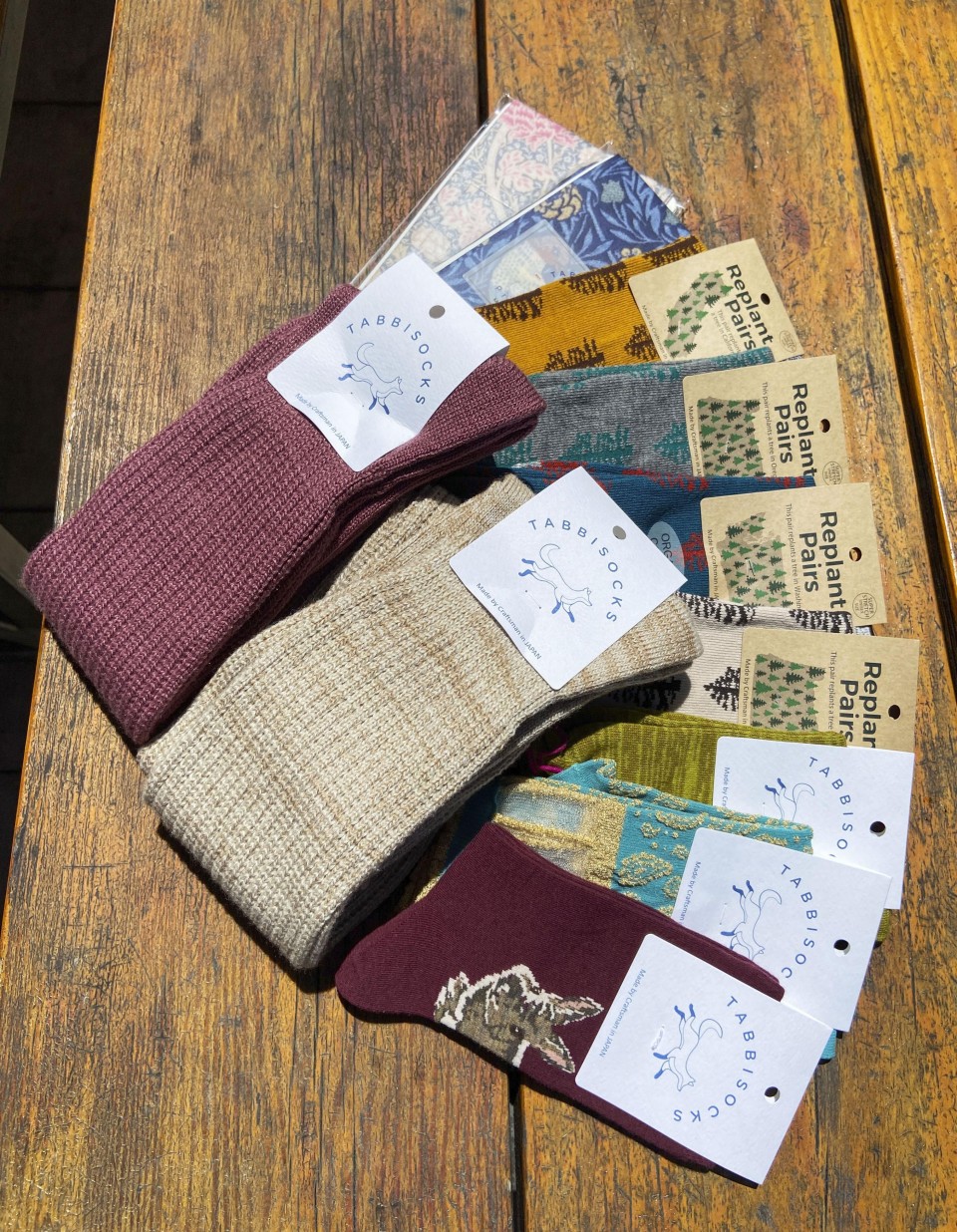 Socks sold by Live Your Color, Inc., a hosiery textile business based in Portland, Oregon, are pictured in June 2022. (Kyodo)

Wada said that their durable yet soft texture and comfort set them apart from cheap, mass-produced items in the United States which people purchase as if they were disposable. Some popular socks feature bold motifs with geisha girls and shiba inu dogs.

Wada hopes that Nara's flagging sock industry will be supported by the demand her company creates, helping struggling factory owners who are trying to navigate an aging workforce and a lack of successors.

One craftsman who had been supporting Wada since the early days of her business decided to close shop due to old age. Relying on her connections, Wada approached Shinichi Sakamoto, 42, who runs a sock factory with his father in Yamatotakada, Nara Prefecture, to ask him to take over the elderly artisan's knitting machine.

The machine that Sakamoto took over had undergone repeated modifications over about 50 years and had taken on a new form. His fuse ignited, Sakamoto set out to master the machine's operation and after about six months of trial and error, he was able to weave socks reliably. 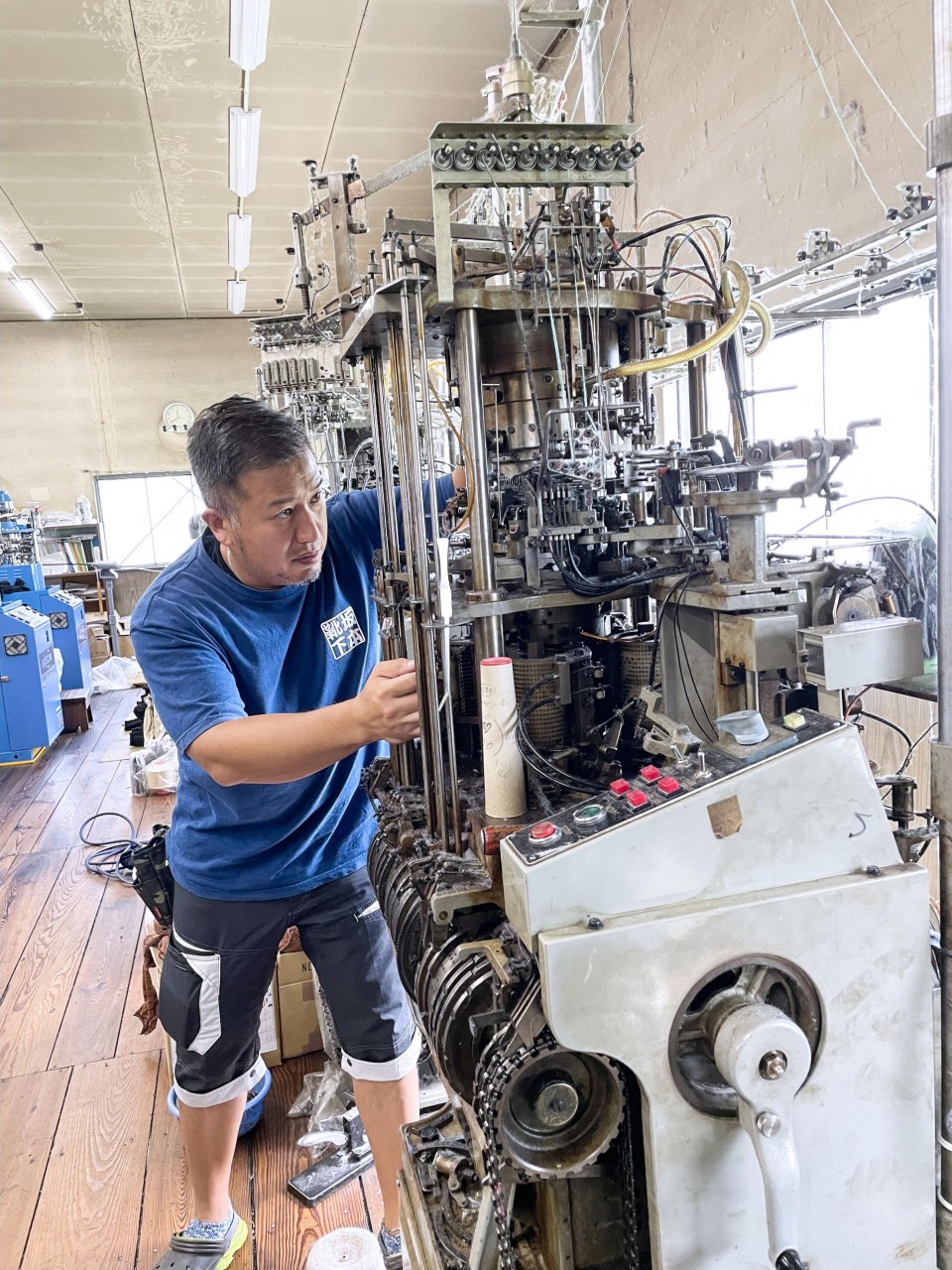 Undated photo shows Shinichi Sakamoto checking on a sock knitting machine he took over from a factory that went out of business in the region, at his workshop in Nara Prefecture, western Japan. (Photo courtesy of Shinichi Sakamoto)(Kyodo)

Hosiery textile production has shifted to China and other countries where labor costs are cheaper, while imports account for more than 90 percent of the socks sold in Japan. These factors make it impractical for domestic producers to compete on price.

For the survival of domestic sock makers, "production of environmentally-friendly products is important," Wada said. While it is considered difficult to knit socks using cotton and other natural fibers without incorporating chemical fibers, Wada is still optimistic about the advanced techniques of Sakamoto, among others.

Sakamoto produces long, loose wool socks that require constant attention while the loom operates. The machine can produce only about 500 pairs of socks per month, one-tenth the output of a modern machine.

In October, Wada began selling the new socks online in Japan for 4,800 yen ($33) with 150 yen per pair of socks donated to a nonprofit organization operating "children's cafeterias" to provide food to needy children in the country.

"In the United States, I also learned the importance of businesses contributing to the improvement of local communities," Wada said. She said her journey to sell high-quality socks from Japan in the United States and elsewhere has a long way to run.