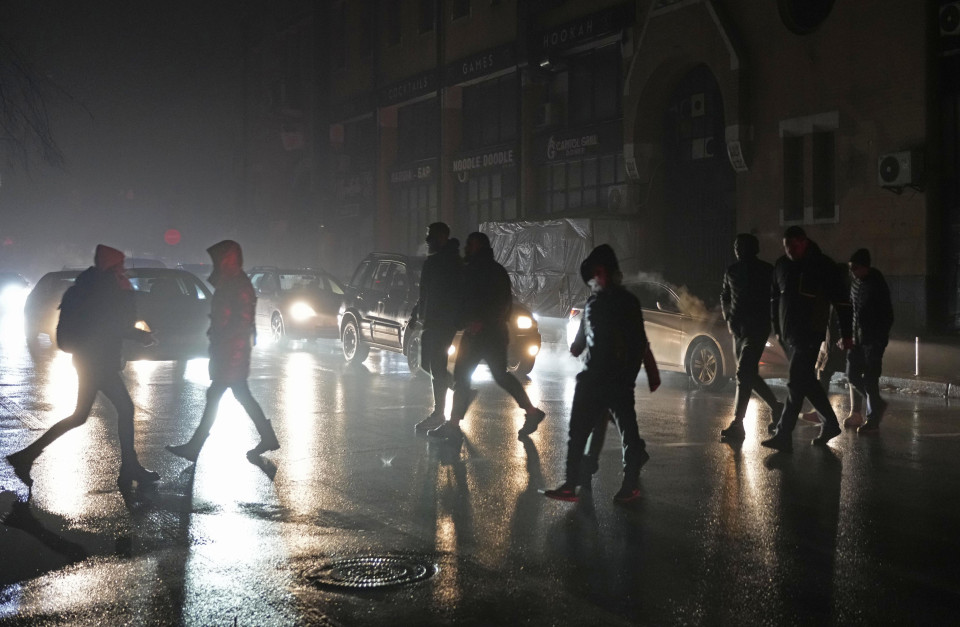 People cross a street in the dark in Kyiv on Nov. 24, 2022, after Russian air strikes caused power outages. (Kyodo) ==Kyodo

In a recent interview with Kyodo News, Yun Duk Min touched on the potential resumption of what is known as "shuttle diplomacy," in which the leaders regularly visit each other's country, a practice that has been stalled since 2011.

TOKYO - Japan is considering using an enemy base strike capability, or what it prefers to call "counterstrike capability," with its ally the United States, in the event it comes under attack, a source familiar with the matter said Friday.

Highlighting the need to obtain the capability in response to a worsening security environment, the government will also limit the targets of such attacks to "military" ones, but it may be loosely defined to include not only enemy bases but also other sites, such as command centers, the source said.

WASHINGTON - The U.S. government said Friday it was banning the sale of new telecommunications equipment made by Chinese companies Huawei Technologies Co. and ZTE Corp. as well as video surveillance equipment from some other firms, citing national security risks.

The latest move by the Federal Communications Commission reflects U.S. concerns that equipment produced by Chinese companies with potential ties to the Communist-led government may be used for espionage and other activities.

TOKYO - Japan's trade watchdog is likely to impose a record amount of fines on several major utilities after finding they formed a cartel and obstructed the liberalization of the country's electricity market, sources close to the matter have said.

TAIPEI - Taiwanese began voting Saturday in local elections, with the results seen as a prelude to the 2024 presidential and legislative polls, while voters are also casting ballots in a referendum.

About 19 million voters will elect more than 11,000 local officials. In all, nine categories of elected office, ranging from mayors of six special municipal districts and smaller cities to county magistrates, are up for grabs in what is commonly known as the "nine-in-one" elections.

BEIJING - Residents in various areas of China have protested against the nation's strict "zero-COVID" policy, according to videos shared on social media, as Beijing on Saturday reported a record number of infections for the third consecutive day.

The videos believed to have been taken in Urumqi, the capital of the far-western Xinjiang region, the southwestern city of Chongqing and Beijing went viral, with many comments sympathizing with the demonstrators posted. Some of the comments were later deleted.

TOKYO - The University of Tokyo has said it aims to double its number of female professors and associate professors to around 400 by fiscal 2027 as it pushes for more diversity on campus.

Japan's leading university announced an action plan in fall 2021 in which it seeks to raise its ratio of female faculty members, including lecturers and assistant professors, from the current 16 percent to 25 percent or more.

Compatriot Mana Kawabe is third on 67.03, and Rika Kihira sixth with 64.07. Belgium's Loena Hendrickx, the silver medalist at last season's world championships, won the short program with a 74.88.