Japan manager Hajime Moriyasu and his coaching staff flew out of the country Monday in preparation for the Nov. 20 to Dec. 18 World Cup in Qatar, where they have set their sights on the Samurai Blue's best-ever result at the tournament.

Speaking to the press at Narita airport near Tokyo, Moriyasu was upbeat about achieving the lofty target of a quarterfinal berth after advancing from a difficult Group E containing past champions Germany and Spain, as well as Costa Rica.

"I want to return to Japan at the latest date possible," the 54-year-old Moriyasu said. 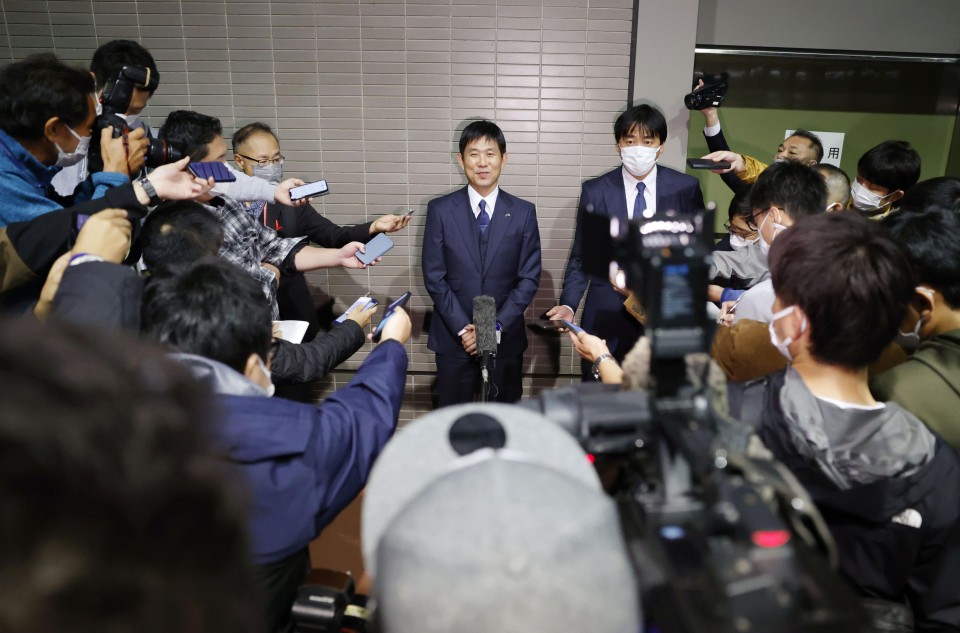 Japan national soccer team manager Hajime Moriyasu (C) speaks to the media at Narita airport on Nov. 7, 2022, before departing for Doha to prepare for the upcoming World Cup. (Kyodo)

Asked about replacing Huddersfield defender Yuta Nakayama, who has been ruled out of the tournament with an injured Achilles tendon, Moriyasu said he was "not only thinking about picking a defender" as his replacement in the 26-man squad.

The manager also expressed optimism about having star defender Takehiro Tomiyasu back in time after he left a recent Europa League game for Arsenal with a thigh injury.

"I hear it's possible for him to return before the start of the tournament," Moriyasu said.

Squad members playing for J-League teams will fly out on Wednesday, while those based abroad will head into camp after European leagues wrap up their final games before the tournament on Sunday.

The Samurai Blue, who have never gone past the round of 16, will be taking part in their seventh consecutive World Cup. They kick off their Group E campaign against Germany at Doha's Khalifa International Stadium on Nov. 23.