The Sendai High Court ruled Tuesday that the disparity of up to 3.03-fold in July's upper house election was unconstitutional but stopped short of nullifying the poll results in five northeastern Japan constituencies as sought by plaintiffs.

The ruling is the eighth to be handed down among 16 lawsuits filed across the country at 14 high courts and their branches by groups of lawyers, claiming the vote weight disparity in the House of Councillors race violated the Constitution's requirement for fair elections.

It is the first time that a court ruled the vote disparity in an upper house election unconstitutional since the country merged two pairs of less-populated prefectures into two constituencies to reduce the gap in the value of votes in 2015. 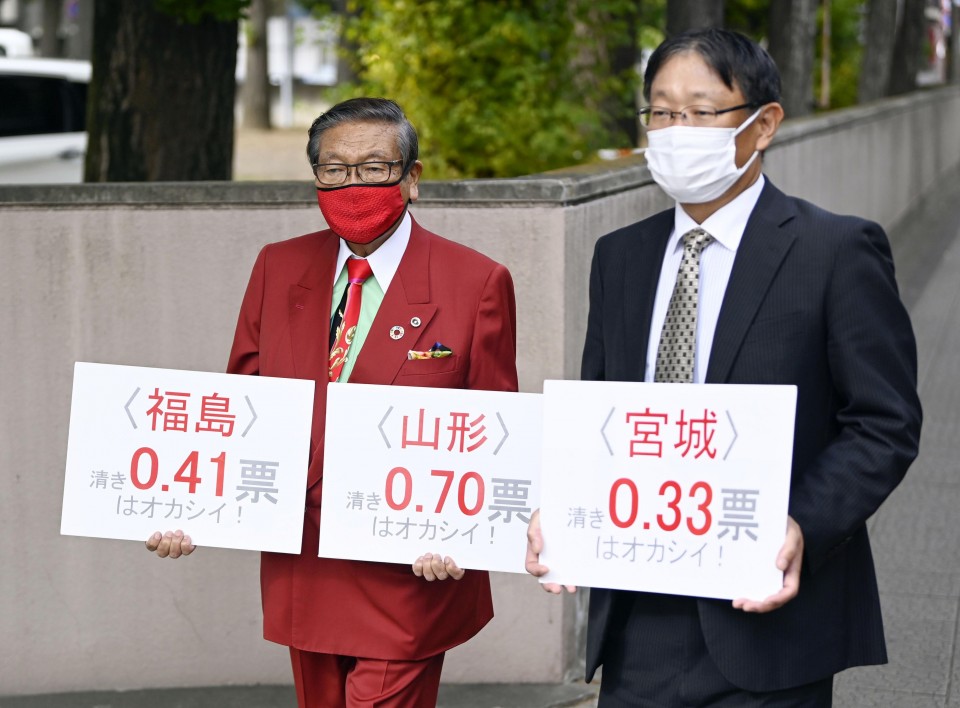 Lawyers head to the Sendai High Court on Nov. 1, 2022, to hear a ruling on a disparity in the weight of votes in the July upper house election. (Kyodo)

The electoral commission, which is expected to appeal, had sought to dismiss the suits, arguing that "the vote disparity was not significant enough to cause issues with unconstitutionality."

Miyagi Prefecture is one of three electoral constituencies in the latest House of Councillors contest known to have had a vote disparity of more than threefold, according to a national census conducted in 2020. Presiding Judge Hisaki Kobayashi said the results, released in November 2021, showed "a considerably unequal situation for vote values."

Regarding the court's decision to forgo nullifying the vote, Kobayashi said that even if it had made such a ruling, "it would not mean that the unconstitutional situation would be immediately resolved."

While the government moved to minimize widening voter disparities by merging prefectural constituencies in 2015 and creating six more upper house seats in 2018 legal revisions, efforts to keep voter disparity below twofold -- a level above which the Supreme Court has found problematic -- have since stalled.

Vote weight disparity arises as the number of voters per parliament member differs by constituency. If the disparity is significant, the election is deemed to be in a "state of unconstitutionality" and will be ruled unconstitutional if the Diet does not address the issue within a reasonable period.

Poll results may also be nullified if it is found that rerunning the election would not significantly harm the public interest.

So far, high courts in Sapporo, Tokyo, Osaka and Hiroshima have judged that the disparity was in a "state of unconstitutionality." Meanwhile, the Nagoya High Court, the Matsue branch of the Hiroshima High Court and the Takamatsu High Court ruled it constitutional.

The last of the series of rulings will be concluded by the end of November, after which the Supreme Court will hand down its decision on the matter.

After the ruling at the Sendai court, Chief Cabinet Secretary Hirokazu Matsuno said the government would "keep a close eye on the coming rulings from each court." He also made reference to the fact that the plaintiffs' calls to nullify the result had been "rejected."

A senior official in the ruling Liberal Democratic Party said that cross-party efforts to reform the House of Councillors election "have not made progress."

He added that the court noticed the failure to work on the issue, expressing the view that the next election "won't be able to go ahead if things stay the way they are now."

House of Councillors' lawmakers are elected to six-year terms, and around half of the 248-member chamber is up for election every three years, with the next contest expected in the summer of 2025.

While the top court has never nullified a House of Councillors election result nor labeled one unconstitutional as such, it did rule the respective 5-fold and 4.77-fold disparities in the 2010 and 2013 contests as in a state of unconstitutionality and decided the 2016 and 2019 races were constitutional.

In the most recent House of Councillors election held on July 10, Kanagawa Prefecture had the largest number of voters per seat in the election, while Fukui Prefecture had the least, leading to a 3.03-fold vote disparity. The vote weight gap was larger than the 3.00 disparity in the previous upper house election in 2019.