Kim vowed that "if the enemies continue to pose threats...our party and government will resolutely react to nukes with nuclear weapons and to total confrontation with all-out confrontation," the Korean Central News Agency said, a day after the ICBM-class missile that was test-fired fell in the Sea of Japan.

KCNA reported that the launch was part of the "top-priority defense-building strategy" of the ruling Workers' Party of Korea and the government to bolster "the most powerful and absolute nuclear deterrence." 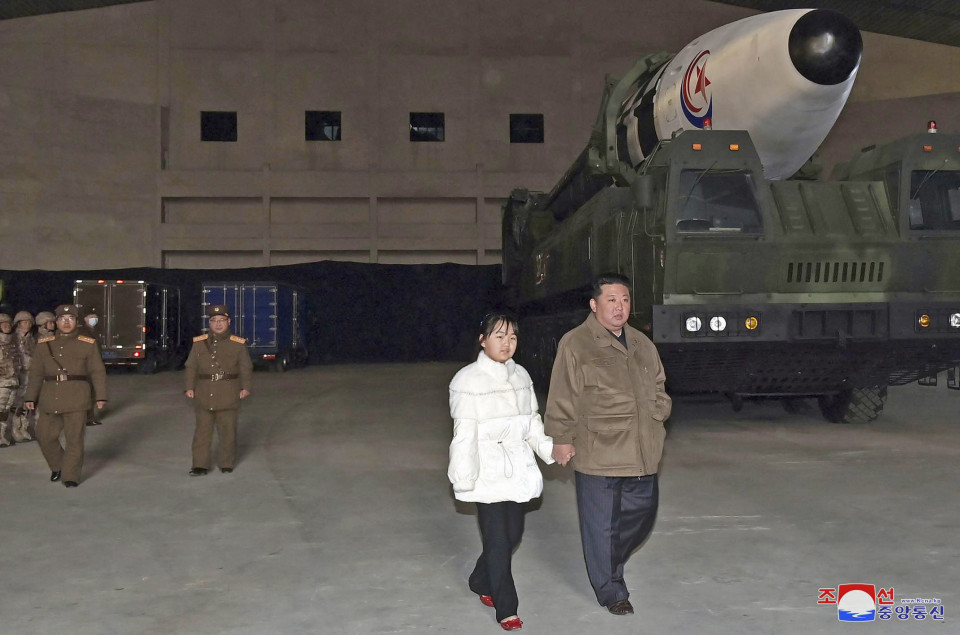 The missile flew for 1 hour and 9 minutes, and traveled 999.2 kilometers at a maximum altitude of 6,040.9 km, the report said, adding the "successful" launch at Pyongyang International Airport was aimed at checking reliability and combat performance.

Kim stressed the need to demonstrate North Korea's "strongest will to retaliate" against the war drills of its enemies and "make the U.S., South Korea and other vassal forces be aware that the military counteractions against the DPRK lead to their self-destruction."

Kim said the latest test confirmed that North Korea had secured "another reliable and maximum capacity to contain any nuclear threat," according to the report.

Kim was quoted by KCNA as saying the military threat posed by the United States and other hostile forces has prompted North Korea to "substantially accelerate the bolstering of its overwhelming nuclear deterrence."

North Korea said it had launched a new "Hwasong-17" ICBM in late March.

Kim and his daughter were at the launch on Friday with a photo showing him holding her hand in front of a ballistic missile, the first time she has been seen in public.

Following the latest missile test, Japan and South Korea held separate air drills with the United States to demonstrate their readiness to respond to any threats or provocations from North Korea.

South Korea and the United States continued their joint drill on Saturday, this time involving B-1B strategic bombers of the U.S. Air Force. The bombers flew over the Korean Peninsula, flanked by the South Korean air force's F-35A fighters and U.S. F-16 fighter jets, according to the South Korean military.

The bombers also conducted a joint drill with F-2 fighter jets of Japan's Air Self-Defense Force northwest of the Japanese island of Kyushu on Saturday, according to the Japanese Defense Ministry.

Friday's test-firing, the latest in a flurry of missile tests since the start of this year, was immediately condemned by Japan, the United States, South Korea and other countries.

The Japanese government said Friday the missile flew on a lofted trajectory and likely fell in the country's exclusive economic zone.

Japanese Defense Minister Yasukazu Hamada has said the missile could potentially travel over 15,000 km and reach the U.S. mainland if launched on a normal trajectory.