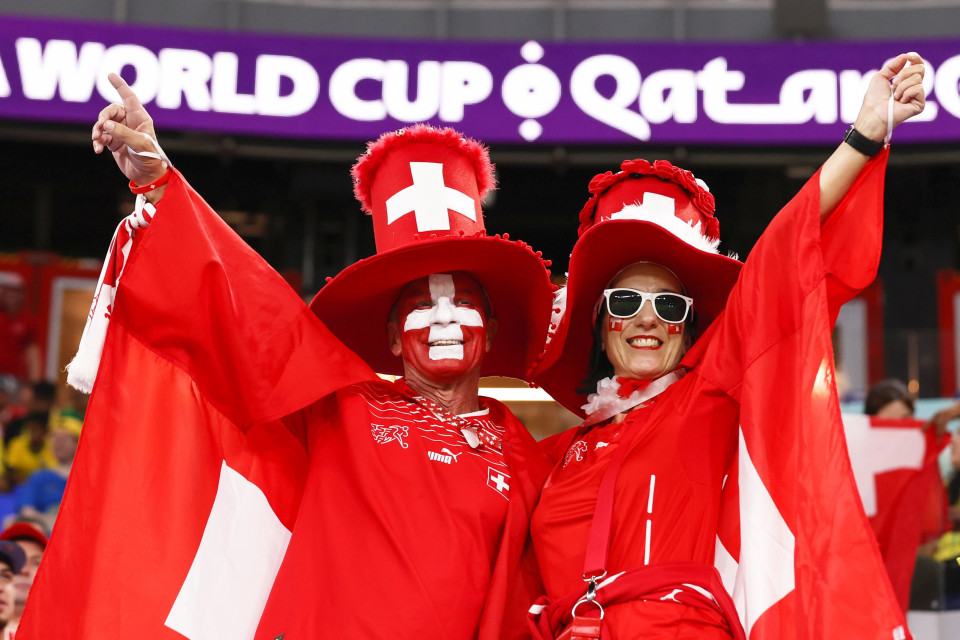 Switzerland supporters cheer in the stands ahead of a World Cup Group G football match against Brazil at Stadium 974 in Doha, Qatar, on Nov. 28, 2022. (Kyodo) ==Kyodo

The criminal investigation into ADK Marketing Solutions Inc. and Dentsu Live Inc. came after prosecutors searched six other firms, including Japan's biggest advertising agency Dentsu and Hakuhodo Inc., the second largest, on Friday and Monday over the bidding for contracts awarded to nine companies.

TOKYO - An advisory panel on Japan's fiscal policy urged the government on Tuesday to find ways of securing stable funding sources to achieve a planned increase in defense spending while avoiding putting off necessary cost-sharing measures into the future.

The Fiscal System Council, whose members include professors and corporate executives, said that an unprecedented review of fiscal steps in terms of both spending and revenue policy is required if the government seeks to boost defense expenditure in what would be a fundamental shift in approach that the panel describes as a "historic turning point."

TOKYO - Japan's lower house on Tuesday approved a 28.92 trillion yen ($208 billion) extra budget for the current fiscal year to fund an economic package aimed at softening the negative impact of accelerating inflation and rejuvenate the economy hit by COVID-19.

The government of Prime Minister Fumio Kishida hopes to enact the second supplementary budget for fiscal 2022 by the end of the current parliamentary session until early December. The draft plan will be deliberated in the House of Councillors following its passage through the powerful House of Representatives.

OSAKA - Three death-row inmates in Osaka filed a suit against the state on Tuesday, seeking an end to the practice of execution by hanging, claiming the method was inhumane under international conventions.

All three plaintiffs have been detained at Osaka Detention House for over 10 years, of which two have additionally been in the process of appealing their sentences.

Six of the eight automakers, or all but Nissan Motor Co. and Mitsubishi Motors Corp., reported increases in output, although it remains unclear whether they can sustain the uptrend amid a continued shortage of semiconductors and China's COVID-19 lockdowns.

TOKYO - A defense hotline between Japan and China is likely to start operating around next spring, Foreign Minister Yoshimasa Hayashi said Tuesday, as the two Asian powers have been at odds over the sovereignty of islands in the East China Sea.

China to launch spaceship with astronauts to complete space station

JIUQUAN, China - China will launch a spaceship Tuesday night carrying three astronauts on a mission to complete the nation's first space station and begin its operations, with President Xi Jinping pledging to make the Asian country a space power.

A rocket carrying the Shenzhou-15 spaceship is scheduled to lift off from the Jiuquan Satellite Launch Center in China's northwest province of Gansu at 11:08 p.m., according to the China Manned Space Agency.