Japan's Prime Minister Fumio Kishida was forced Friday to sack Yasuhiro Hanashi as justice minister, who came under fire for a gaffe he made over his ministerial position, in an obvious bid to minimize damage to his already fragile government.

With approval ratings for the Cabinet plunging recently due largely to suspicious ties between his ruling Liberal Democratic Party and the dubious Unification Church, Kishida was eager to sort out the latest difficulty as soon as possible, sources close to him said. 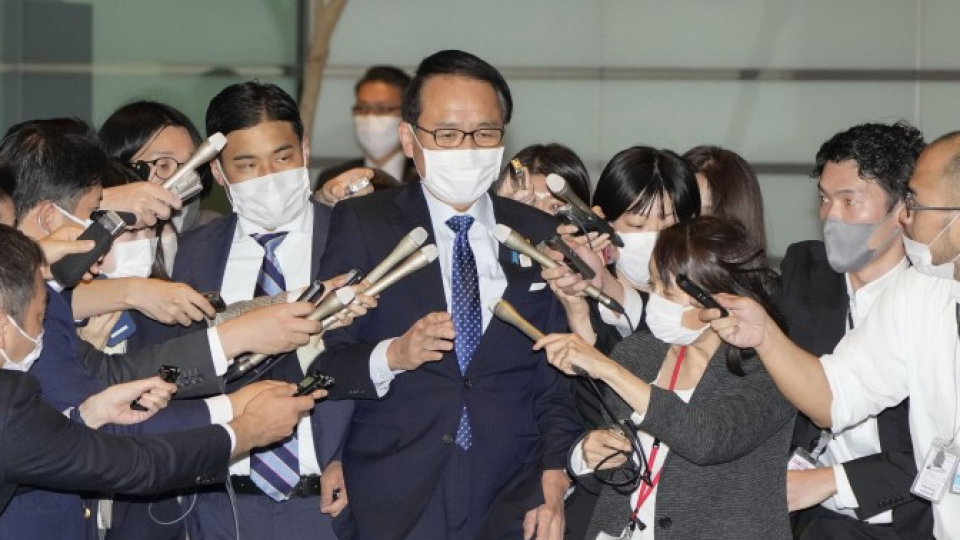 Japanese Justice Minister Yasuhiro Hanashi (C) is surrounded by reporters as he arrives at the prime minister's office in Tokyo on Nov. 11, 2022, to submit a letter of resignation after coming under fire over remarks widely seen as making light of his role in authorizing executions of death-row inmates. (Kyodo) ==Kyodo

Some LDP lawmakers, however, said Kishida's leadership has been called into question, as he was unable to swiftly replace Hanashi in fear that the move, following the resignation of another minister in late October, would take a further toll on his government.

While opposition parties are set to intensify their offensive against Kishida, calls for the premier to step down may also grow within the ruling administration itself ahead of a spate of local assembly elections next spring, the lawmakers added.

Hanashi, a lawmaker belonging to Kishida's intraparty group within the LDP, said Wednesday that the justice minister role becomes "a top story in daytime news programs only when stamping a seal on documents of execution," calling it a "low-key" post.

The remarks, lambasted by both ruling and opposition blocs as frivolous, came while Kishida has been attempting to maintain public support for his government by undertaking economic measures to ease the negative impact of rising prices and stagnant wage growth. 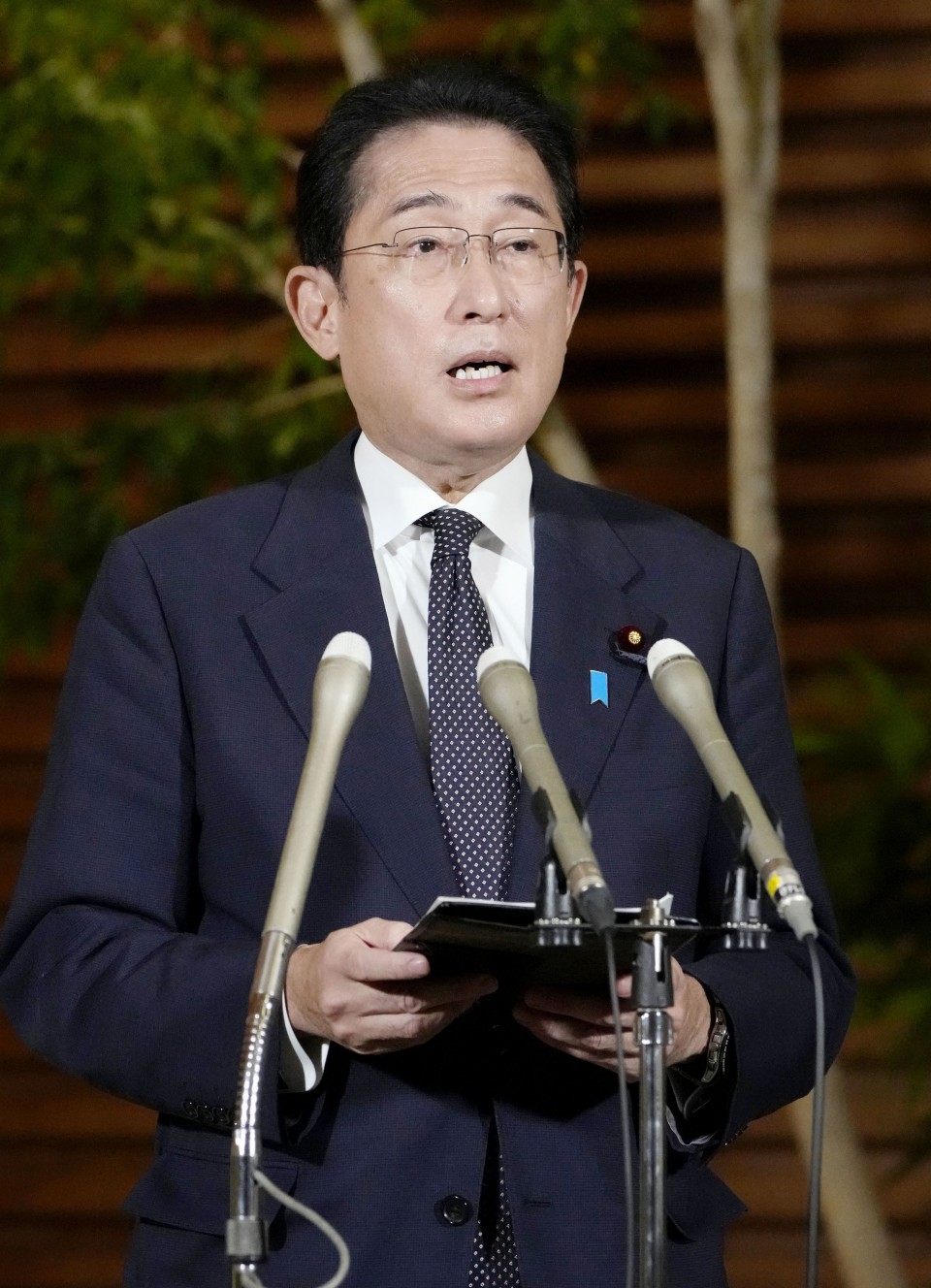 Japanese Prime Minister Fumio Kishida speaks to reporters at the premier's office in Tokyo on Nov. 11, 2022, as he dismissed Yasuhiro Hanashi as justice minister after criticism over remarks widely seen as making light of his role in authorizing executions of death-row inmates. (Kyodo) ==Kyodo

Kishida also hoped that the issue would be resolved before he leaves Japan for around one week to attend international gatherings in Southeast Asia, the sources said, as he has been keen to remedy his unpopularity with significant diplomatic achievements.

On Thursday night, the prime minister suggested that he had no intention to dismiss Hanashi, but Kishida was eventually compelled to bow to the opposition's calls to fire the minister so that he can pursue his policies, according to the sources.

Kishida's administration has been shaken. Late last month, he was also pressed to replace Daishiro Yamagiwa as economic minister for his close links to the Unification Church, while internal affairs minister Minoru Terada has been grilled over political funds-related scandals.

Land minister Tetsuo Saito, a lawmaker of the LDP's junior coalition partner Komeito, said Hanashi has no "resolve" to serve as justice minister.

Kenta Izumi, leader of the main opposition Constitutional Democratic Party of Japan, criticized Kishida, saying the prime minister, who has touted his own "ability to listen" to various opinions, is "slow to make decisions."

Kishida has "shown a significant lack of decisiveness" as premier, Izumi said.

Akira Koike, head of the secretariat of the opposition Japanese Communist Party, also said Kishida should have fired Hanashi much earlier, adding that he tried to escape responsibility for having tapped the lawmaker as justice minister.

"I have to say Kishida does not have the qualifications to be prime minister," Koike said.

Mikitaka Masuyama, a professor of political science at the National Graduate Institute for Policy Studies, said Kishida had defended Hanashi at first as he had "wanted to avoid one resignation setting off a domino effect of further resignations," but he was finally driven to replace the minister.

In recent months, support ratings for Kishida's Cabinet, launched in October 2021, has been nearing what is widely seen as the "danger level" of 30 percent, although the LDP scored a major victory in the July 10 House of Councillors election.

The triumph appeared at first to promise Kishida a firm position in government for what has been dubbed his "golden three years" free from national elections unless he were to dissolve the House of Representatives, but such a rosy future is unlikely, ruling politicians said.

An LDP lawmaker told Kyodo News that if the party's members begin to believe that they cannot win local assembly elections in April under a lame-duck Kishida, they would try to remove him as prime minister.

Natsuo Yamaguchi, head of Komeito, which has been making efforts to secure as many seats as possible in the local elections across the country, requested Kishida to "rebuild the Cabinet" to "meet the expectations of the public."

"Without the trust of the public, it is impossible to run the government," Yamaguchi added.