Japan's security cooperation with the United States and South Korea may become stronger than ever as their leaders over the weekend laid the groundwork for a much greater recognition of threats beyond those posed by North Korea.

"It is groundbreaking that the three nations agreed on such a comprehensive security cooperation," said Tsuneo Watanabe, a senior research fellow at the Tokyo-based Sasakawa Peace Foundation in Tokyo. 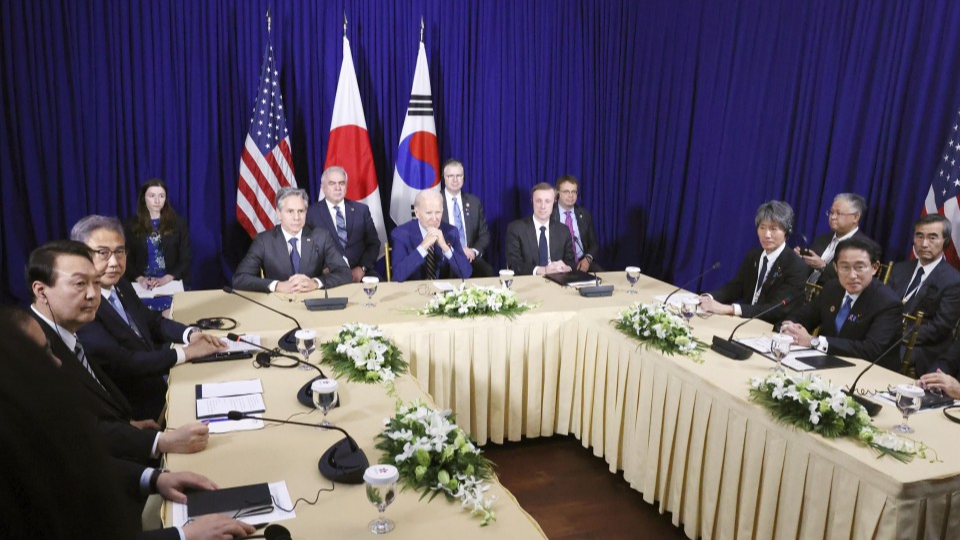 Japanese Prime Minister Fumio Kishida and his U.S. and South Korean counterparts, Joe Biden and Yoon Suk Yeol, released a joint statement on "trilateral partnership for the Indo-Pacific" on Sunday following a meeting in Phnom Penh, held on the sidelines of summits related to the Association of Southeast Asian Nations.

Aside from North Korea, which has been test-firing ballistic missiles at an unprecedented pace this year, the statement cited the situation over Taiwan, Russia's invasion of Ukraine and enhancing economic security as major challenges for Tokyo, Washington and Seoul.

When Biden met the Japanese and South Korean leaders, he said, "This partnership is even more important than it's ever been" on the back of those new challenges.

Watanabe, an expert on Japanese and U.S. diplomatic affairs, said the new document carries enormous significance for the trilateral framework, especially for South Korea, noting that its security arrangements with other countries, even with the United States, had been centering on North Korea until now.

He said the reason behind the expanding scope seems to mirror the efforts by the United States and its two key allies to secure peace and stability for the whole of East Asia by establishing a stronger Washington-led security structure as China's might grows, in addition to preventing a "military outburst" from North Korea.

Narushige Michishita, a professor at the National Graduate Institute for Policy Studies in Tokyo, said the issues of North Korea and Taiwan are "strategically linked," and they should be highlighted more by political leaders when they talk about threats posed by Pyongyang's missile and nuclear programs.

"Risk of war is rising not only on the Korean Peninsula but also in the Taiwan Strait now, which means that the Japan-U.S. alliance has to take care of the two situations, and that would be a tougher task for them," he said.

Tensions remain high over Taiwan, a self-ruled democratic island that China regards as a breakaway province to be reunified with the mainland, by force if necessary.

Chinese President Xi Jinping, who started a historic third five-year term last month as general secretary of the Communist Party, may take a more hawkish stance on Taiwan as he further consolidates his power.

The three-way summit, organized twice within just five months, came as North Korea is believed to have made preparations for its seventh nuclear test, the first since September 2017. It was also the second such occasion for Yoon, who has pursued to boost ties with Japan and the United States since taking office in May.

Under the administration of left-leaning Moon Jae In, Yoon's predecessor, there were no summits of the three countries after September 2017, when Pyongyang last conducted a nuclear test.

Michishita, well-versed in security issues of the Korean Peninsula, said it is easier for Japan and South Korea to deepen cooperation with the United States than they do bilaterally, given that making political efforts to improve Tokyo-Seoul ties, which are still often swayed by wartime issues, can be "blamed domestically."

Japan and South Korea had been at odds over the issue of damages to Korean plaintiffs over wartime labor, which South Korean courts have ordered two Japanese firms to pay, along with other disputes such as the Seoul-controlled, Tokyo-claimed islets of Takeshima in the Sea of Japan, which are known to South Korea as Dokdo.

The relationship between Tokyo and Seoul, which once sank to the lowest point in decades during the Moon period, has been slowly improving since the inauguration of Yoon.

Also in the Cambodian capital on Sunday, Kishida and Yoon met one-on-one, marking the first official summit for the two countries since December 2019, and vowed to make efforts toward an "early resolution" of wartime labor issues.

Michishita, however, cautioned that hastily seeking settlements for the pending delicate problems could be risky for Kishida and Yoon, who are both struggling with low approval ratings, and further losing domestic support would hinder the development of the trilateral cooperation.

"Of course, it is important for them to hold meetings and send messages that the two countries' relationship is on the track of moving into a better direction," but they should mend soured ties "in an even-tempered manner that is not that hasty."

The Sasakawa foundation's Watanabe echoed a similar view, pointing out that public backing for mending bilateral ties remains weak, "but I think most of the Japanese and South Korean people favor beefing up ties with the United States to counter North Korea and China."