Japan should step up intelligence sharing and military exercises with the United States as part of efforts to boost deterrence and the response capabilities of the bilateral alliance against possible contingencies over Taiwan and North Korea, according to a former Biden Senate aid.

Frank Jannuzi, now president of the Maureen and Mike Mansfield Foundation in Washington, also welcomed Prime Minister Fumio Kishida's call for a "substantial increase" in Japan's defense spending and his not ruling out the introduction of counterstrike capabilities.

Jannuzi made the remarks as senior U.S. military officers have said China could attempt to take control of Taiwan by 2027, or even this year or 2023. Speculation is also growing that North Korea may carry out a seventh nuclear test. 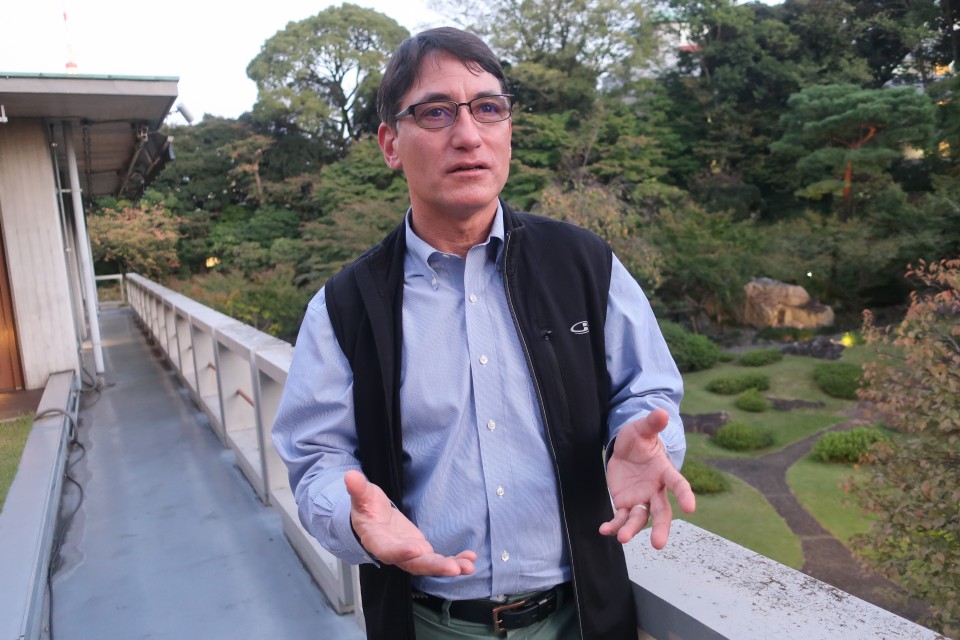 Frank Jannuzi, president of the Maureen and Mike Mansfield Foundation in Washington, speaks in an interview with Kyodo News in Tokyo on Oct. 31, 2022. (Kyodo)

The fate of Taiwan has direct links to the security of Japan. Following a trip to Taipei by U.S. House Speaker Nancy Pelosi in August, the Chinese military held massive exercises around the self-ruled democratic island including the launch of ballistic missiles, five of which fell into Japan's exclusive economic zone in the East China Sea for the first time.

Cross-strait tensions have risen further since Chinese President Xi Jinping -- speaking at a twice-a-decade Communist Party congress last month, where he cemented his position as the country's most powerful leader since Mao Zedong -- said the mainland will never renounce the right to use force to bring Taiwan, which Beijing regards as a renegade province, under its control.

China has also been attempting to undermine Japan's administration of the Senkaku Islands, which it claims and calls Diaoyu, near Taiwan.

"Japan has close economic relations with Taiwan and I think it is pretty clear that the Japanese government believes an attack on Taiwan would constitute a grave threat to Japan's national security interests," Jannuzi said in an interview during a recent visit to Tokyo.

"Therefore it would be allowed under the Constitution for Japan to join international efforts to try to defend Taiwan," said Jannuzi, who for 12 years advised the current U.S. president, Joe Biden, on East Asian and Pacific affairs when Biden was a senator on the upper chamber's Foreign Relations Committee.

"This is a message that needs to be communicated more clearly to the Chinese."

Jannuzi urged Japan to strengthen its intelligence-sharing system with the United States to the level Washington has with its Five Eyes partners so as to better assess what China, North Korea and Russia are doing in the region and reach a consensus about their strategic capabilities.

"In order for this to happen, Japan needs to do a better job on information security, cybersecurity, Earth observation and satellite capability so that it can achieve the level of integration with the U.S. intelligence community that is necessary to have a fully integrated analytic and intelligence-sharing operation," Jannuzi said.

"This is a high priority for the Biden-Kishida partnership," he said. "I've spoken to senior U.S. government officials about this challenge, and I know that Japan is working on it."

In addition to boosting capabilities such as air defense, ballistic missile defense and anti-submarine capability, Japan must demonstrate its readiness to respond to contingencies over Taiwan and North Korea by conducting more multilateral exercises with the United States, South Korea and other partners, according to Jannuzi.

Besides increased deterrence, he suggested Biden and Kishida promote diplomacy with Xi, saying the Nov. 15-16 summit of the Group of 20 major economies in Bali, Indonesia, will provide a good opportunity for interactions.

"The United States needs to have talks with China on Taiwan, North Korea, human rights and nuclear arms control, and it needs to happen directly at a senior level, and it's not happening enough," Jannuzi said. "I think it's very important that Japan also have that kind of bilateral dialogue with China."

Despite a spate of recent missile launches and signs of preparations for a test to miniaturize nuclear warheads by North Korea, Pyongyang's weapons development is low on the U.S. foreign policy list, he said.

Jannuzi added it will be difficult to halt North Korea's provocations without China taking serious economic action against its neighbor, something he calls unlikely.

"President Biden knows the best that we might negotiate would be some limitation on the North Korean nuclear program," he said, arguing the North's leader Kim Jong Un views holding on to nuclear weapons as vital for the survival of his regime, especially after seeing Russia's invasion of Ukraine.

"Mr. Biden also knows that such a limited amount of progress would require major concessions on sanctions," Jannuzi said. "Such a deal could be negotiable, but he would be condemned for lifting sanctions in exchange for only partial denuclearization."

"As a result of this, it's not a high-priority diplomatic effort because the return on the investment is too low," he said.