Japan's Ritsu Doan enters Thursday's do-or-die World Cup game against Spain with intimate knowledge of his opponents and a moment of inspiration from which to draw confidence.

Doan and nine of his teammates in Qatar played against Spain in last year's Olympic soccer semifinal. They suffered a 1-0 defeat that saw their gold medal aspirations dashed.

That familiarity apparently put Freiburg winger Doan in a confident mood ahead of the game that will determine Japan's 2022 World Cup future.

"I know the style of their game, and I can't lose twice to the same opponents," he said in an online interview Tuesday. 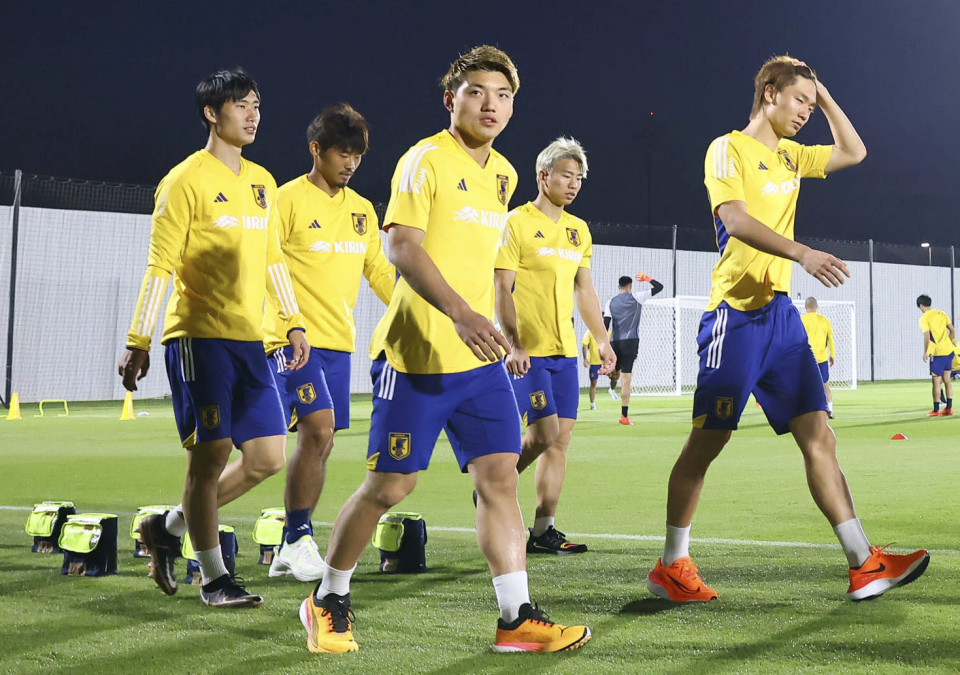 Ritsu Doan (C) and his Japan teammates are pictured during training in Doha on Nov. 28, 2022, three days before the team's World Cup group-stage match against Spain. (Kyodo)

But the Olympic heartbreak for Doan and Co. is only part of the story, with the two teams having also met in a warm-up in Kobe, Japan, just days before the Olympic tournament began.

In that game, a 1-1 draw, Doan scored a powerful left-footed strike into the top corner, giving Japan the lead. His World Cup teammate Takefusa Kubo provided the assist.

There are seven Spanish players in the team's World Cup squad who were part of the Olympic semifinal, including starting goalkeeper Unai Simon and stars Dani Olmo, Pedri and Marco Asensio.

Real Madrid winger Asensio scored the winner for Spain against Japan in the Olympic tournament and also netted in his team's 7-0 rout of Costa Rica in their first match of the World Cup. Olmo and Pedri have been among the team's standout attackers in Qatar.

The scale of the challenge facing Japan does not faze Doan, though. He said he sees it as the best possible situation "if you look at it positively."

Japan have three points in Group E and can advance to the round of 16 with a win against Spain. A draw will also be good enough if Germany and Costa Rica have the same result, though if the Central Americans win, Japan must do the same. If Germany win and Japan draw, goal difference will come into the equation.

Given the various permutations, Spain just need a win or a draw, meaning they may implement a conservative game plan.

The Samurai Blue got a boost on Tuesday in Doha when Takehiro Tomiyasu returned to the pitch with his teammates for the start of training.

The Arsenal defender has been suffering a hamstring complaint that has kept him out of training since he came on as a halftime substitute in Japan's first-up defeat to Germany.

Yuki Soma, who was industrious in Sunday's disappointing loss to Costa Rica on his World Cup debut, believes the key against Spain is in Japan holding the fort.

"We will be in trouble if (our opponents) break through in the buildup," he said.

But the Nagoya Grampus midfielder believes that if the defense holds, Japan can profit.

"If we can stifle them, we can use quick counterattacks," he said.