Much of the pre-World Cup attention focused on the challenges foreign workers face in Qatar, whether it be dangerous working conditions, poor compensation or restrictions on their liberties.

But the nation's rapid development linked to its hosting of the World Cup has provided an opportunity for the workers to earn a living and even, at times, to have fun. 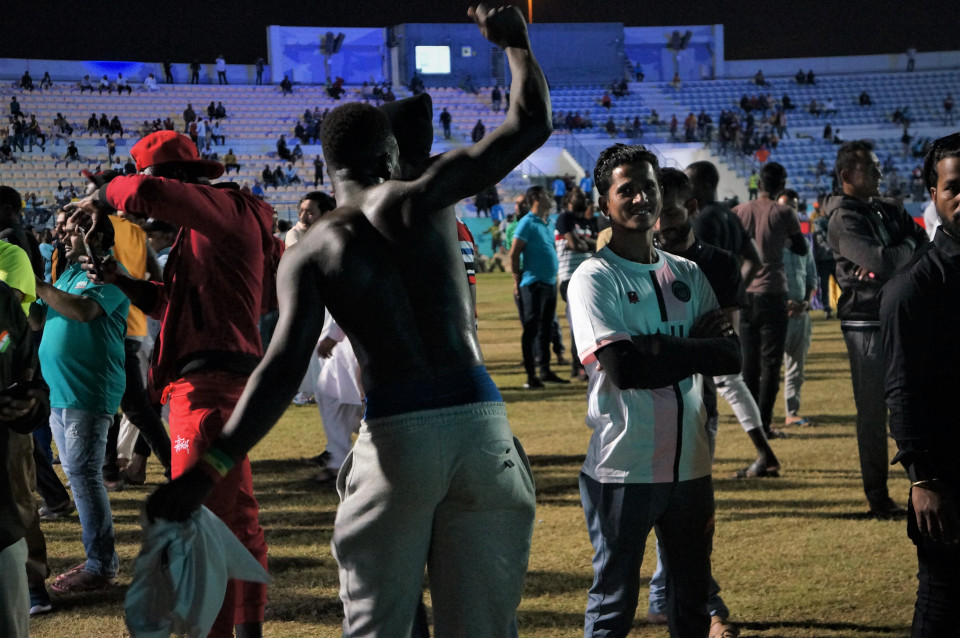 A man dances shirtless after Senegal beat Qatar in the World Cup as people look on at the New Industrial Area Festival Zone, in the Umm Al Seneem neighborhood of the Industrial Area municipality near Doha, Qatar, on Nov. 25, 2022. (Kyodo)

FIFA has been heavily scrutinized for awarding the tournament to a country with a history of using global events, whether the Asian Games, world championships or the World Cup, to self-promote, develop and sportswash.

But the World Cup has brought some distraction for the more than 2 million mostly male workers in Doha and its surrounding areas.

Ugandan painter Derek has only been in Qatar for three months but has already tasted enough of the country's omnipresent white desert dust to know it is not for him.

When Kyodo News asked how he likes it, the 23-year-old responded with silence.

"We just came here for money, the working conditions are not good," he said while among a group of friends who were enjoying an evening watching Qatar play Senegal on a big screen at a fan zone in the Industrial Area, a municipality to the south of central Doha where the vast majority of the nation's foreign labor force lives.

"The weather, it is too much for us. We are being told to work in the direct sunlight, we cannot do anything (about it)," he said, but did praise the quality of accommodation provided, saying, "they give you everything you need."

"There are no clubs, they don't drink...I am saving some little money, but when I get my salary I have to send it all back (home). There is nothing to do here." 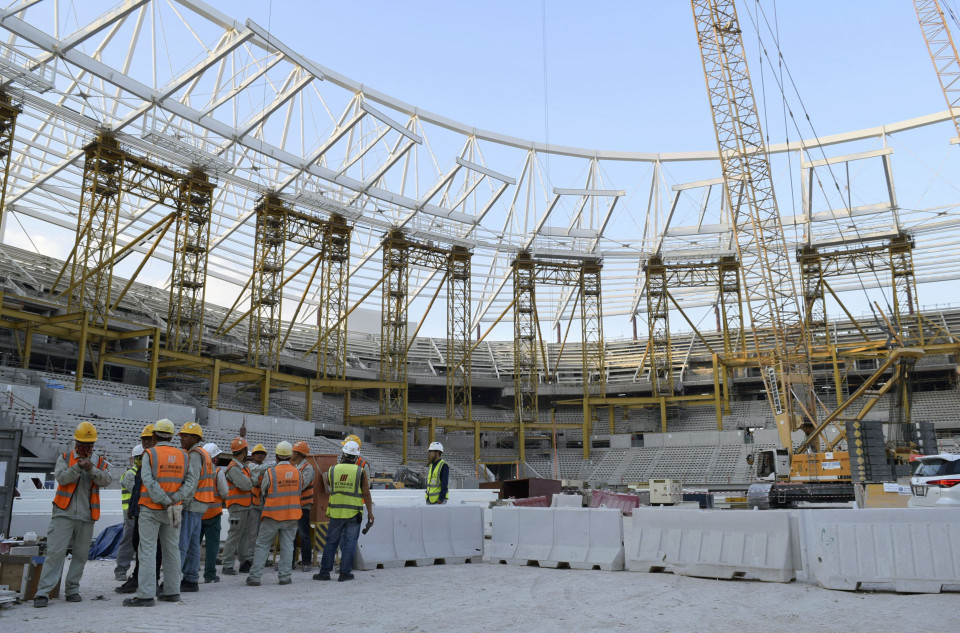 Photo taken Dec. 16, 2018, shows Al Rayyan Stadium, one of the venues for the 2022 football World Cup in Qatar, under construction. (Kyodo) ==Kyodo

Derek, who like other foreign workers interviewed, will be referred to by only their given name to protect their identity, sees no future for himself in Qatar or even the Middle East. The Ugandan capital Kampala is his home, but he has aspirations elsewhere.

"When I finish my contract here, I want to go to Europe. This is my dream. I don't know if it can happen in my life," he said, adding that having the right job experience was key to finding work in Europe when he leaves.

Even though Derek has not warmed to his temporary home, he was all-in with his support for the Qatari team as they took on Senegal, a choice his friends delighted in ribbing him for as the African nation beat the hosts 3-1.

"There is an African brotherhood, but I just like something about (Qatar's) team." 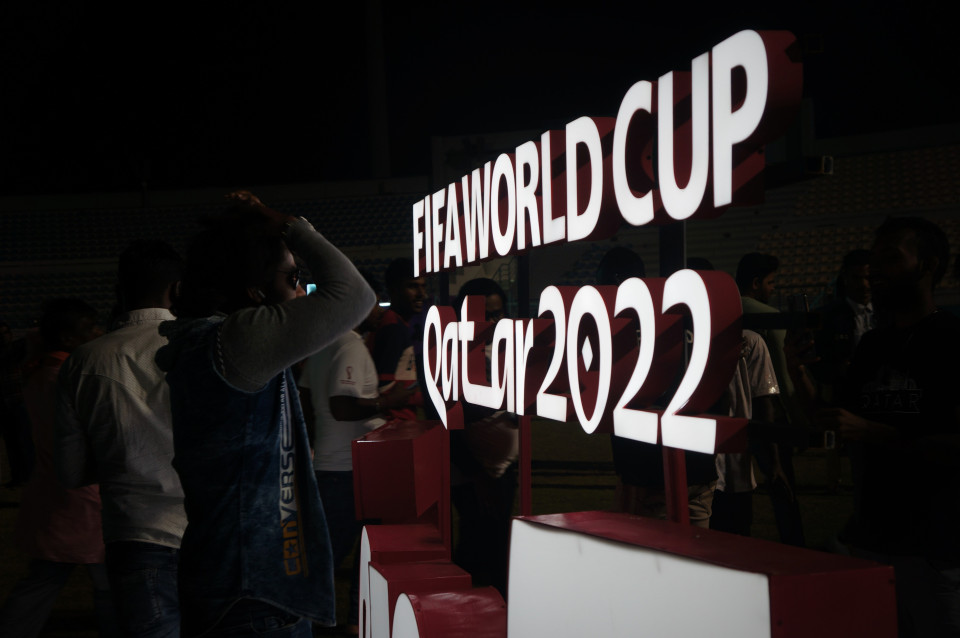 A man stands in front of a World Cup sign at the New Industrial Area Festival Zone, in the Umm Al Seneem neighborhood of the Industrial Area municipality near Doha, Qatar, on Nov. 25, 2022. (Kyodo)

When Mohammed Muntari scored what is so far Qatar's only goal of the tournament, Derek leaped and cheered before turning and pointing out the "billions of dollars that goal cost!" the Gulf State.

The New Industrial Area Festival Zone, as it is officially named, is a microcosm of the Qatari experience. The people who go there each night represent the nations that do much of the heavy lifting for the country.

African faces mingle with the overwhelming majority from the Asian subcontinent, with some Southeast Asians represented, too.

Samuel wanted to show off his bright orange shirt, which he said was from the "non-league" soccer team he represented at home in Sierra Leone.

"I wanted to be (a) professional," he said, gesturing to his left knee, "before I got an injury."

"But I love Qatar," he said, nine months into his stint.

The voice of Lincia Rosario, the emcee and host of the festival, was booming from the speakers behind him.

"Day 1, when I started off, I was a little bit overwhelmed," Rosario said when asked about being one of few women in the arena and being very much the focus as she bounced around the stage. "I must say, the security here is amazing. Everybody is very warm and I feel very protected here."

Despite having a lot of experience as an actor, television presenter and brand ambassador in India, Rosario said she has never been involved in anything like this.

"I feel one with these people here. To see people of different nationalities coming together and really applauding for Qatar and really feeling it, it just gives me goosebumps," she said after inviting two Senegalese men onto the stage to dance after their team's win.

The fan zone in the Umm Al Seneem neighborhood has two giant screens, one in a cricket arena and the other outside. There are structures built from shipping pallets that many stood under and next to for selfies.

It is not featured on the glossy brochures handed to arriving tourists but does get a brief mention on a few websites.

One of its main selling points is people entering do not require a "Hayya Card," the document required for anyone buying a ticket or going inside one of the more polished and high-profile live sites in downtown Doha. And it's free.

Dylan, a paramedic from Britain, was sitting to the side in a medical golf cart with a stretcher and various other equipment.

He was one of several medical personnel who drifted around the venue, ready to jump to action if needed.

Asked if he had been busy, he said, "Not busy, constant."

Contracted by Hamad Medical Corp., Dylan and his colleagues, many of whom are from South Africa, are stationed in the fan zone each night.

"I wanted to come and see (the World Cup) for myself. I think some people at home think I am a mercenary for coming here, but to be honest I am taking a pay cut to be here."

"The medical system here is the best of the best. Some very talented people come here to work," before stressing that he knows what he is talking about, saying, "I have been 'at sea' for a long time working on projects like this."

Dylan said his nights are quite peaceful. He has seen no violence, aggression or trouble from the thousands of people who have passed through the gates.

"It's a great atmosphere," he said.

With such a large percentage of Qatar's foreign worker population coming from India, Pakistan, Nepal and Bangladesh, soccer is not everybody's first priority. 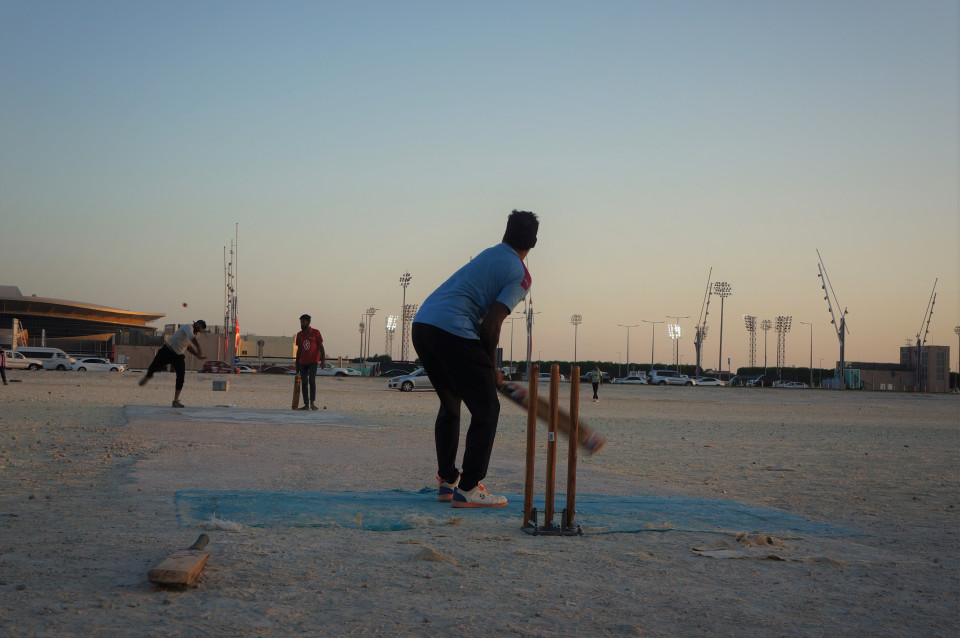 A group of friends from the Indian region of Kerala play cricket near the Japan soccer team's training ground in Doha, Qatar, on Nov. 25, 2022. (Kyodo)

Just an hour before the Qatar game kicked off, Bessam and his friends were engaged in an intense game of cricket.

Playing on a dusty, rock-strewn vacant lot near the Japan World Cup team training facility in the Al Sadd district of Doha, Bessam and his buddies, all from the Kerala region of India, said they were not planning to watch Qatar play.

"I like football, but cricket is my first love," he said before pointing to his friend who was fielding and saying, "he went to a (World Cup) game, but it is now very expensive."

Bessam has been in Qatar since 2008 and works as an interior designer. Qatar is his home now, but not forever.

"I can stay here for a long time, but at some time I have to go back to my country," he explained.

"I cannot buy a house here, only Qataris can. It is impossible (for us)."

He has three children, with his six-month-old youngest daughter born in Qatar.

"She has a (Qatari) ID card. They are not providing residency. She can live here until she is 16," he said before going to bat, only to be caught after sending a ball sky high.

Uber driver Mohammed, who has lived in Qatar for 11 years in total, but only returned recently from Sri Lanka due to the financial crisis there, said, "I don't like (it here), what to do? I can earn good money."

He briefly summed up the situation many like him face.

"Qatar is very good, everything is good...But this is not my country." 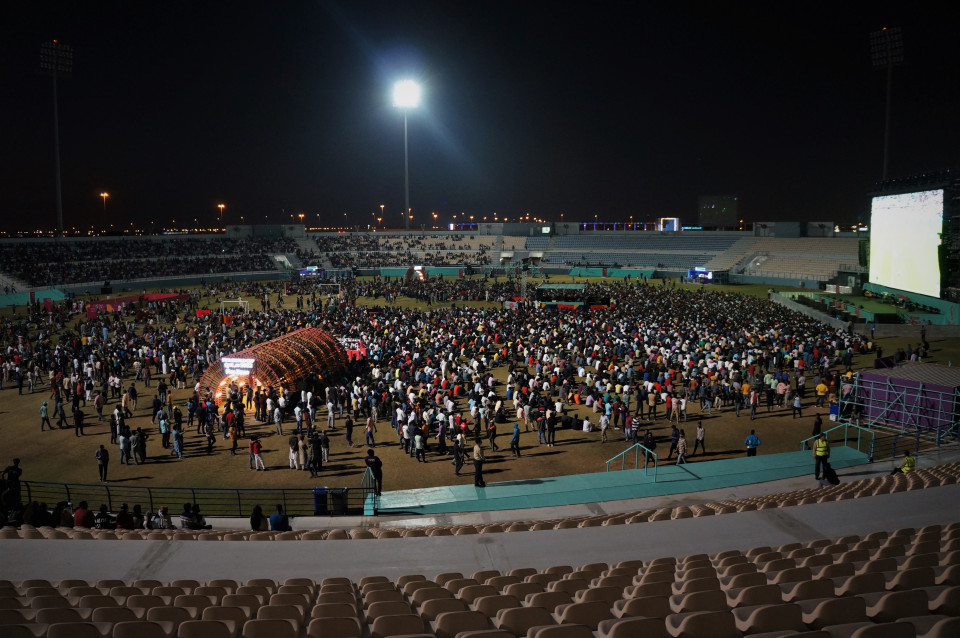