Residents of Japan witnessed Tuesday night a rare celestial event not seen in 442 years, a total lunar eclipse coinciding with a lunar occultation of Uranus, in which the planet is eclipsed by the moon.

The astronomical phenomenon quickly began trending on Twitter in Japan, as relatively clear skies in Tokyo allowed many users to take photos of the "blood moon," the state at which a total eclipse gives the moon a reddish appearance.

Around 50 people, including local sixth grader Ayane Koyanagi, participated in an eclipse viewing event held at an observatory in Sakai, Osaka Prefecture.

"This is the first lunar eclipse I have seen in my life. I felt moved when the moon began to turn red," the 12-year-old said.

A total lunar eclipse occurs when the Earth comes between the sun and the moon, blocking the sun's rays from directly reaching the natural satellite. 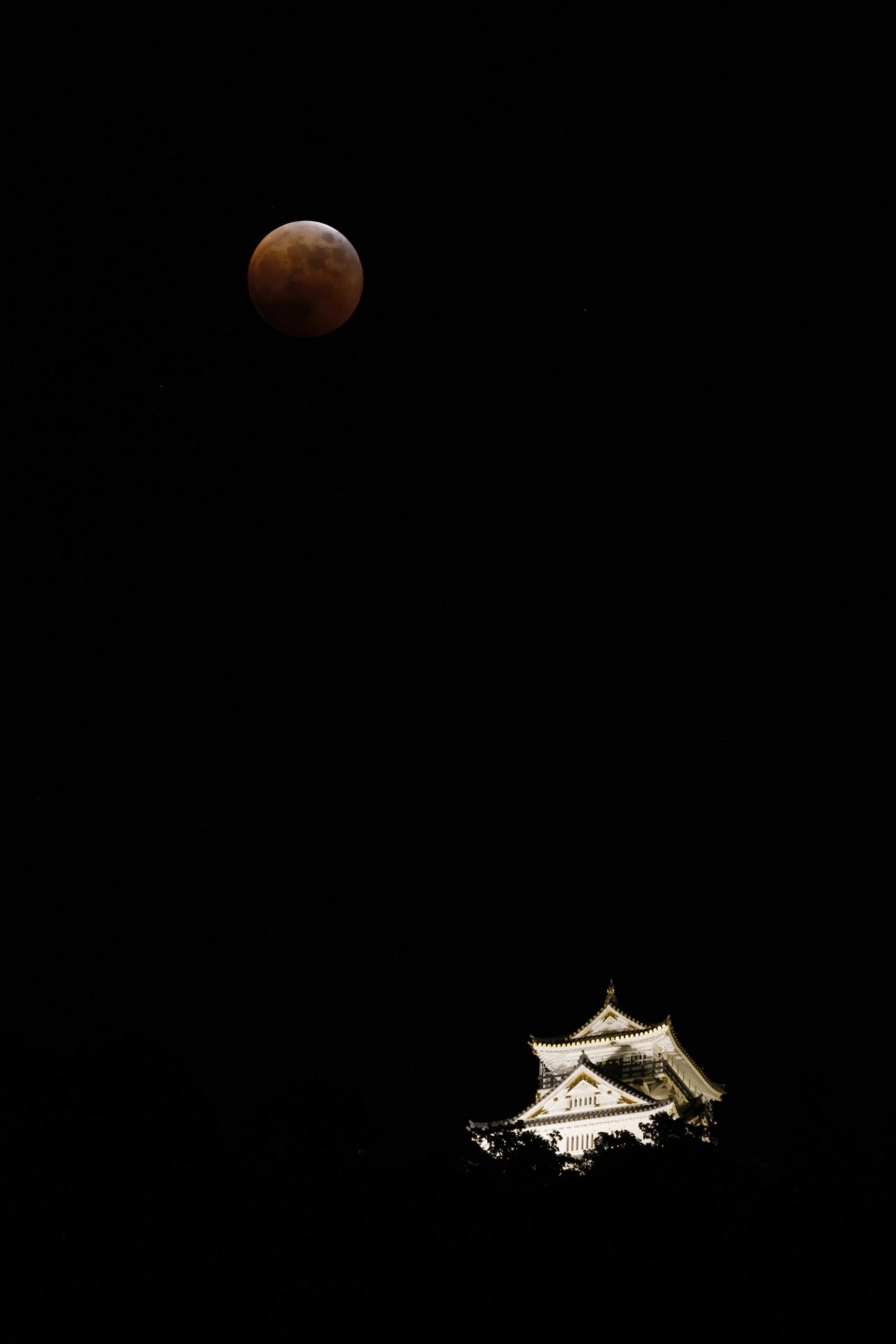 A total lunar eclipse is observed over Gifu Castle in Gifu, central Japan on Nov. 8, 2022. (Kyodo)

As the Earth's atmosphere acts like a lens, the moon will not be blacked out but appear in different shades ranging from bright orange to a darkish tint, depending on conditions such as atmospheric dust.

The occultation of Uranus varied by region but was visible in Tokyo for around 40 minutes from 8:40 p.m.

While occultations are not rare, the occultation of a planet by the eclipsed moon can only occur when the sun, Earth, moon and the planet are almost on the same straight line. 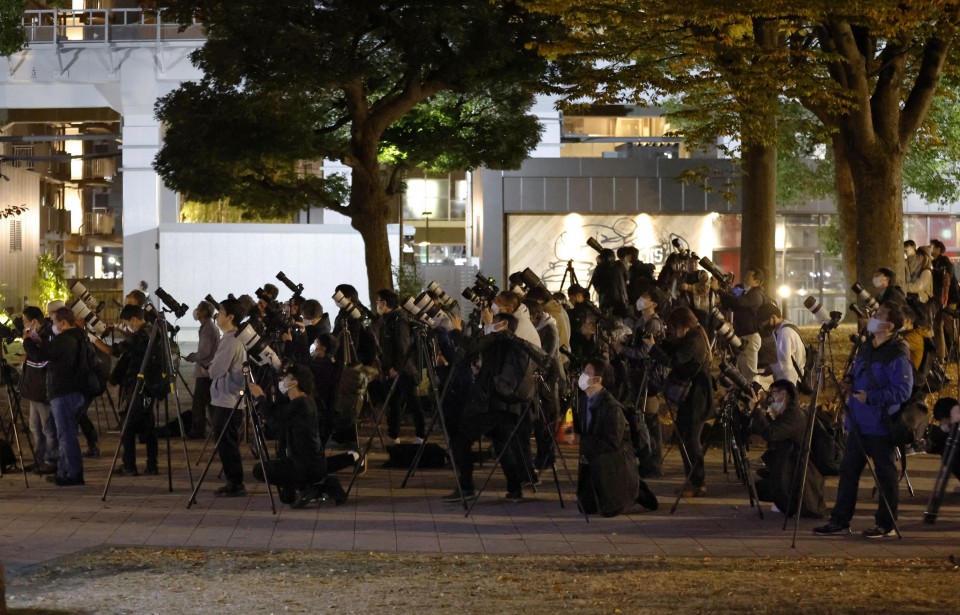 People gather in Tokyo to photograph a total lunar eclipse on Nov. 8, 2022. (Kyodo)

According to the National Astronomical Observatory of Japan, the last time a total lunar eclipse and planetary eclipse coincided was in July 1580, when the moon covered Saturn.

The next time a planet will be occulted by an eclipsed moon will be 322 years from now, in July 2344, involving Saturn, the observatory said. 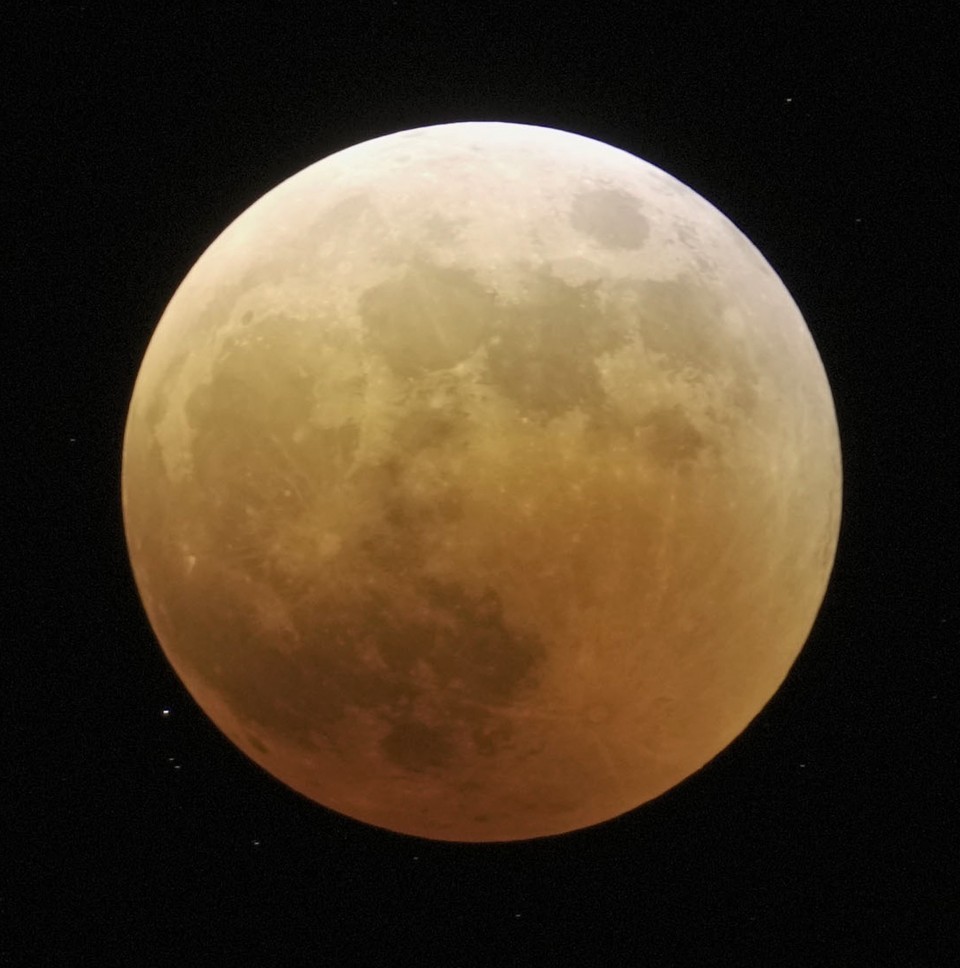 A total lunar eclipse seen in Mine, Yamaguchi Prefecture in western Japan on Nov. 8, 2022. (Kyodo)