Residents in various areas of China have protested against the nation's strict "zero-COVID" policy, according to videos shared on social media, as the country on Saturday reported a record number of infections for the third consecutive day.

The videos, believed to have been taken in Urumqi, the capital of the far-western Xinjiang region, the southwestern city of Chongqing and Beijing, went viral, with many social media users expressing sympathy with the demonstrators. Some of the videos were later deleted. 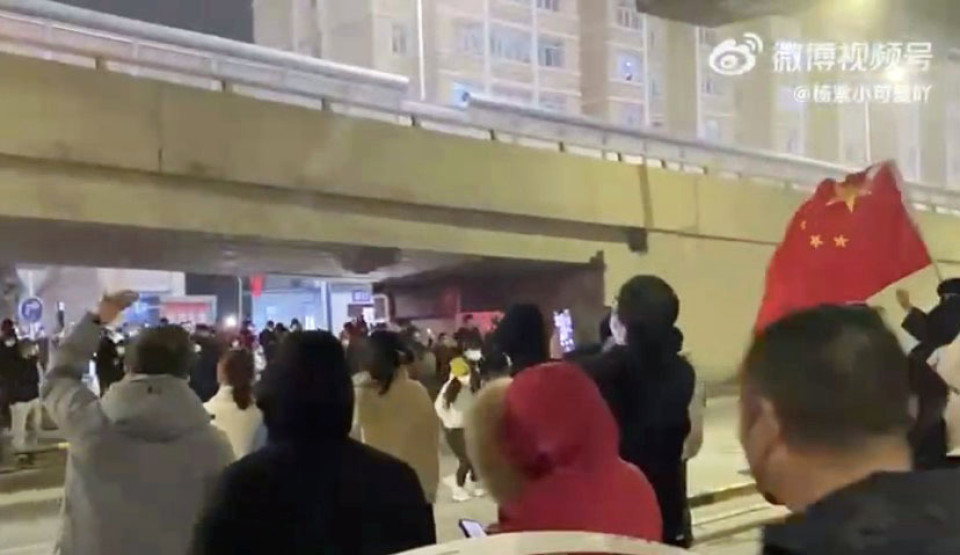 Screenshot from a video posted on Weibo shows people shouting "Lift the lockdown" on a street believed to be in Urumqi in China's Xinjiang region. (Kyodo)

As the leadership of President Xi Jinping sticks with the stringent measures involving lockdowns of areas where outbreaks occur, people banned from leaving their homes often find it difficult to procure adequate food and daily necessities.

As of Friday, China had logged daily coronavirus cases of over 34,000 in the mainland, according to the National Health Commission, with the figure hitting a new high since it began releasing data in the spring of 2020.

In a video believed to have been taken in Urumqi, many people took to the streets and shouted, "Lift the lockdown."

Public frustration with the radical anti-virus steps had been growing in the city, where a fire in a high-rise apartment building killed 10 people on Thursday, fueling speculation that evacuation and rescue efforts may have been delayed due to strict COVID restrictions.

In what is believed to be Chongqing, a man exclaimed that the draconian restrictions had inconvenienced him. Authorities attempted to escort him away but were stopped by nearby residents, according to a video posted on social media.

In Beijing, with a population of about 22 million, more than 2,100 areas had come under lockdowns as of Saturday afternoon, with many downtown shops closed. The capital saw record daily infections of over 2,500 on Friday.

In eastern Beijing, residents objected to a lockdown on Friday, saying it would be stricter than existing rules. A resident told Kyodo News that, as a result, the area escaped a lockdown.

Similarly, in the Chaoyang district, where many foreign embassies are located, residents complained that the scope of a lockdown covering their residences was too wide, and authorities decided not to impose the measure on Saturday.

A Beijing woman in her 30s said it is "significant" that residents stood up against "unreasonable" anti-virus steps.

Facing growing public anger, the Chinese government said earlier this week it will refrain from implementing citywide lockdowns and instead isolate buildings where COVID cases are reported.

The government earlier this month decided to optimize COVID response measures to rectify the "one-size-fits-all approach and excessive policy steps," including by shortening quarantine periods.

However, the French chamber of commerce in China said in a statement on Thursday that the eased measures had not been implemented uniformly, affecting French companies' business activities.

CCI France Chine called on authorities to "eradicate unnecessary and overzealous restrictions" and said French enterprises wish to see "a clear exit strategy from the zero-COVID policy at some point in the near future."