Japan manager Hajime Moriyasu on Monday stepped into the firing line for his players, telling media that he is ultimately responsible for what happens on the pitch at the World Cup in Qatar.

The 54-year-old former Sanfrecce Hiroshima boss fronted up a day after Japan missed a chance to book a place in the round of 16 with a miserable 1-0 loss to Costa Rica at the Ahmed Bin Ali Stadium in Al Rayyan. 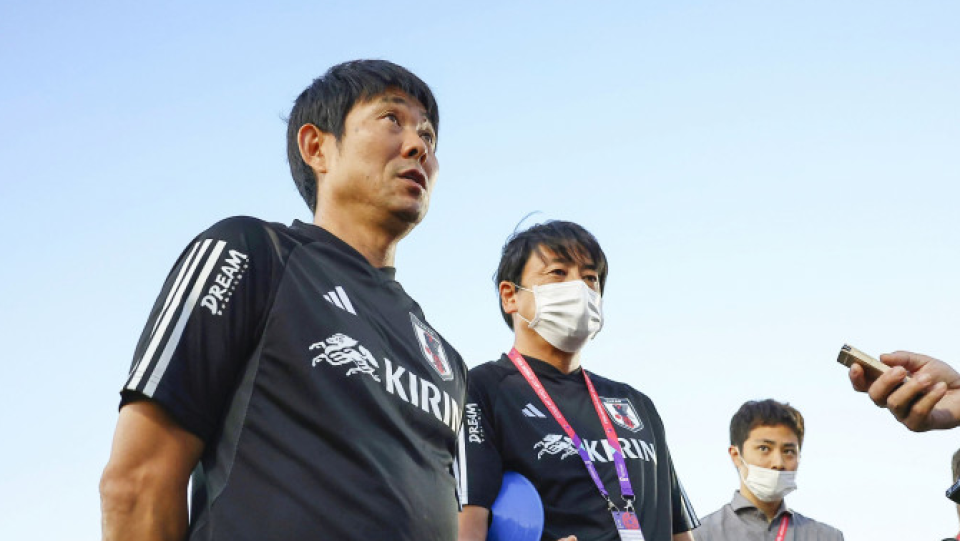 Japan manager Hajime Moriyasu (L) speaks to reporters before training in Doha on Nov. 28, 2022, ahead of an upcoming World Cup group-stage match against Spain. (Kyodo)

"I am entirely responsible for how the players perform. I am in charge of everything for the match, including player selections, tactics, and the way the players are asked to play," he said.

"It is frustrating and unfortunate that we lost, I apologize."

The defeat apparently came at a cost, too, with Wataru Endo not training with the team on Monday due to right knee soreness.

The Stuttgart player has just four days between the Costa Rica game and Thursday's all-important encounter with Spain to make a recovery after remaining at the team hotel on Monday.

Both Takehiro Tomiyasu and Hiroki Sakai were not selected for the Costa Rica game due to hamstring issues, adding to the Samurai Blue's injury woes.

Having given a mea culpa for his team's showing, Moriyasu said he is concerned with the degree of criticism leveled at his players.

"We shouldn't be on an emotional rollercoaster. The victories and defeats are in the past and now we start preparing for the next game," he said.

"We can have a big win (in the next game) like we did against Germany by making incremental strides."

Despite still sitting second in Group E with three points, Japan has a difficult task ahead against a Spain team that put seven goals past Costa Rica and had a chance to beat Germany, only to give up a late equalizer.

"This is the best team in the world," Moriyasu said of Spain.

"They demonstrate their skill by working together even in ferocious battles. We want to win and get past them."