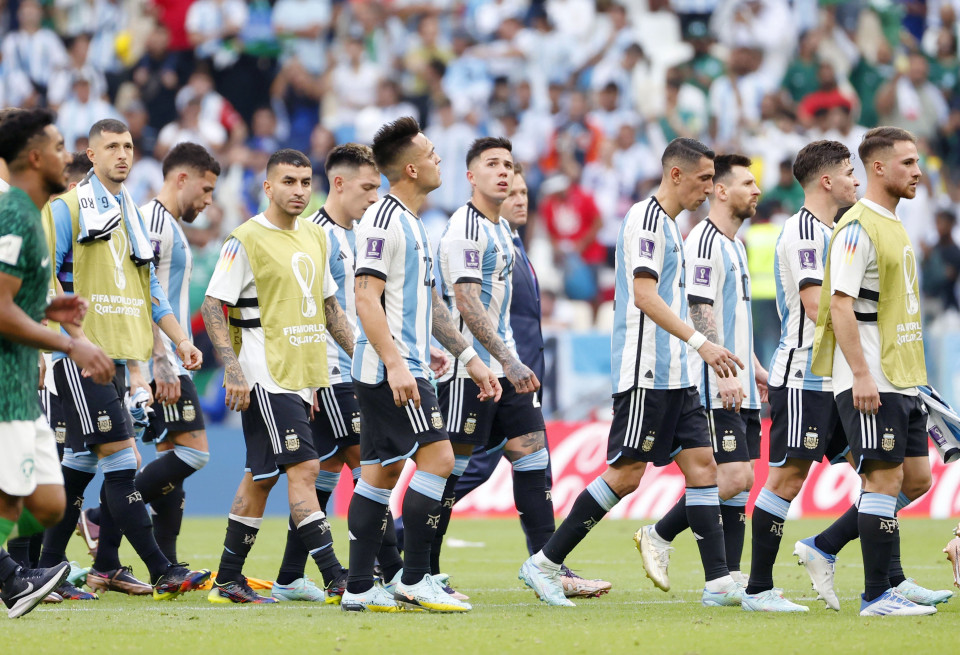 Argentine players leave the pitch after suffering a 2-1 loss to Saudi Arabia in a World Cup Group C football match at Lusail Stadium in Lusail, Qatar, on Nov. 22, 2022. (Kyodo) ==Kyodo

TOKYO - Japan is considering creating a new organization to lead the country's fight against cyberattacks, with control over units of its defense and police forces coping with such attacks, government sources said Wednesday.

The government seeks to arrange in fiscal 2024 a new security budget covering the envisioned body, which expands on the role of the existing National Center of Incident Readiness and Strategy for Cybersecurity, or NISC, they said.

WASHINGTON - Oil from Russia's Sakhalin 2 energy project bound for Japan will be excluded from facing a price cap the United States will roll out as part of efforts to squeeze Moscow's revenues for its war in Ukraine, the Treasury Department said in its guidance released Tuesday.

The price cap, which other members of the Group of Seven and Australia have also agreed to introduce, will take effect Dec. 5 for crude oil. Japanese trading firms maintain stakes in the Sakhalin 2 project, which the government sees as an important energy supply source for the resource-poor country.

TOKYO - Mizuho Financial Group Inc. recently launched a program to increase the number of women in management positions by connecting female employees with board members, as the major Japanese lender seeks to update its services by diversifying its male-dominated management.

The scheme is aimed at addressing the dearth of women in leadership positions stemming from factors including the lack of role models and opportunities for female employees.

Nearly 80% of Japanese firms in Europe affected by Ukraine war

TOKYO - Some 77 percent of Japanese companies in Europe see their operations affected by Russia's invasion of Ukraine primarily through a rise in energy and food prices and disruptions in logistics, a survey showed.

Manufacturers feel the heftier impact, with 83.7 percent in the sector saying their business has suffered due to the war in Ukraine, according to the online survey of 1,445 companies conducted between Sept. 1 and 26 by the Japan External Trade Organization with valid responses from 799.

The medicine for COVID-19 patients aged 12 or older with mild symptoms also became the first drug authorized under the new emergency approval scheme established in May.

DOHA - Germany manager Hansi Flick said Tuesday that Japan's squad has all the qualities required to give his team a difficult time when they face off at the soccer World Cup finals in Qatar.

Speaking a day before the teams meet at the Khalifa International Stadium in their first Group E game, Flick called himself a "big fan" of Japanese soccer before going on to compliment the tactical intelligence, skills and execution of the Samurai Blue players, especially those based in Germany.

The two young guns started Day 11 deadlocked at 9-1, but only 23-year-old Hoshoryu managed to hold serve, dominating fellow sekiwake Mitakeumi to reach 10 wins for the first time as a member of the three "sanyaku" ranks below yokozuna.

TOKYO - About 2,000 people took part in a bicycle event in Tokyo on Wednesday, with cyclists allowed to cross the iconic Rainbow Bridge for the first time since it opened in 1993.

Participants pedaled in the rain on several different courses of varying distances that also took in other parts of the bayside area, including the Odaiba tourist district.