Ferry service between Japan, South Korea resumes after halt due to COVID

JR Kyushu Jet Ferry Inc.'s newly built high-speed ship the Queen Beetle, which can carry up to 502 passengers, left Hakata port in Fukuoka on Friday morning with about 130 people on board.

The resumption of ferry services between the two cities for the first time since March 2020 was in line with the easing of Japan's border restrictions last month. 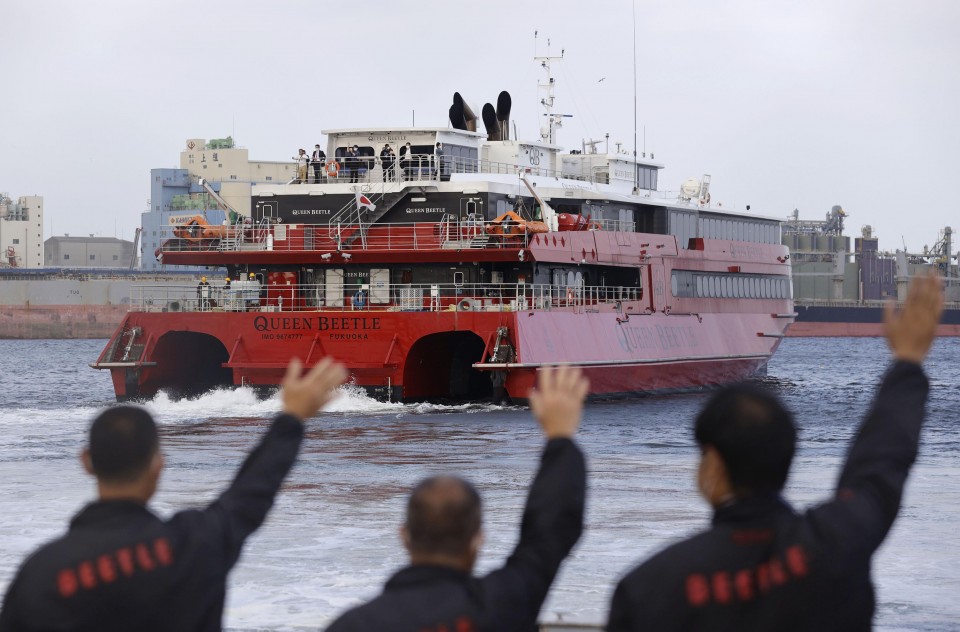 Following Friday's voyage, the ship will operate only on Saturdays and Sundays in November, connecting the Japanese and South Korean cities in three hours and 40 minutes.

A one-way ticket is priced at 16,000 yen ($108) but passengers in November can board the ship for half price to commemorate the restart of services. The schedule from December onward is expected to be announced later, according to the unit of the railway firm Kyushu Railway Co. (JR Kyushu).

"As more customers from South Korea are expected to come to Japan for shopping and dining, we'd like to create a timetable that accommodates their needs," said JR Kyushu Jet Ferry President Masayuki Mizuno.

About 100 to 200 seats have been reserved for each service so far in November, according to a company official.

Kahori Kurata, a 23-year-old resident of Fukuoka, boarded Friday with her mother. "I'm so happy we are now able to casually travel to South Korea. I'm looking forward to enjoying Korean food," she said.

The JR Kyushu group started the route in 1991 and a total of over 6.5 million people have used the service so far, the ferry operator said.

A special event to commemorate the resumption of the service had been planned but the company decided to cancel it after a crowd crush in Seoul late last month that left more than 150 people dead.

Japan has eased border controls with the aim of reviving the country's struggling tourism sector, while hoping that the weak yen will encourage spending by visitors.