An uncrewed U.S. spacecraft was successfully put on course to fly around the Moon and return to Earth after being launched by NASA's megarocket on Wednesday, as the U.S. space agency aims for future flights with astronauts under the Artemis lunar exploration project.

The Orion spacecraft, mounted atop the rocket along with mini devices including a Japanese lunar lander, was successfully separated from the vehicle after the 1:47 a.m. liftoff from Kennedy Space Center in Florida, according to NASA.

Bill Nelson, administrator of the National Aeronautics and Space Administration, told a press conference, "I have to say, for what we saw tonight, it's an A-plus." 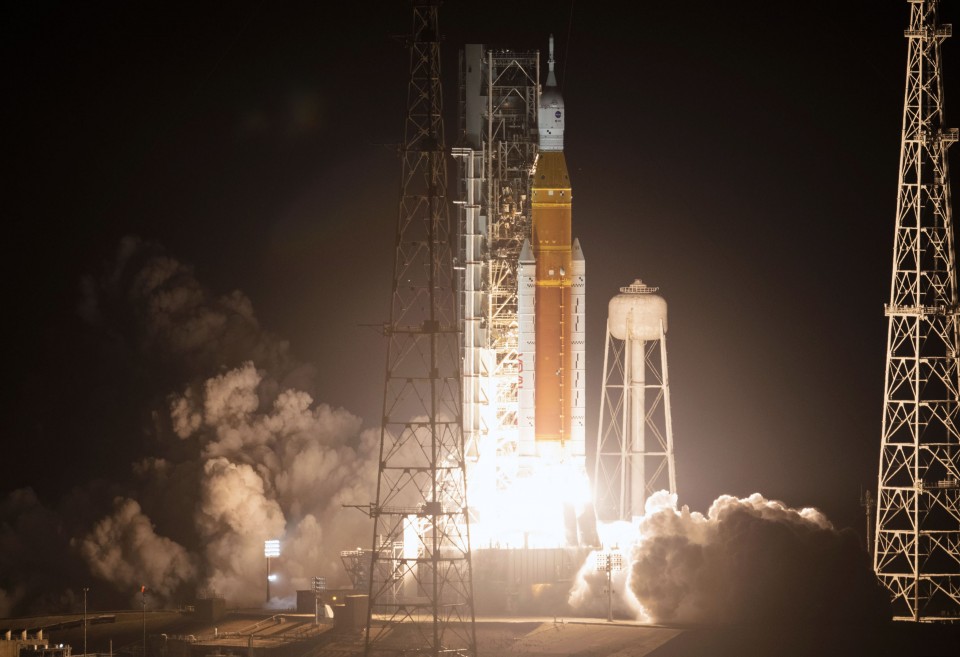 The rocket also carried a unit with 10 shoebox-sized devices to be deployed along the way to perform experiments and technology demonstrations. They include two from Japan -- Omotenashi and Equuleus -- with the former touted as the world's smallest lunar lander.

The Japan Aerospace Exploration Agency said it hopes the Omotenashi lander, measuring 11 centimeters in length, 24 cm in width, and 37 cm in height, will successfully perform maneuvers as the country's first probe to land on the lunar surface.

The lander will travel to the lunar surface at a velocity of 180 kilometers per hour after being released over the Moon. JAXA said it estimates the mission's probability of success at 60 percent.

The other Japanese device, the Equuleus mini satellite, will be heading to the Moon's far side.

Orion and the other devices were launched by the 98-meter rocket called Space Launch System, which NASA says is the most powerful rocket in the world.

The uncrewed spacecraft will be taken 450,000 kilometers away from Earth, flying farther than any spacecraft built for humans has ever flown.

Orion is expected to splash down in the Pacific Ocean on Dec. 11 after orbiting the Moon.

The latest development came after NASA canceled launch attempts in August and September due to an engine-cooling problem and other glitches.

Under the Artemis program, which also involves Japanese and European space agencies, NASA is working to return American astronauts to the Moon for the first time since the conclusion of the last Apollo mission in 1972 and establish a long-term presence there.

The uncrewed flight test is the first in a series of planned Artemis missions, with a key goal being to ensure safe re-entry, descent, splashdown and recovery prior to the first flight with a crew, eyed for 2024.

NASA is hoping to send humans to the lunar surface in 2025 at the earliest and the test-flight of Orion and the other programs are expected to serve as a stepping stone for future astronaut missions to Mars.

The United States and Japan are deepening cooperation in space and affirmed earlier this year their "shared ambition" to realize a future Moon landing by a Japanese astronaut as part of the Artemis program.