About 1,000 people marched in central Beijing through the early hours of Monday, protesting China's strict "zero-COVID" policy, with some openly seeking an end to the "dictatorship" of President Xi Jinping -- a rare show of public anger in the tightly controlled country.

It was the first major demonstration in the capital since Xi came to power in 2012. Similar protests erupted in Shanghai and about a dozen other Chinese cities over the weekend, according to witnesses and videos on social media, reflecting rising public anger over prolonged heavy coronavirus restrictions and lockdowns amid a spike in infections.

The rare protest occurred in Beijing's Chaoyang district, where many foreign firms and embassies are located. Citizens gathered Sunday at a riverside square where a flower stand was set up to mourn victims of a deadly fire Thursday in Urumqi, the capital of the far-western Xinjiang region. 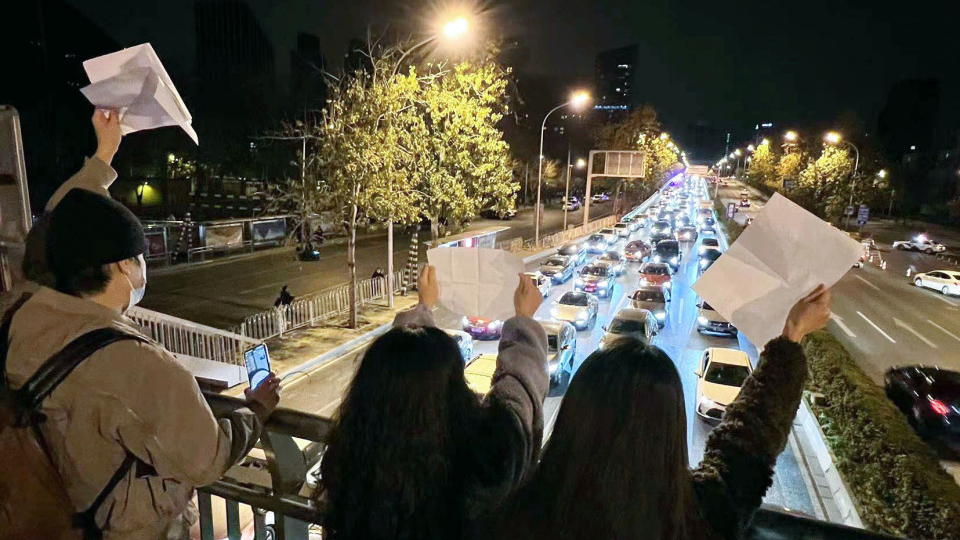 Calls were made online for another protest on Monday night in a Beijing university area, prompting dozens of police vehicles to be deployed there. But with tight security, there have so far been no signs of any fresh rallies.

In Hong Kong, about 30 people including some from the mainland gathered in the central financial district Monday night to criticize China's zero-COVID policy, holding up blank sheets of paper -- a symbol of protest against authorities.

Many of the nationwide rallies were triggered by the fire that killed 10 people, as well as subsequent demonstrations in Urumqi, with speculation growing that lockdown measures may have hampered evacuation and rescue efforts.

On a Shanghai street named after Urumqi, where protests occurred for two consecutive days over the weekend, high fences were set up Monday between sidewalks and vehicle lanes.

A Shanghai protest participant in his 20s said the fences must have been erected to bar citizens' movements and added, "We need global support to change China."

The capital city on Sunday, meanwhile, banned the barricading of buildings in residential compounds, state media reported, in the wake of public criticism over a possible delay in the response of authorities to the Urumqi fire.

The new Xi leadership, launched in October after he won a norm-breaking third five-year term as chief of the ruling Communist Party, faces difficult tasks, including curbing the recent surge in infections and calming angry citizens.

If strict regulations are eased, new cases are deemed certain to rise further. As of Sunday, China had logged daily COVID-19 cases of some 38,800 in the mainland, according to the National Health Commission, with the figure hitting the highest level for the fifth straight day since it began releasing data in the spring of 2020.

On Monday, search results were not shown when the hashtag "Beijing" was input on Weibo, the Chinese equivalent of Twitter, with authorities believed to have censored content to prevent further protests.

Rallies have also been held in the central city of Wuhan, where the outbreak of the virus was first detected in late 2019, the southern city of Guangzhou, as well as Zhejiang, Shandong and Gansu provinces, according to the witnesses and videos.

During the nighttime rally, some Beijing protesters shouted, "No more PCR tests. We want freedom." As participants began to march, many others joined, holding up blank sheets of paper and chanted slogans such as "End the lockdown."

In China, people are required to take COVID-19 tests frequently. Those in locked-down areas are banned from leaving their homes and often find it difficult to procure adequate food and everyday items.

Some participants of the Beijing rally also complained about a lack of votes and press freedom in China.

Many police officers and cars were deployed at the scene, blocking nearby roads. Although they tried to detain some of the participants, triggering calls for release, no violent clashes or detentions were confirmed.

About five hours after the start of the demonstration, crowds were dispersed by police who insisted the rally had obstructed traffic.

A woman in her 30s said, "We have no dignity as we are just obliged to follow government requirements. But as we work hard and pay taxes, we should be protagonists of the country." 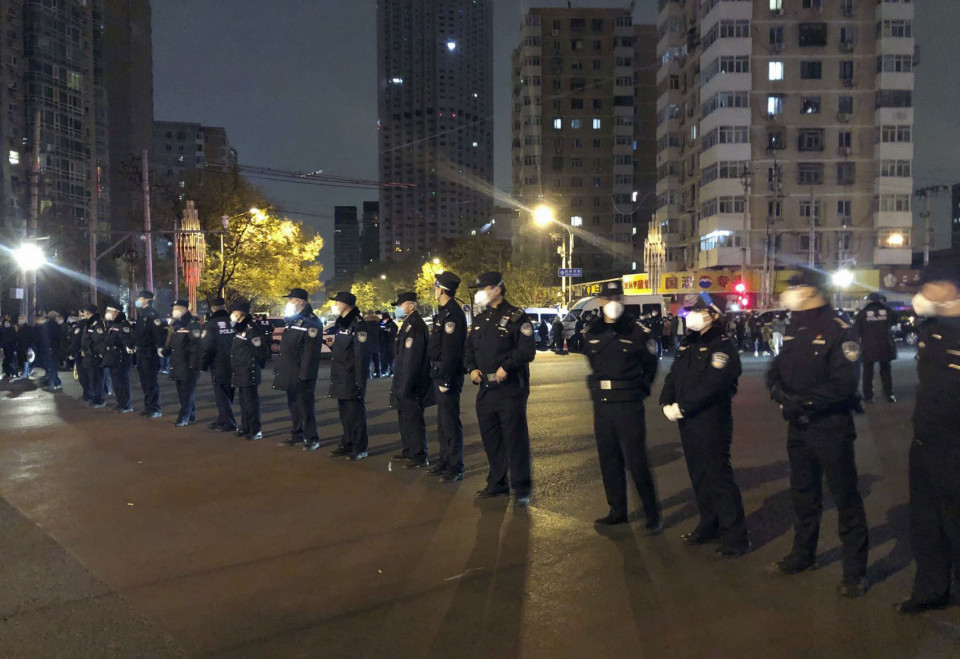 Meanwhile, the BBC said Sunday its journalist Ed Lawrence was detained for several hours while covering the protest in Shanghai and that he was "beaten and kicked by the police."

The British broadcaster said in a statement it is "extremely concerned" about the treatment of its journalist. British Foreign Secretary James Cleverly tweeted the arrest was "deeply disturbing" and said, "Journalists must be able to do their job without intimidation."

The Foreign Correspondents' Club of China urged Chinese authorities in a statement to "protect the safety and right to report" of all journalists working in the country.

Chinese Foreign Ministry spokesman Zhao Lijian told a press conference that the BBC journalist did not identify himself and was escorted away as he did not follow law enforcement officials' instructions to leave the scene.

Japan's ambassador to China, Hideo Tarumi, complained about the zero-COVID policy in an online bilateral economic forum Monday. He noted that Japanese investment in China has been significantly falling over the past three years, partly because of severe restrictions, including quarantine requirements for foreign arrivals.

In a related move, Honda Motor Co. said it has suspended operations of a factory in Wuhan as workers could not report for work due to the restrictions.

Human rights group Amnesty International urged the Chinese government not to detain peaceful protesters and to listen to their calls.

"People have been incredibly patient with lockdown measures, but authorities must not abuse emergency policies. These unprecedented protests show that people are at the end of their tolerance for excessive COVID-19 restrictions," the group's Deputy Regional Director Hana Young said in a statement.