Football: Japan must "go with the flow" to beat Germany, manager says

Japan manager Hajime Moriyasu said Tuesday his players will "go with the flow" and be flexible as they attempt to overcome a formidable German team in their first group game of the World Cup.

Japan faces the daunting task of repelling one of the world's most dangerous attacks in the first World Cup meeting between the nations, and Moriyasu has been preaching to his squad to be "adaptable to the situation."

"We would like to exert our best performance, play aggressively and with perseverance," he said. 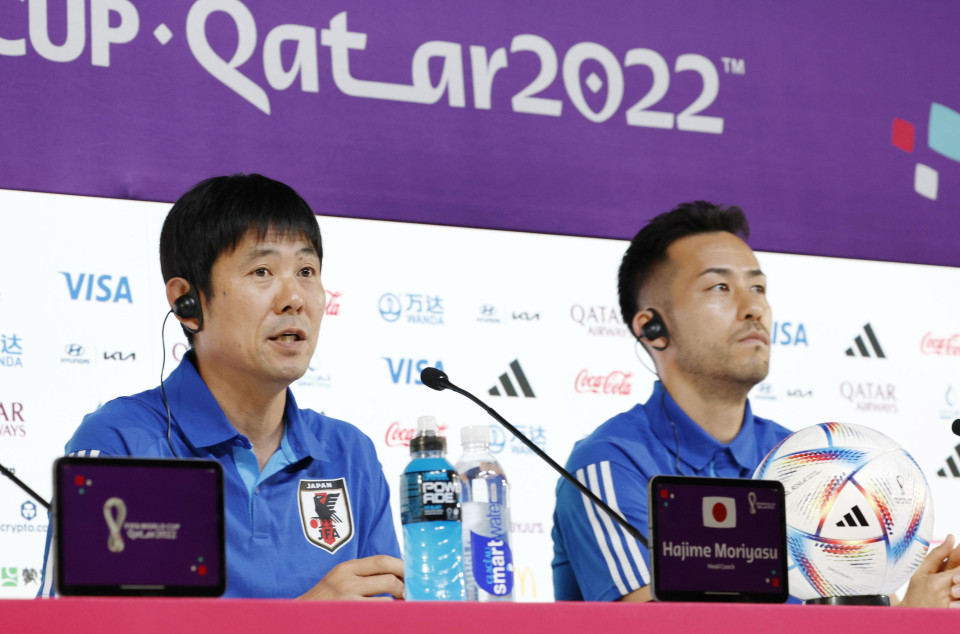 When pushed on the lineup for Wednesday's Group E opener at Khalifa International Stadium, Moriyasu simply said all 26 players were fit, indicating Sporting Lisbon midfielder Hidemasa Morita, who has been dealing with a calf injury, would be available.

With Asian teams initially struggling at the tournament, Moriyasu said now was the time for his squad to "show the world what we can do."

The manager said he closely watched Qatar and Iran's games for any clues about how to play, although fellow Asian side Saudi Arabia's sensational 2-1 defeat of Argentina, completed shortly after Moriyasu's media conference, might offer better inspiration.

He said Japan had taken confidence from beating a range of opponents and would look to win with "persistence and patience."

Veteran of two previous World Cups, captain and defensive stalwart Maya Yoshida will be called upon to help deliver Moriyasu's vision on the pitch.

Seated next to his manager, the Schalke player said he and the seven other squad members currently contracted to German clubs have been "transmitting lessons" to help their national teammates "catch up" to the level of their World Cup opponents.

"Since we knew that we are going to play against Germany, I started to analyze their strikers a lot, but actually playing against them is a much better analysis than just watching a video," he explained.

"This is one of the reasons I went to the Bundesliga, to understand German football."

The four-time World Cup champions could be Japan's toughest opponent of a difficult group, but the Samurai Blue's underdog status allows them to play with a sense of freedom.

"Of course, the first match is the challenging one and to (progress) in this tournament, it is a very significant match and we have to be very courageous and play in full," Yoshida said.

Adding to his manager's mantras, Yoshida gave his own philosophical take to close the press conference.

"Sometimes there is a game you have to win or should win, but there never exists (a game) that we can lose or we should lose, so we still believe we have a chance," he said.