TV dramas in Japan focusing on forensic medicine have been inspiring more young people across the country to take up the morbid career amid growing fascination with unraveling the mysteries behind cases of suspicious death.

Popular shows, such as those featuring doctors who perform autopsies on people who have died due to strange circumstances, appear to be behind the trend. Senior forensic doctors are welcoming the movement as a "bright sign" for the future of the practice, which has often been marginalized. 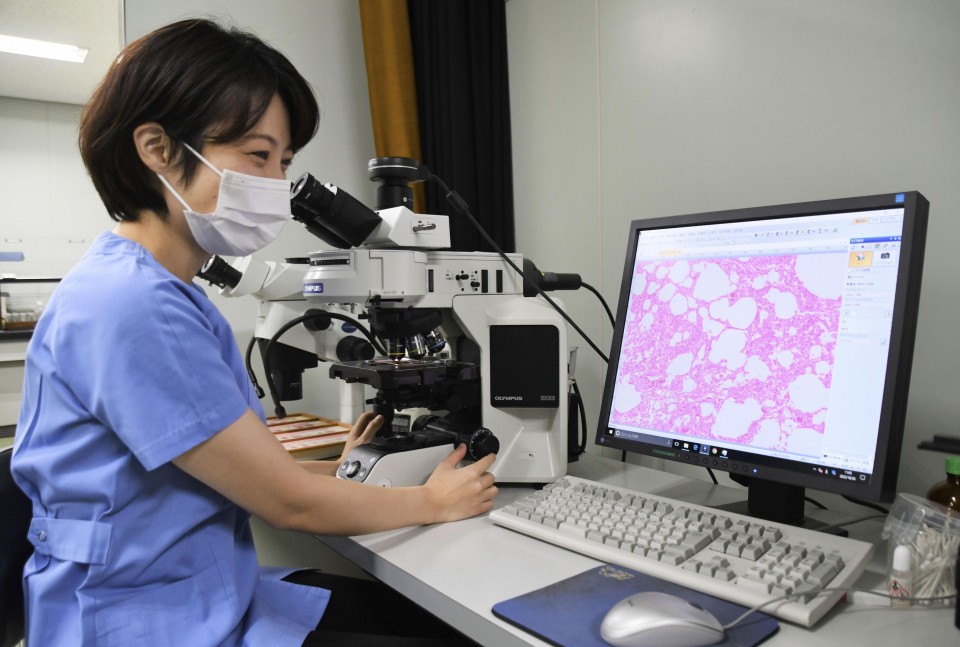 Assistant professor Mamiko Fukuta operates a microscope at the Department of Forensic Medicine of Nagoya City University on Oct. 26, 2022. (Kyodo)

They recall a time not long ago when such medical investigations fell into the oft-derisive category known as "3K," or a "kitsui," "kusai" and "kiken" profession -- translated to a demanding, smelly and dangerous job.

But despite burgeoning popularity, the availability of fulltime positions in the field at universities is scarce, and securing employment for postdoctoral students remains an obstacle.

"I find my job rewarding because it is a service to society," Mamiko Fukuta, 36, an assistant professor in the Department of Forensic Medicine of Nagoya City University, said. "There are new discoveries no matter how many years I work in the profession."

Fukuta became aware of legal medicine when she watched a rebroadcast of "Twinkle" ("Kirakira Hikaru"), a TV series aired on the Fuji Television network in 1998, which put a spotlight on the work of female medical coroners. Inspired by the prospect of attempting to piece together clues from the "voiceless voices" of the dead, she dove into the field of forensic pathology.

Since becoming an assistant professor in 2018, Fukuta has performed autopsies on some 200 corpses. She finds her profession especially rewarding when an accidental death reveals itself to be a murder.

"In those cases, I am happy the body was brought in so I could perform the autopsy," she said.

The job also has minimal impact on her obligations as a parent, making the job all the more attractive compared to clinicians who often receive calls at night, Fukuta said.

According to the Japanese Society of Legal Medicine, the number of doctoral students aspiring to be forensic doctors increased from 68 in fiscal 2016 to more than 100 in fiscal 2020.

Although an official at the society said the reason for the increase is "unknown," the surge appears to have coincided with the airing of popular TV dramas such as "Unnatural" and "Asagao: Forensic Doctor" on the TBS and Fuji networks, respectively, from 2018 to 2019.

The public had long shown little interest in the field of forensics, explained Yasuhiro Aoki, a professor in the department at Nagoya City University, but a desire "to learn about the field has probably deepened through these TV series."

Himeko Kubota, 28, who has just started her journey in the forensics department at Chiba University, is another person who became enamored with the field after watching a similar TV series.

"It is an attractive field because the research results can lead to solving future cases in crimes," she said.

Still, all of the fulltime posts for forensic professionals at the university are occupied by senior doctors, leaving prospects for others after completing the doctoral programs grim.

Kubota herself admits to experiencing anxiety about her future, noting, "I wonder what path to take in my career."

Of the nation's 47 prefectures, 17 have only one fulltime forensic examiner as of May 2020. Facing a shortage of forensic doctors, the government approved a plan at a Cabinet meeting last year to "increase human resources" in the medical examiner field to investigate causes of death.

However, the plan makes no mention of increasing posts in the field, leaving all decision-making on specific measures to prefectural governments and universities.

Although more doctoral students wish to become forensic doctors, "We hesitate to greet them with open arms as the number of posts is limited," Hirotaro Iwase, professor at Chiba University, said.

"I hope that the TV series, among other things, will stimulate public interest in the issue and push the state to adopt long-awaited budgetary measures."