Satoko Tachibatake is convinced she made the right decision to have her intellectually disabled son attend a regular school with classmates without disabilities, although doing so remains a rare step in Japan.

Like many other disabled children, Tachibatake's 8-year-old son Go, who has Down syndrome, was pointed toward a special needs school by local education authorities as he was judged to have difficulties communicating with words.

What made Tachibatake defy the recommendation was an encounter with a member of a group of parents who also have children with Down syndrome. The member said it is essential that such children associate with those without disabilities in order to function as capable adults later in life. 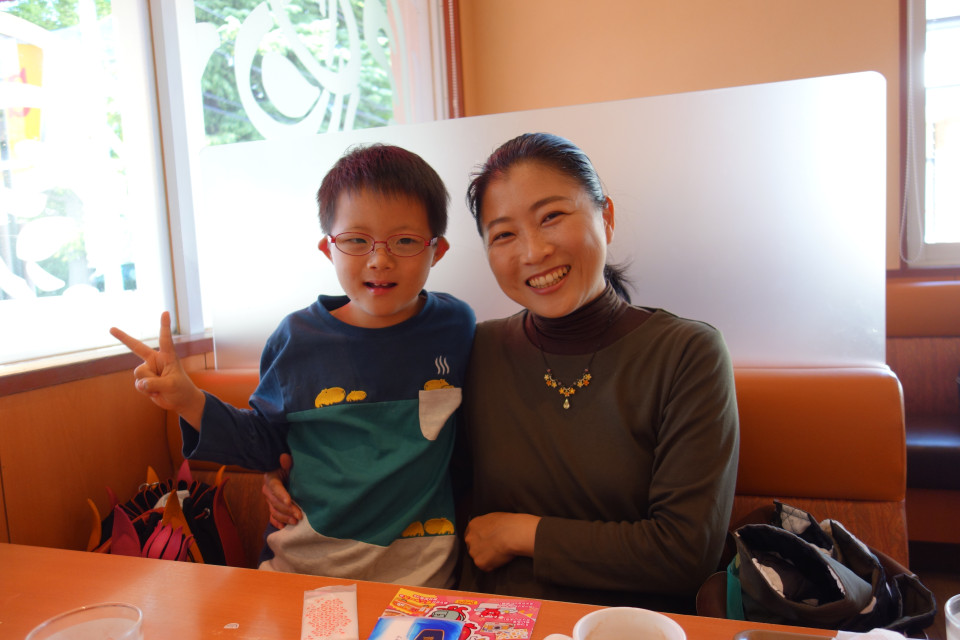 Photo taken on Nov. 3, 2022, in Tokyo shows Satoko Tachibatake (R) and her 8-year-old son Go, who is intellectually disabled but attends a regular school with classmates without disabilities. (Kyodo)

"I was told that disabled children will not be able to communicate with others without disabilities when they become an adult if they are not doing so at an early stage of their life," Tachibatake, 45, said.

But while Go has started attending regular classes, it still feels like he is being viewed as a special needs student, she says. She believes some arrangements are needed to accommodate her son, but thinks they go too far.

Go, for instance, must go to school with an escort or guardian, against his wishes. His mother has also had to find a helper on her own to sit with him in his classes.

"The school treats him as if he was specially admitted here and should really be going to a special needs school," said Tachibatake, who belongs to a group composed of like-minded parents who are also seeking to have their children with disabilities attend regular classes, along with their supporters.

"Most parents with disabled children don't know their children can attend regular classes and that they have the right to receive a reasonable accommodation," she said.

According to the education ministry, the number of children who receive education in special needs classes or schools has been rising in Japan, bucking the international trend for promoting inclusive education where all children study in the same classrooms.

In fiscal 2021, the number of students attending special needs schools and special needs classes in compulsory education was up about 1.2-fold and 2.1-fold, respectively, from 10 years earlier, although the number of children in the country has fallen amid a low birthrate.

A ministry official, however, put the rise down to demand from students and parents. 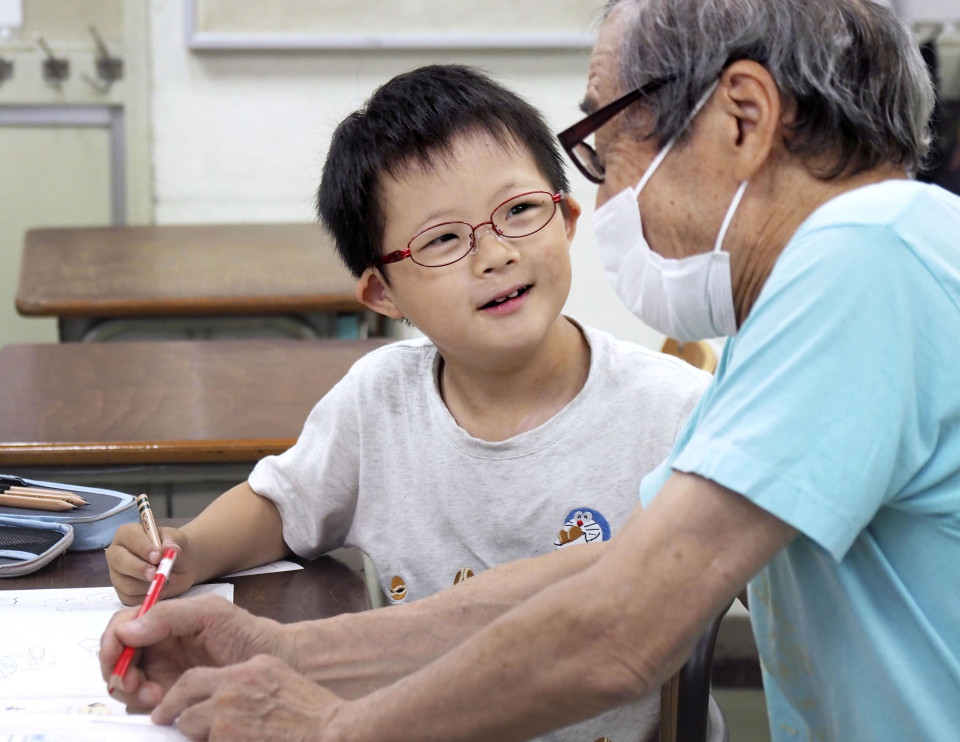 Go Tachibatake attends a mathematics class with his helper at an elementary school in Tokyo on July 4, 2022. (Kyodo)

They "have a better understanding about special education, which offers increased assistance for each child depending on their respective needs," the official said, citing such features as the small classes the children are taught in.

But a United Nations panel that deals with the rights of people with disabilities harshly criticized the situation, urging the Japanese government in September to cease special education that segregates children with disabilities from those without.

The committee recommended Japan "adopt a national action plan on quality inclusive education, with specific targets, time frames and sufficient budget to ensure that all students with disabilities are provided with individualized support at all levels of education."

It was Japan's first time to be subjected to a review since ratifying the Convention on the Rights of Persons with Disabilities in 2014.

Following the recommendation, education minister Keiko Nagaoka said the government will promote inclusive education but also said, "We do not intend to end special needs education, which takes place in diverse learning environments."

Yoshihiro Kokuni, a professor at the University of Tokyo's graduate school of education, said the U.N. recommendation was "an extremely appropriate evaluation," as it was issued after around 100 people consisting of disabled people and their families visited Geneva to exchange views with U.N. panel members.

"Japan is very behind" on the recognition of inclusive education, said Kokuni, a specialist in education. "It's a question of social justice," he said, "not creating a more effective society or one that guarantees a more effective learning environment."

Although society consists of people of various abilities and characteristics, many of Japan's schools, which play such a formative role in children's development, operate in an environment of segregation and exclusion, said Kokuni, who also heads the school's Center for Barrier-Free Education.

He said there will be challenges to realizing inclusive education because of the emphasis placed on academic performance, with teachers pressured to raise their students' grades rather than create a comfortable place for them. 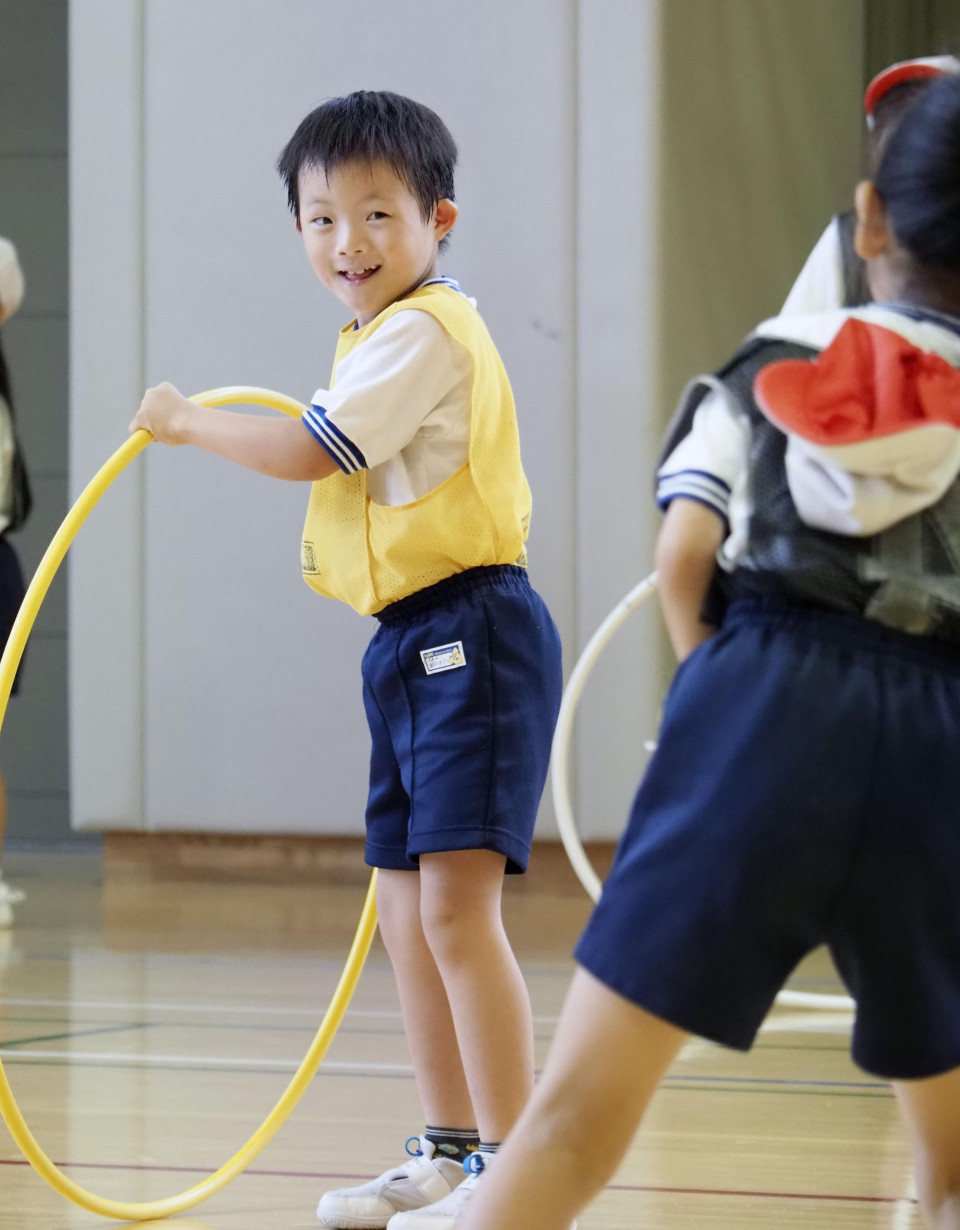 Go Tachibatake attends a physical education class with his classmates at an elementary school in Tokyo on July 4, 2022. (Kyodo)

"I believe that it is school life that guarantees children's growth," Kokuni said, adding that the lessons learned in the classroom form the foundation for a student's education, which they come to cherish later on in life.

"In this sense, we should not think in terms of how to divide the place of learning, but rather how to create a place where children can live together," he said.

Despite the hardships, and her own initial doubts about whether the students without disabilities would benefit just as much, Tachibatake believes having Go attend regular classes has been a transformative experience for all concerned.

She said Go has developed remarkably since starting at the school, where he has come to show a selfless concern for helping others. She has also discovered that his classmates sometimes understand him better than his teachers.

Tachibatake said people in charge of education cannot imagine the positive outcomes of an inclusive approach as many have not grown up with children with disabilities.

"Children with disabilities, including my son, need to learn how to get help when they cannot do certain things," she said. "It is also very important for children around them to have opportunities to learn how to associate with them."