With 63 minutes played in Japan's World Cup opener against Germany on Wednesday, Antonio Ruediger high-stepped as he ushered the ball over the goal line while Takuma Asano sprinted vainly in pursuit.

The Real Madrid player's showboating was a sign of the German team's confidence, and perhaps the lack of respect they had for the threat Japan had posed to that point. 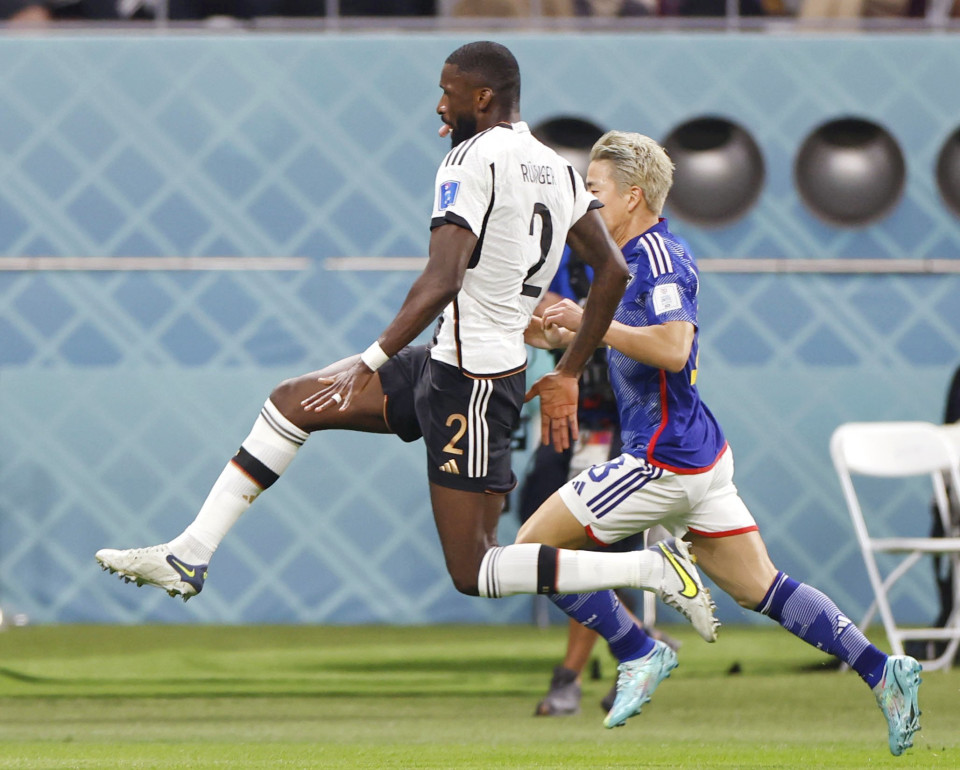 Antonio Ruediger (L) of Germany and Takuma Asano of Japan are pictured in action during the second half of their World Cup Group E football match at Khalifa International Stadium in Doha, Qatar, on Nov. 23, 2022. (Kyodo)

But 20 minutes later, it was Asano whose toes were twinkling after smashing home the winning goal for Japan.

In contrast to Ruediger, Samurai Blue midfielder Daichi Kamada said he and his teammates showed too much respect and they were only able to take the initiative when they played with bravery.

The players will rightly get much of the credit for turning the tide of the game, but they were put in a position to do so by Japan manager Hajime Moriyasu's tactical moves that allowed Japan to secure a 2022 World Cup upset to rival Saudi Arabia's defeat of Argentina a day earlier.

At halftime, he inserted Arsenal defender Takehiro Tomiyasu for midfielder Takefusa Kubo to plug the right side of defense that had been under assault by David Raum and others, then changed formation, putting three at the back and allowing his veteran wing-backs Yuto Nagatomo and Hiroki Sakai to push up in attack.

Wataru Endo described it as "almost like five at the back," saying it allowed them to understand their roles more clearly in the midfield and up the aggression.

The formation change was combined with a slew of subs as the former Sanfrecce Hiroshima boss sent on Kaoru Mitoma and Asano, and a little over 10 minutes later Ritsu Doan and Takumi Minamino.

The change slowed an until-then rampant but tiring Germany and gave Japan a platform, and a group of speedy young World Cup debutants, to use in attack.

Before the match, several Japanese players had spoken about the Germans having a possible weakness in defense, while Germany manager Hansi Flick had repeatedly praised the Japanese players' technical ability.

Those factors combined in both goals. In the first, Brighton & Hove Albion's Mitoma surged forward and found a free Minamino, with the Monaco player putting in a powerful cross that forced German keeper Manuel Neuer to parry into Doan's path.

The Freiburg winger took his chance with his left foot, and Japan were in the game.

"I went on to the pitch telling myself there's no one but me who can do it, (I was) very determined," Doan said.

The second goal was all Asano.

The Bochum man skillfully controlled a long ball with one touch and sprinted off toward goal, holding the towering Nico Schlotterbeck off with his left arm and then slamming the ball between Neuer and his near-post with his right foot.

He said he went on determined to shoot at every opportunity, and it paid off.

In both goals, the German defense lacked urgency, giving Japan the space to strike, and they were good enough to do so.

Looking forward, Moriyasu must ensure this golden opportunity is not wasted through a sub-par performance against Costa Rica on Sunday, with a win almost guaranteeing Japan will reach the round of 16 for the second consecutive World Cup, a feat they have never achieved before.

"We won't be overly swinging from joy to sorrow, we'll look back at things that need to be looked at and aim for the win at the next game," Moriyasu said. 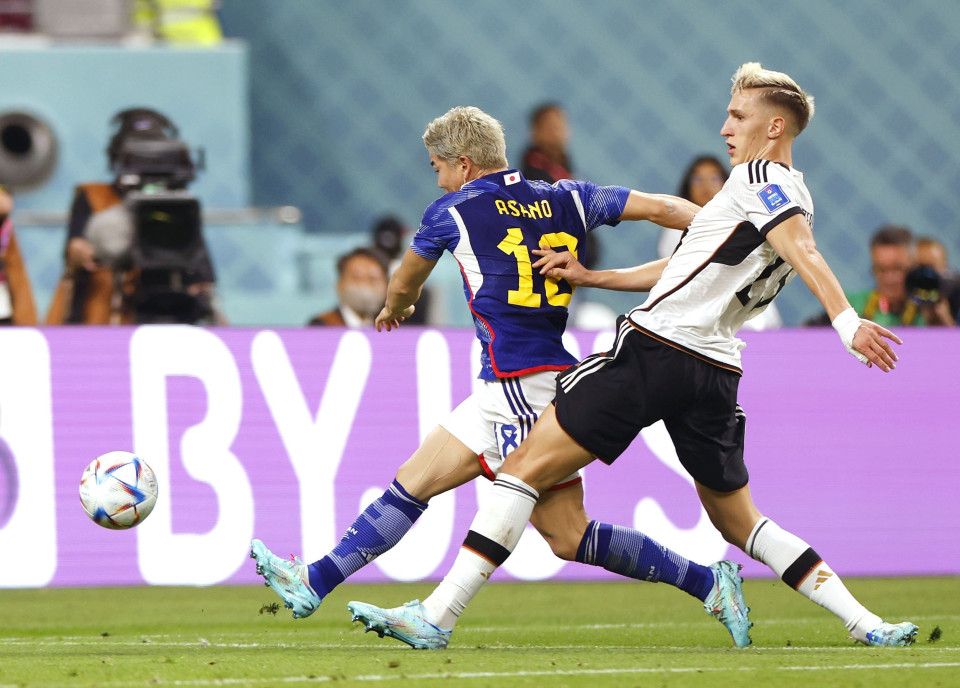 Takuma Asano (L) scores Japan's second goal in the second half of a World Cup Group E football match against Germany at Khalifa International Stadium in Doha on Nov. 23, 2022. (Kyodo)