Despite a fruitless decades-long fight to secure the return of her daughter who was abducted by North Korean agents at age 13, Sakie Yokota says her yearning for any information about her child's whereabouts remains unrelenting.

"There is nothing more painful than knowing nothing at all," said Yokota, 86, in a recent interview with Kyodo News near her home in Kawasaki outside Tokyo ahead of Tuesday's 45th anniversary of her daughter Megumi Yokota's disappearance.

She added that she is "always believing" she will be reunited with Megumi, who would have turned 58 on Oct. 5. 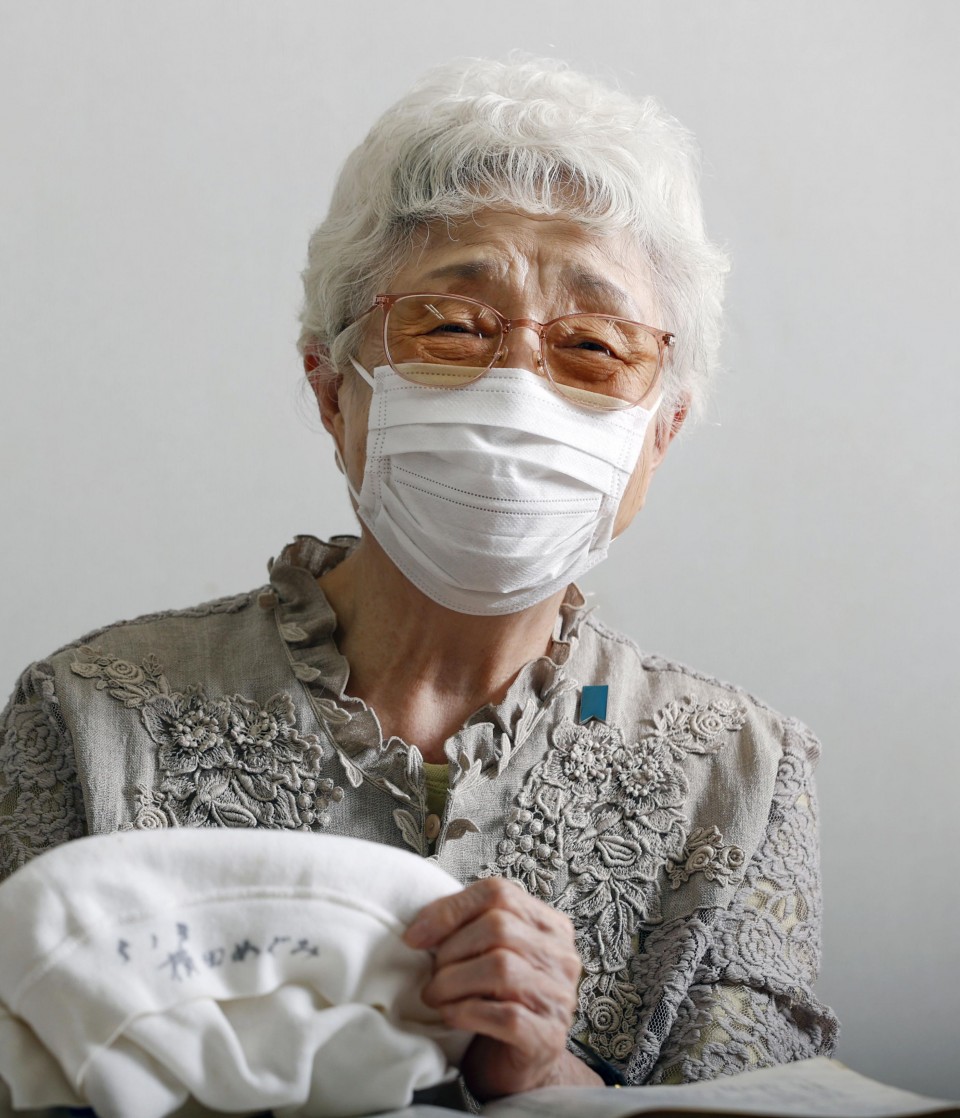 Sakie Yokota speaks in an interview on Oct. 6, 2022, in Kawasaki, Kanagawa Prefecture, holding a gym shirt her daughter Megumi used to wear. (Kyodo)

Sakie has felt constant infuriation at the long wait for any progress on the abductions issue. Now, the outlook for a resolution has become even darker due to North Korea's repeated ballistic missile launches and Japan's tightening of sanctions in response.

"What has the Japanese government been doing all these years with North Korea snatching away the victims?" she asked. "We need somebody with a strong heart to have talks with North Korea. Only by repeating such talks can we expect some action from the North Korean side."

Megumi is among 17 Japanese nationals the Japanese government officially lists as having been abducted by North Korea throughout the 1970s and 1980s. The government also alleges Pyongyang's involvement in many other disappearances.

Five abductees were returned in 2002 after then Japanese Prime Minister Junichiro Koizumi met with North Korea's Kim Jong Il in Pyongyang on Sept. 17 of that year, the first-ever summit between the two countries that do not maintain diplomatic ties.

North Korea has told Japan that eight abductees, including Megumi, have died, and the rest never entered the nation. Remains that Pyongyang returned to Japan claiming they were Megumi's were proven in 2004 through DNA analysis not to be hers.

For Sakie, the lack of progress becomes more and more pressing each year as families of the missing get older and older.

Sakie's husband Shigeru, who spearheaded the campaign to bring back the abductees as the inaugural leader of the group of abductees' families set up in 1997, died in 2020 at age 87. 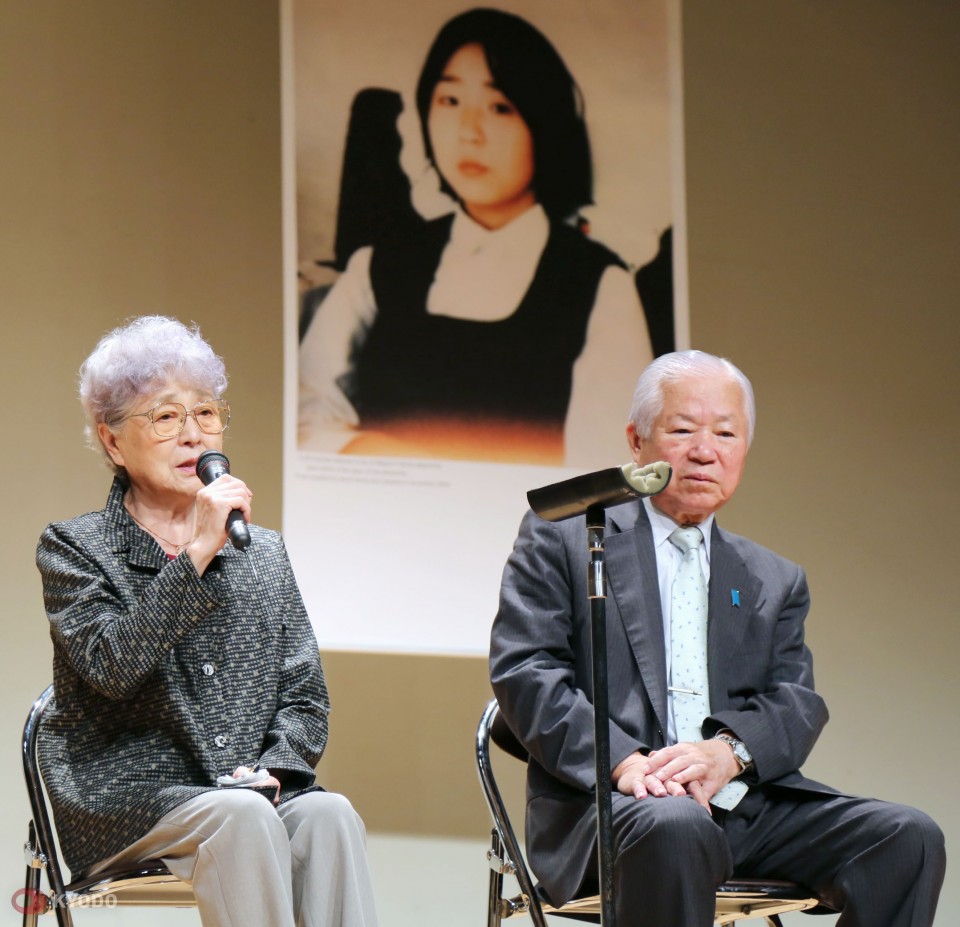 File photo taken in September 2014 in Niigata, northwest of Tokyo, shows Shigeru Yokota (R) and his wife Sakie, with their daughter Megumi's portrait seen behind them. Shigeru Yokota died on June 5, 2020, at age 87. (Kyodo)

Megumi was kidnapped by North Korean agents while on her way home from badminton practice at her junior high school in the city of Niigata on the Sea of Japan coast on the evening on Nov. 15, 1977.

Sakie says she vividly remembers that night, searching the dark neighborhood with her twin sons, Megumi's younger siblings Takuya and Tetsuya. It was the day after Megumi gave her father a comb as a birthday gift, advising him to "dress up more," Sakie said.

Shigeru always carried the comb with him as a memento wherever he traveled to beg for the return of the abductees.

"She disappeared like smoke, leaving nothing behind, from a place so close to our home," Sakie said.

As days passed without any contact from Megumi or information about her whatsoever, Sakie said she went "mad." With the matter "totally out of my hands," she began to believe "I'd be better off dead," she recalled.

After 20 painful years, out of the blue, accounts by a North Korean agent who defected to South Korea brought to the attention of Shigeru by a secretary of a Japanese lawmaker in 1997, indicated North Korea's state involvement in the disappearance of Megumi.

The Yokotas decided to make public their daughter's name and images. They urged the nation to support the movement calling for the repatriation of Japanese abductees, for which they eventually won backing from the government.

They traveled across Japan to attend and speak at rallies and also tried to make their plight known overseas by meeting four U.S. presidents, most recently President Joe Biden, as well as testifying before a U.S. congressional panel and speaking before U.N. human rights working group in Geneva.

Sakie has repeatedly said it is ultimately up to the Japanese government to bring about change. 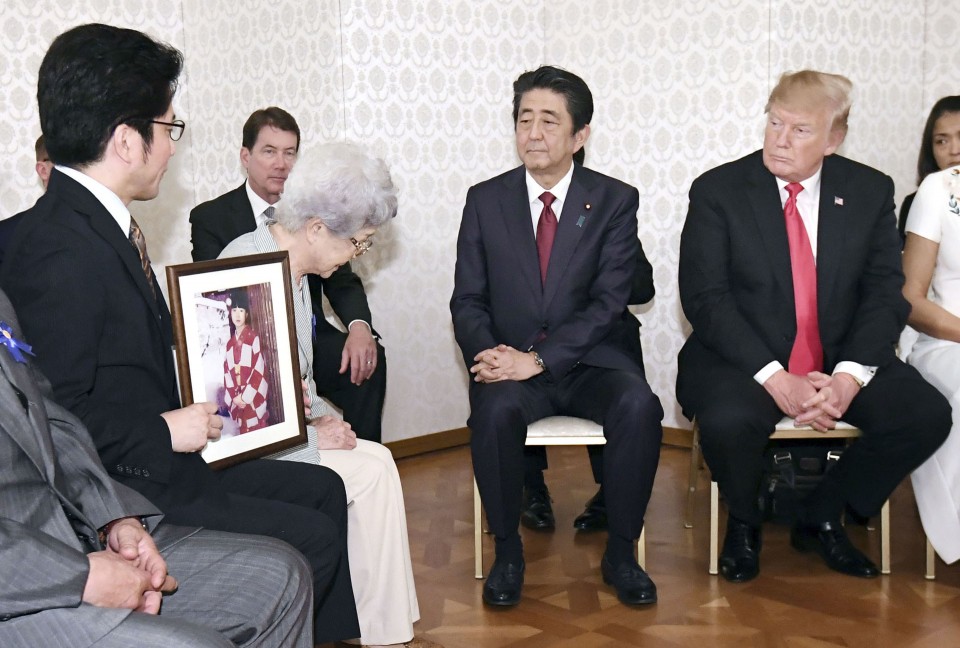 U.S. President Donald Trump (R) and Japanese Prime Minister Shinzo Abe (2nd from R) meet the families of Japanese nationals abducted by North Korean agents in the 1970s and 1980s, on May 27, 2019, in Tokyo. Among the attendees of the meeting was Sakie Yokota (2nd from L).(Kyodo)

Despite the heartbreaking ordeal, she says she manages to maintain peace in her heart thanks to the words of the Bible, first introduced to her by a neighbor.

"I couldn't believe in anything, but when I learned of God's presence, it helped me understand why I face these unthinkable challenges," she said.

Sakie said she started with Chapter 1 Verse 21 from the Book of Job, which read, "Naked I came from my mother's womb, and naked I will depart. The Lord gave and the Lord has taken away; may the name of the Lord be praised."

She said, "'The Lord gave and the Lord has taken away,'-- These simple words really touched my heart" at a time when she could not understand why such suffering had been inflicted on her.

"But I learned that the God has the power to give and take lives" and has authority over all the circumstances of life, good or bad, she said.

Prime Minister Fumio Kishida -- the 13th premier since the government in 1997 recognized Megumi's suspected abduction by North Korea -- has said he is willing to meet with the North's current leader Kim Jong Un without preconditions to resolve the abduction issue.

However, Song Il Ho, North Korea's ambassador responsible for negotiations to normalize the relationship with Japan, said in September that the issue of abductions of Japanese citizens has been "already resolved," criticizing Tokyo for imposing sanctions.

Song said Japan has rendered "null and void" the historic 2002 Pyongyang Declaration, under which the two countries agreed to make efforts toward normalizing ties. Tokyo said its policy based on the accord remains unchanged.

In the years of accumulated sadness, Sakie said she and her husband experienced a rare moment of joy when they met their granddaughter Kim Eun Gyong, who was born to Megumi and Kim Young Nam, a South Korean abducted by North Korea. They also were introduced to their great-granddaughter, Megumi's granddaughter, in Mongolia in 2014.

"It was a strange moment. For the first time amid the suffering and tragedy, we experienced a little bit of joy," Sakie said.

"We were very fortunate. There are other family members of the abductees who have not met their grandchildren," she said. "We just want all the abductees to be alive, to be well and return to Japan. We won't ask for anything more."