Timing and trickery in the raised ring threw the championship race into turmoil in the 15-day meet at Fukuoka Kokusai Center. 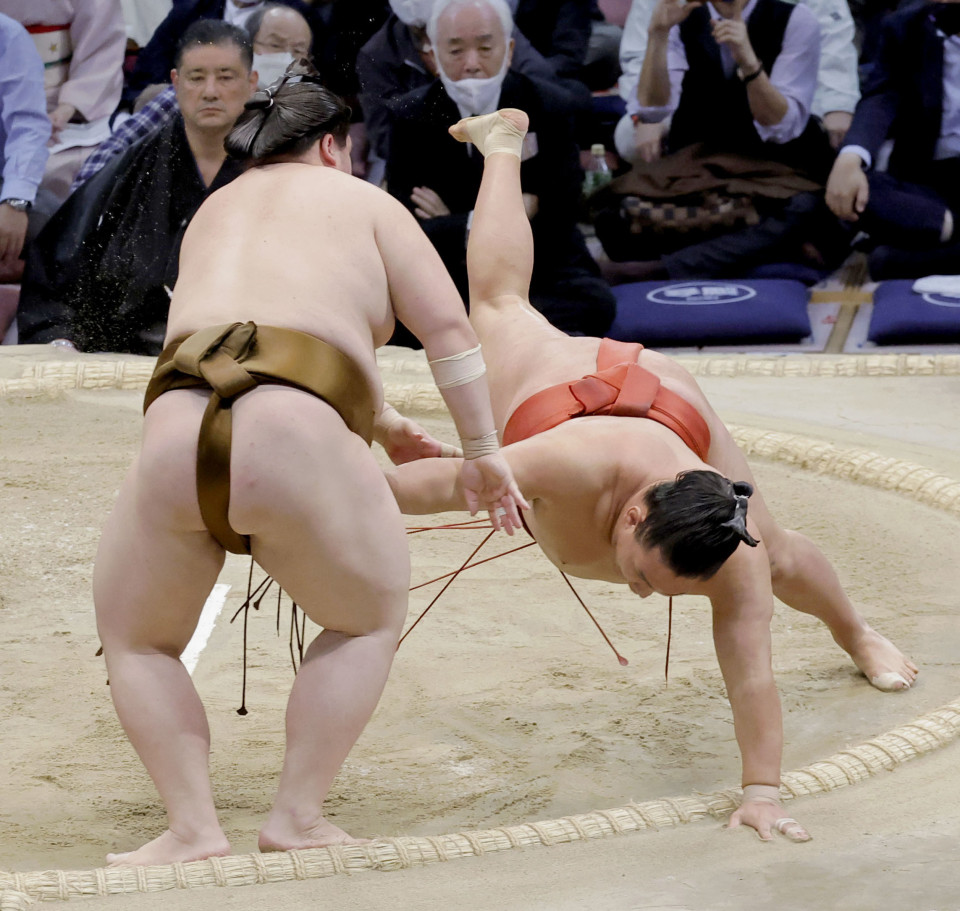 Hoshoryu (R) loses to Oho on the 12th day of the Kyushu Grand Sumo Tournament at Fukuoka Kokusai Center in Fukuoka, southwestern Japan, on Nov. 24, 2022. (Kyodo)

The 22-year-old Oho, the grandson of iconic yokozuna Taiho and the son of former sekiwake Takatoriki, handled the sekiwake's charge before exploiting his opponent's aggression to win easily.

When Oho stepped back, Hoshoryu, 23, the nephew of former Mongolian yokozuna Asashoryu, powered straight forward. The maegashira shifted to his left to avoid the brunt of his opponent's charge, slipped his right hand behind Hoshoryu's neck and brought him down.

The win left both wrestlers, and No. 1 maegashira Takayasu tied with 10-2 records.

Former ozeki Takayasu also used impeccable timing against Ryuden (7-5). After knocking the No. 6 backward on the charge, Takayasu stepped back, suckered Ryuden forward and pulled him down with a hand behind the neck.

Ozeki Takakeisho, who won both his grand tournament championships in November, stayed one win back, the pushing-and-shoving master schooling No. 5 Nishikifuji (8-4) and propelling him from the ring. No. 9 Abi and No. 15 Kagayaki also won to improve to 9-3.

Shodai, fighting as a demotion-threatened "kadoban" ozeki, fell to within one loss of demotion at 5-7. Mongolian komusubi Kiribayama (8-4) exploited an instant of indecision by Shodai to take control and force him out.

Mitakeumi, demoted from ozeki to sekiwake after September's tourney, shoved out No. 4 Sadanoumi (5-7) to earn his fifth win and retain hope of a winning record.