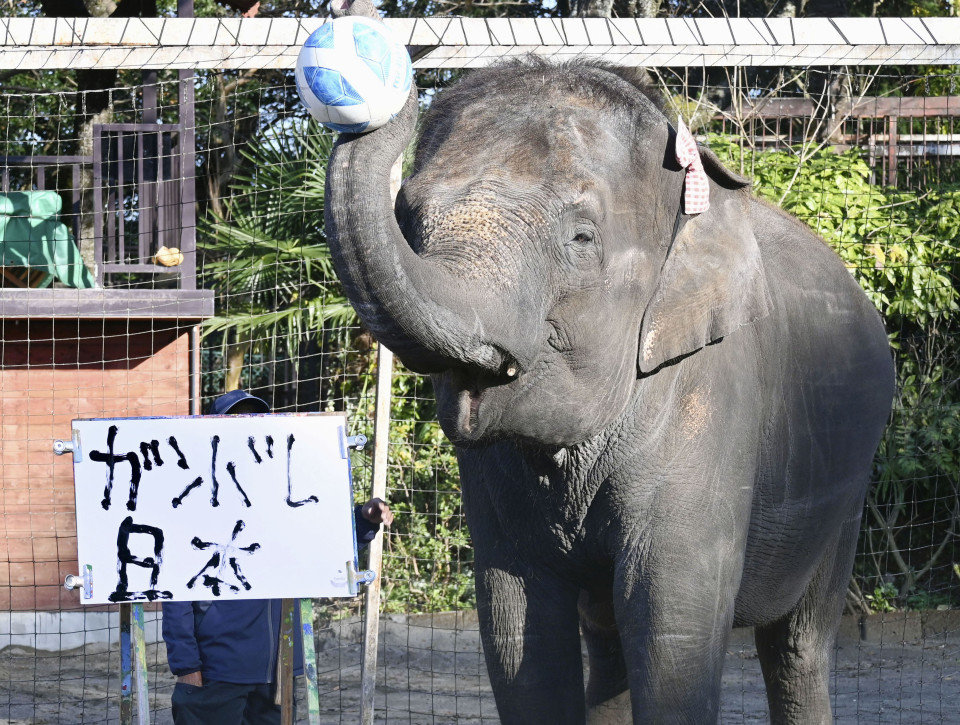 Yumeka, a 15-year-old Asian elephant, is pictured next to a canvas with a good luck message for the Japan national football team taking part in the World Cup in Qatar, which she wrote using a brush at Ichihara Elephant Kingdom in Ichihara in Chiba Prefecture, eastern Japan, on Nov. 25, 2022. (Kyodo) ==Kyodo

TOKYO - The support rate for Japanese Prime Minister Fumio Kishida's Cabinet has dropped to 33.1 percent, the lowest since its launch last year, a Kyodo News survey showed Sunday, after three of his ministers were forced out in less than a month.

The approval rating was down from 37.6 percent in the previous poll conducted in late October, while the disapproval rating rose to 51.6 percent, exceeding 50 percent for the first time since Kishida took office in October last year, according to the two-day nationwide telephone survey conducted from Saturday.

TOKYO - Nearly a quarter of major companies in Japan are considering raising the prices of their products next year or later due to increasing material costs and a weaker yen, a Kyodo News survey showed Sunday.

Of the 80 companies surveyed, including Toyota Motor Corp., Nintendo Co. and Shiseido Co., 23 percent said they are mulling price hikes on consumer products, while 49 percent said they were undecided about doing so.

TOKYO - Yoichi Sai, a film director known for his realistic depictions of the stories of Koreans living in Japan in the 1993 film "All Under the Moon" and the 2004 film "Blood and Bones," died of bladder cancer at his home in Tokyo on Sunday, his family said. He was 73.

Yosuke Matsuoka wanted the Holy See to speak to President Franklin Roosevelt to try to prevent "a war of mutual destruction," telling Cardinal Luigi Maglione that Tokyo also wanted a cease-fire with China after more than three years of war, according to a summary by the cardinal's office of a meeting on April 2, 1941, between the two.

UTSUNOMIYA, Japan - The brother of a French woman who went missing from the eastern Japan city of Nikko in July 2018 has arrived in the country for the first time in three years to continue the search for his sister.

Tiphaine Veron, 40, had intended to spend two nights in Nikko starting July 28, 2018, but disappeared the following morning after leaving the lodging house she was staying at in the popular tourist destination.

No. 9 maegashira Abi completed a remarkable turnaround in the 15-day tournament at Fukuoka Kokusai Center, having been forced to sit out the September meet with knee and ankle injuries.

Following the defeat, Tsai offered to step down as head of her independence-leaning party.

DOHA - Costa Rica manager Luis Fernando Suarez was forced to insist "we are not dead" Saturday in his pre-match press conference ahead of his team's World Cup game against Japan, while Hajime Moriyasu felt the need to say little more than "we will do our best."

The two managers find themselves in very different situations. Suarez is under huge pressure after his team gave up seven goals in their opening-match demolition by Spain, while Moriyasu has been enjoying widespread praise for his tactical moves that many say delivered Japan their upset 2-1 win over Germany.