Japan winger Kaoru Mitoma scored his first goal for Brighton on Saturday as his stellar display helped them secure a 3-2 away win at Wolverhampton Wanderers in the English Premier League.

Hidemasa Morita of Sporting Lisbon and Ayase Ueda of Cercle Brugge also netted in a promising weekend for the Japanese World Cup hopefuls in Europe.

Mitoma, in his second straight start under new manager Roberto De Zerbi, played a part in the 10th-minute opener at Molineux, using the outside of his boot to pass to Leandro Trossard who laid the ball off for Adam Lallana to curl home. 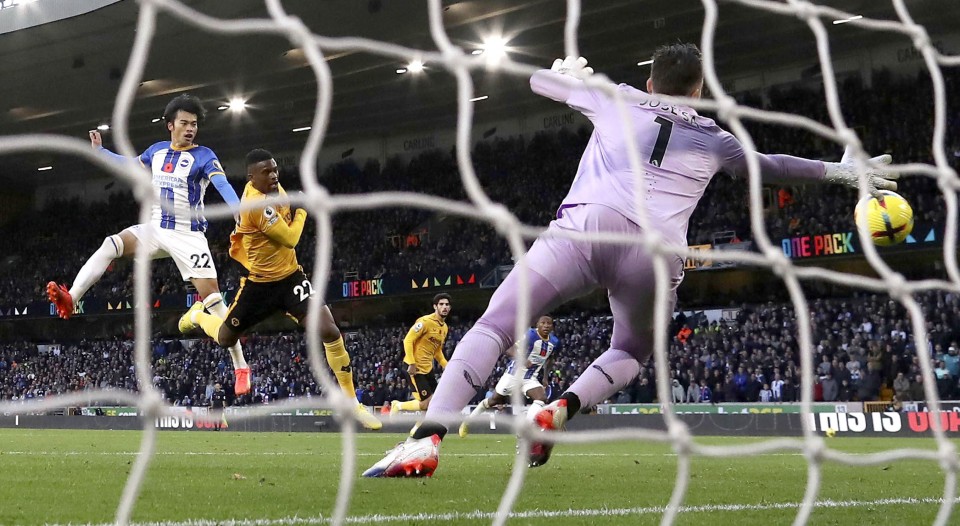 Mitoma could not stop Goncalo Guedes from netting the leveler down his side two minutes later and Ruben Neves' 35th-minute penalty gave Wolves the lead, but Mitoma turned the game on its head before the interval.

Lallana danced his way past defenders outside the box before his cross found Mitoma, who rose high at the far post to score a rare header to open his Brighton account a minute from the break.

Mitoma then latched on to a Lewis Dunk long ball in stoppage time and his fine control at the edge of the box drew a foul from Nelson Semedo, who was shown a straight red with the winger seemingly on his way to a one-on-one with the keeper.

"I was surprised myself (with the headed goal), but I'm not bad at headers to start with," said Mitoma. "I've produced results for the first time so I can rate myself for that, and it was good I could make my team play more easily by getting them go down to 10 men."

Mitoma also played his part in Brighton's winner seven minutes from time, dribbling his way to the byline before his cutback fell to Pascal Gross, who steered high into the net.

"That is my pattern," said Mitoma, still recovering from the right ankle injury he sustained in mid-October. "I haven't reached a stage where I can take strong shots, so I'm restraining myself."

"I was assuming I'd be chosen, but it psyched me up for sure," said Mitoma, expected to play a big role in Qatar for the Samurai Blue, who take on Germany in their Group E opener on Nov. 23.

Midfielder Morita scored his third goal of the season in Portugal, doubling Sporting's lead with a left-footed 40th-minute volley from close range en route to their 3-0 win over 10-man Vitoria. Marcus Edwards hit a brace for the home side.

Forward Ueda scored a thumping 36th-minute header for his sixth goal of the season in Belgium as Cercle Brugge claimed a late 2-1 win over Leuven.

Daichi Hayashi, not in Japan's World Cup squad, scored in the second straight game for his fourth goal of the season, the forward hitting a fine 77th-minute leveler to help Sint-Truiden claim a 2-1 win at 10-man Seraing.

In the Scottish Premiership, Kyogo Furuhashi, overlooked by Hajime Moriyasu for the World Cup, bagged his ninth goal this term as he headed home a 90th-minute winner from a flicked corner in Celtic's 4-2 home win over Dundee United.

Football: Mitoma in strong return for Brighton, Kubo out with injury