Japan winger Kaoru Mitoma continued his fine run of form for Brighton on Wednesday, striking the decisive goal in a 3-1 upset against Arsenal in the English Football League Cup.

The Samurai Blue speedster started the second half at Emirates Stadium and gave the visitors a 2-1 lead against the run of play in the 58th minute.

Capitalizing on one of their limited opportunities, the Seagulls carved apart the Arsenal defense on a quick counterattack before Mitoma buried his shot from the left of the area. 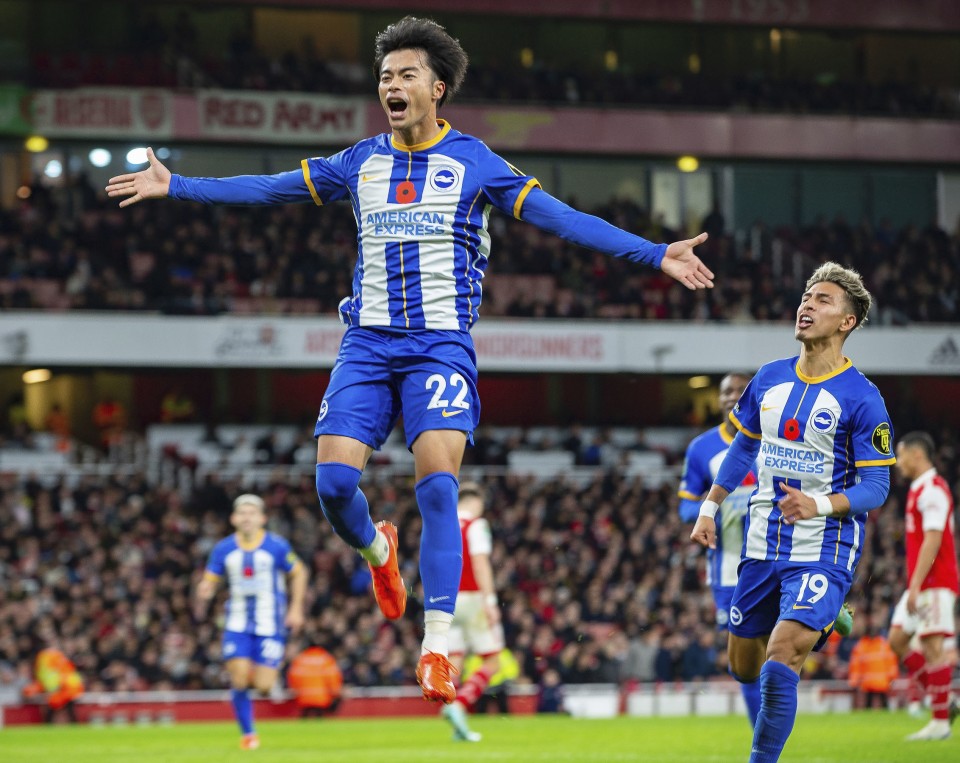 Kaoru Mitoma (L) of Brighton celebrates after scoring a goal against Arsenal in an EFL Cup game in London on Nov. 9, 2022. (Kyodo)

The 25-year-old Mitoma scored his maiden English Premier League goal in a match-winning performance away to Wolverhampton Wanderers on Saturday.

Eddie Nketiah had given Premier League front-runners Arsenal the lead midway through the opening half before Danny Welbeck equalized from the penalty spot. Tariq Lamptey made it 3-1 to Brighton from another counter in the 71st minute.

Japan defender Takehiro Tomiyasu was left out of the Arsenal squad as he bids to recover from a thigh injury in time for the Nov. 20 to Dec. 18 World Cup in Qatar.

In the Scottish Premiership, Japanese attackers Kyogo Furuhashi and Daizen Maeda were both on target in Celtic's 2-1 win on the road against Motherwell.

Furuhashi, who was surprisingly left out of Japan's World Cup squad, gave the visitors an early lead with his 10th league goal of the season, while the Qatar-bound Maeda netted his third of the campaign to make it 2-0 with six minutes left.

Japan forward Ayase Ueda struck for Cercle Brugge in a 3-1 win over Beerschot in the Belgian Cup, extending his scoring streak after netting in the league on Saturday.

Samurai Blue captain Maya Yoshida played the full 90 minutes and contributed to a clean sheet in Schalke's 1-0 win over Mainz in the German Bundesliga.