After navigating a challenging stretch of his career, Takumi Minamino is looking to fulfill his promise as one of the most talented Japanese players of his generation by helping the Samurai Blue achieve their best-ever result at the World Cup.

The attacker made a name for himself on the world football scene over the past four years, winning a transfer to Liverpool while establishing himself as his nation's focal point in attack. 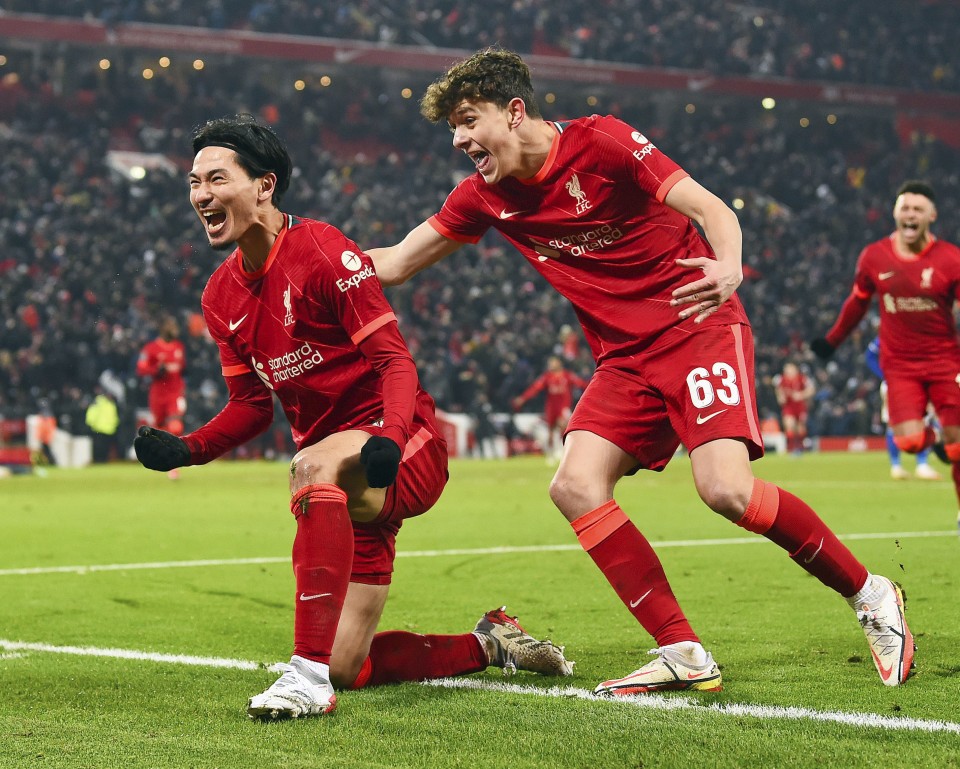 Takumi Minamino (L) celebrates after scoring a late equalizer against Leicester in the English League Cup quarterfinals on Dec. 22, 2021 in Liverpool, England. (Kyodo)

Handed the No. 10 shirt for his World Cup debut in Qatar, the 27-year-old has vowed to eclipse his country's best record to date of a place in the last 16, as he starts to hit form at the right time with his new French club Monaco.

"I feel strongly about the World Cup, as I'm yet to experience it," Minamino told Kyodo News recently. "We can't just go there but need to leave something. We want to go to the last eight or beyond." 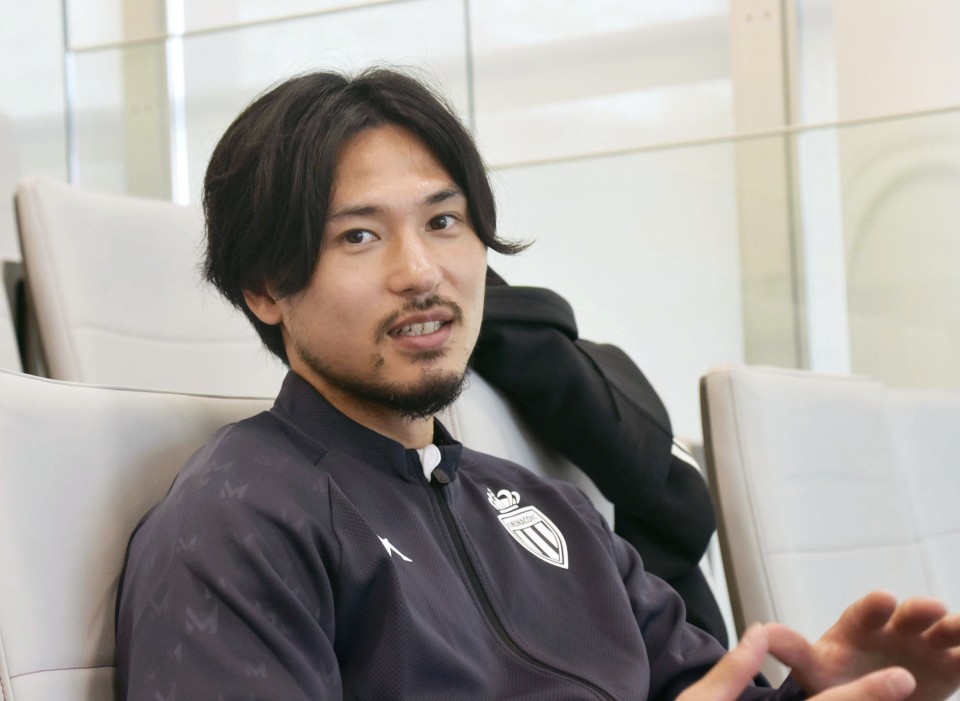 Monaco's Takumi Minamino during an interview with Kyodo News on Nov. 10, 2022 in La Turbie, France. (Kyodo)

The former Cerezo Osaka youngster was only among the backup members for the 2014 World Cup in Brazil and missed out on the 2018 tournament in Russia despite helping Red Bull Salzburg to the last four in the Europa League that season.

"(The 2018 World Cup) was something I always had in my mind, but I wasn't a player getting called up regularly and didn't feel like I was going to make the cut," he said. "It was still frustrating, though, to see players from my generation getting picked."

"Time flies really fast in the world of football and I learned it first hand in these four years...Looking back, I have more memories of frustration during that time and I want to throw everything at the World Cup, including that emotion."

Minamino has been the most capped player under current Japan manager Hajime Moriyasu with 41 games and is also the top scorer with 17 goals, matching Keisuke Honda's record in the process of scoring in seven straight Asian qualifiers.

His lack of playing time with Jurgen Klopp's star-studded Liverpool side coincided with his less productive final qualifying outings for Japan, when he netted just once. But vying for a starting spot during his challenging two-and-a-half-year stay in England was an irreplaceable experience.

"(Mohamed) Salah and (Sadio) Mane were the two players who trained more than anyone," he said. "Thiago (Alcantara) got lots of injuries but he was really professional, trying to avoid them by doing exercises I've never seen before. (James) Milner was a real veteran but was fresher than anyone and led with his voice in training."

"There've been moments I thought, 'What if I had played constantly during that period?'. I'm striving now to make sure I can say I gained something (from that time)."

Minamino is proud of "the biggest match" of his football career, when he scored a goal and set up another in Salzburg's 4-3 loss at Liverpool in October 2019 in the Champions League -- a performance that essentially won him a move to the English giants.

After winning the Premier League in his first season on Merseyside and leading Liverpool in scoring in their victorious League Cup and FA Cup campaigns last season, Minamino feels the World Cup is a different subject for a footballer.

"One could get that individual reward (of transfers) by performing in tournaments like the Champions League," he said. "The World Cup is more about whether you can leave your name in history. It's been one of my targets, and I want to leave something there."

Things are starting to click for Minamino at a hard-training Monaco side following a difficult start, scoring once and setting up three in nine Ligue 1 games. 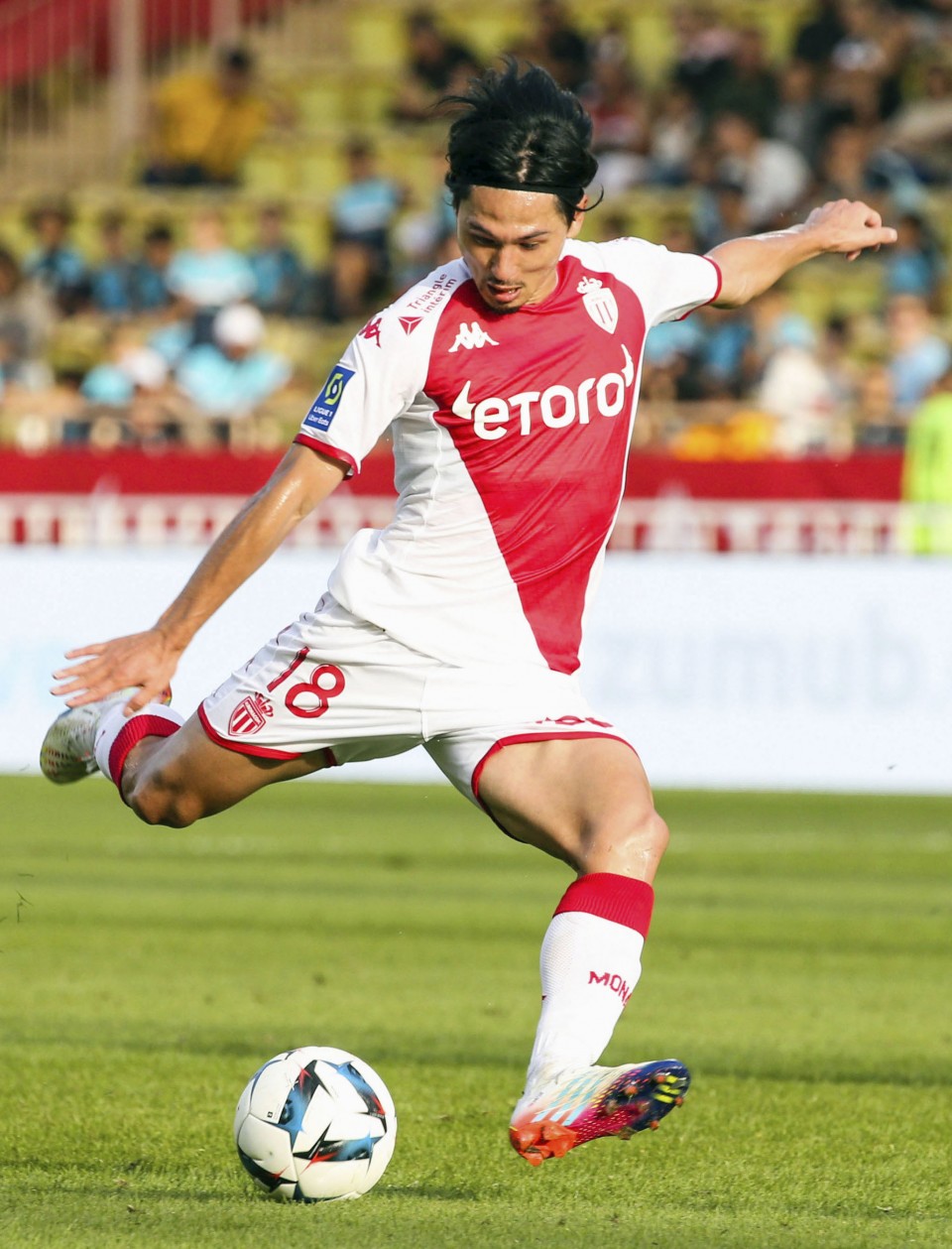 Monaco's Takumi Minamino in action during a French Ligue 1 game against Angers on Oct. 30, 2022 in Monaco. (Kyodo)

"I had lost some of the feeling with the ball at my feet along with confidence, but I'm gradually getting them back and I'll get even better as my physical condition improves," he said.

Although strong seasons so far from fellow attackers Daichi Kamada, Takefusa Kubo and Kaoru Mitoma mean Minamino's starting berth is no longer a guarantee, his focus has not shifted as he looks to emulate former Samurai Blue No. 10s when called up on the biggest stage.

"The team result is the only thing that matters at the World Cup. I don't mind who scores or performs as long as Japan can progress the farthest possible," he said. "I'll always act with the team's best interests in mind, even if I'm playing off the bench."

"Great players like recently retired Shunsuke Nakamura and Shinji (Kagawa, formerly of Cerezo), who I really respect, have worn it. I want to receive that baton and prove Japan's No. 10 is special with my play."

Japan were drawn into their toughest-ever group in their seventh straight World Cup, facing former winners Germany and Spain on either side of a tricky Costa Rica side in Group E. 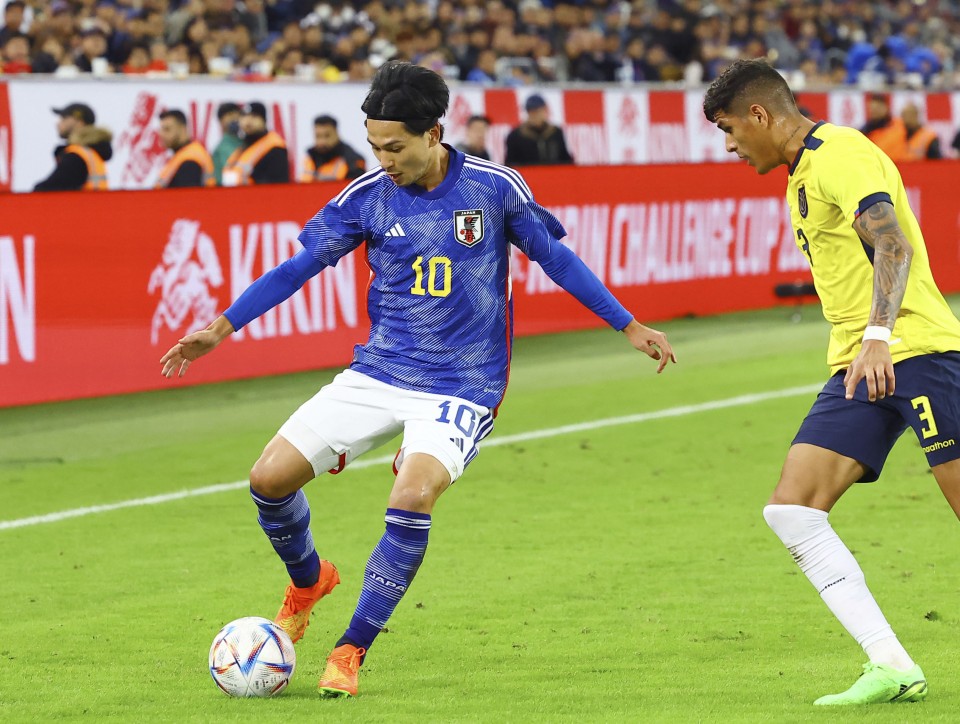 Japan's Takumi Minamino (L) in action against Ecuador during an international friendly match on Sept. 27, 2022 in Dusseldorf, Germany. (Kyodo)

But Minamino feels Japan are no longer at a stage where they fear their opponents because of their reputations.

"We just play as we usually do in Europe, although it might be a bit of an advantage to have many players who know the opposition," Minamino said. "Most of our current players play in Europe, and those selected from the J-League are also very experienced (playing abroad)."

"There isn't a single player scared to face overseas players. It's not that sort of era anymore."