The foreign ministers of Japan and the United States on Friday agreed to "pay close attention" to China after President Xi Jinping started last month a rare third term as chief of the ruling Communist Party with new leadership, according to a Japanese official.

Meeting on the sidelines of the Group of Seven foreign ministerial gathering in Germany, Japanese Foreign Minister Yoshimasa Hayashi and U.S. Secretary of State Antony Blinken also reaffirmed close bilateral cooperation toward the denuclearization of North Korea as concerns grow over a barrage of missile tests by Pyongyang. 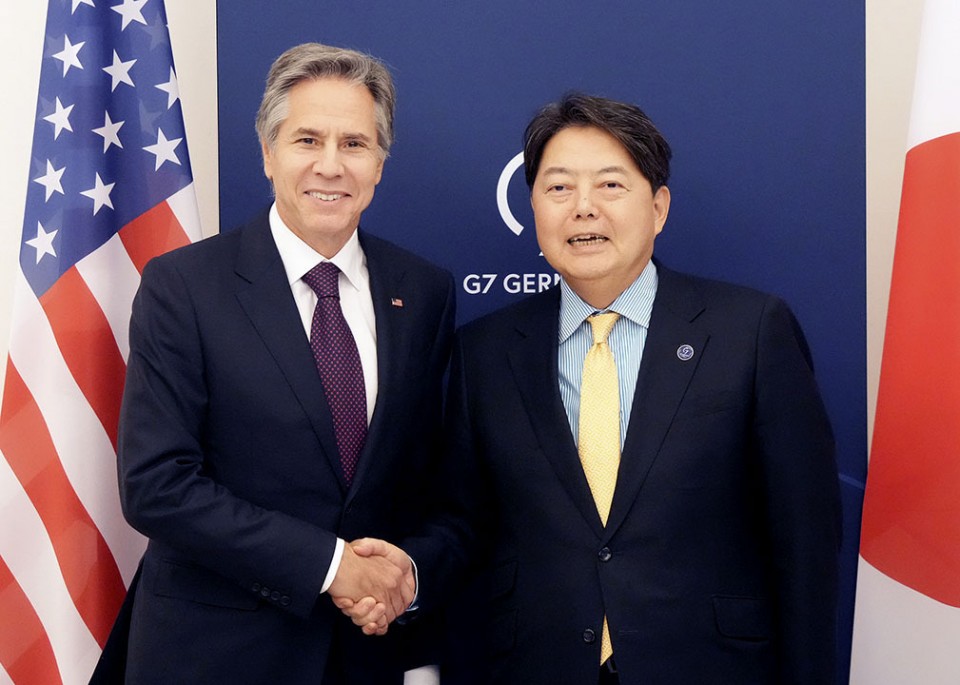 The launches, seen at an unprecedented pace this year, are "totally unacceptable," Hayashi said at the outset of the meeting in the western German city of Munster, touching on the test-firing of an intercontinental ballistic missile on Thursday and a missile that landed near South Korea's territorial waters a day before.

Blinken said the series of provocative actions by North Korea only reinforces the "absolute" U.S. commitment to the security of Japan and South Korea, as well as deepens the three countries' determination to "work even more closely together" to take measures against Pyongyang's repeated violations of U.N. Security Council resolutions.

North Korea is also believed to have made preparations to conduct its seventh nuclear test, which would be the first since September 2017. Such behaviors have intensified security concerns in the Indo-Pacific area, where China has been growing assertive, including over Taiwan.

Hayashi and Blinken reaffirmed the importance of peace and stability across the Taiwan Strait during their 30-minute conversation, according to the Japanese government official.

Taiwan is a self-ruled democratic island that Beijing regards as a breakaway province to be reunified with the mainland, by force if necessary. Concerns are growing that Xi may take a more hardline stance on the island as he accelerates his concentration of power.

The Japanese official said the two diplomats agreed to monitor developments including over the new leadership lineup, which has been stacked with Xi loyalists.

Hayashi hailed the U.S. administration of President Joe Biden for mentioning in its recently released National Security Strategy that the U.S. defense commitment under their bilateral security treaty covers the Senkaku Islands in the East China Sea, located just 170 kilometers from Taiwan.

China has carried out repeated incursions into Japanese waters around the Senkaku Islands, which are controlled by Tokyo but claimed by Beijing.

Hayashi and Blinken also reaffirmed the need to bolster the bilateral alliance's deterrence and response capabilities amid the increasingly challenging security environment and to work together to support Ukraine as it fights back against Russia's aggression, according to the Japanese Foreign Ministry.

The two had already held a brief conversation on Thursday over North Korea's missile tests that took place earlier in the day and on Wednesday.

North Korea's latest missile launches appeared to be in retaliation for the first large-scale joint air exercise by the United States and South Korea in five years, which began in late October.

A North Korean Foreign Ministry spokesman said the country's military activities that followed the air drill were "due reaction and action warning to the hostile provocations," according to a statement carried by the official Korean Central News Agency on Friday.

North Korea "once again clarifies that it will never tolerate any attempt of the hostile forces to infringe upon its sovereignty and security interests but respond to it with the toughest counteraction to the last," the statement said.