A long-awaited theme park featuring beloved characters and scenes from Studio Ghibli’s hit animations is set to open Nov. 1 in central Japan’s Aichi Prefecture, treating fans to the wonders and secrets of Ghibli films such as “My Neighbor Totoro” and “Castle in the Sky.”

Ghibli Park, built inside a commemorative park on the site of the 2005 World Expo in Nagakute, will first open three areas -- Ghibli’s Grand Warehouse, Hill of Youth, and Dondoko Forest -- to be followed by two other areas scheduled for completion over the next two years. 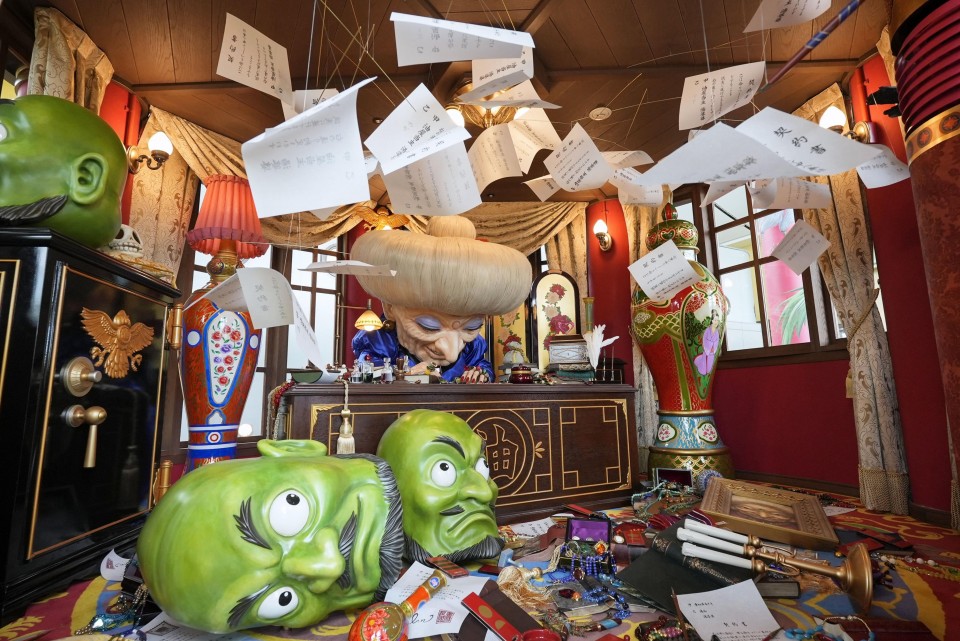 A space recreating the office of the character Yubaba in “Spirited Away” in the Ghibli’s Grand Warehouse area at Ghibli Park in Nagakute, Aichi Prefecture, is shown to the press during a media preview on Oct. 12, 2022.
(Copyright Studio Ghibli)(Kyodo)

Japanese director Goro Miyazaki, who supervised the creation of the theme park, said during a media preview this week, “Thanks to the trees and landscape in the park, it feels as if the world of Ghibli has always been here since long time ago.”

Miyazaki added that he was glad to be able to fulfill a promise made with his father, the renowned Japanese animator Hayao Miyazaki, to construct Ghibli Park in five years’ time from the start of planning for the project. 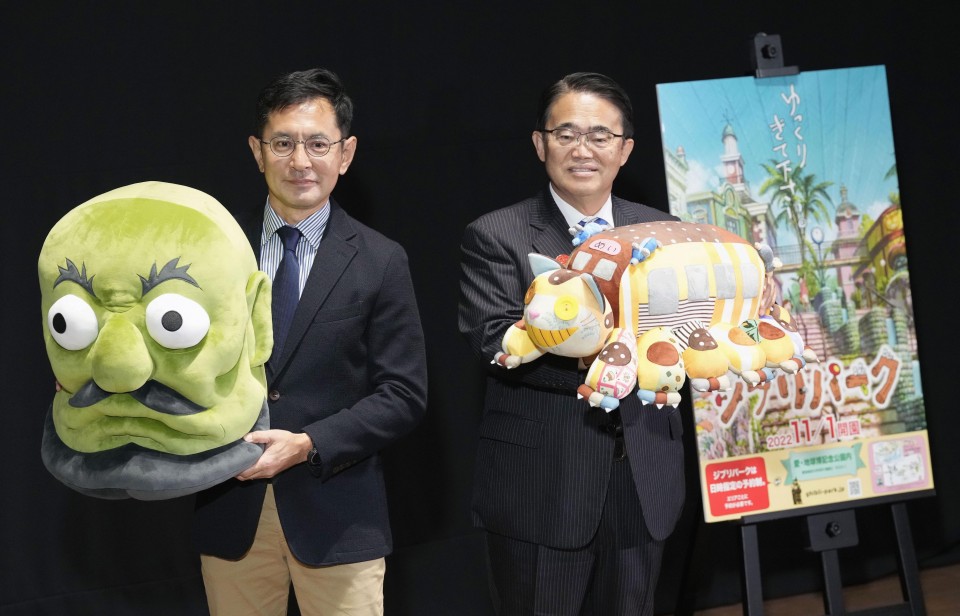 Ghibli’s Grand Warehouse, the park’s main area, is an indoor facility showcasing artifacts and exhibits from past Studio Ghibli films, such as the iconic airship, robot soldier and ruined garden from the 1986 film “Castle in the Sky.”

Visitors can also take photos with Ponyo speeding across the ocean from the 2008 film “Ponyo,” or sit next to the character No-Face on the train that runs on the sea in the Oscar-winning 2011 film “Spirited Away.” 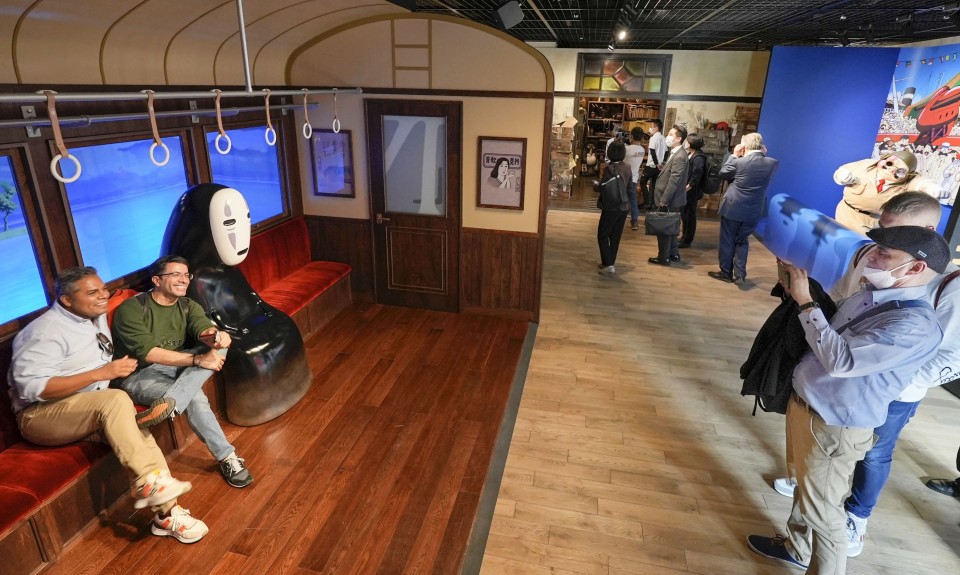 An exhibit recreating a scene from “Spirited Away” in the Ghibli’s Grand Warehouse area at Ghibli Park. Visitors can take photos sitting next to the character No-Face on the train. (Copyright Studio Ghibli)(Kyodo) 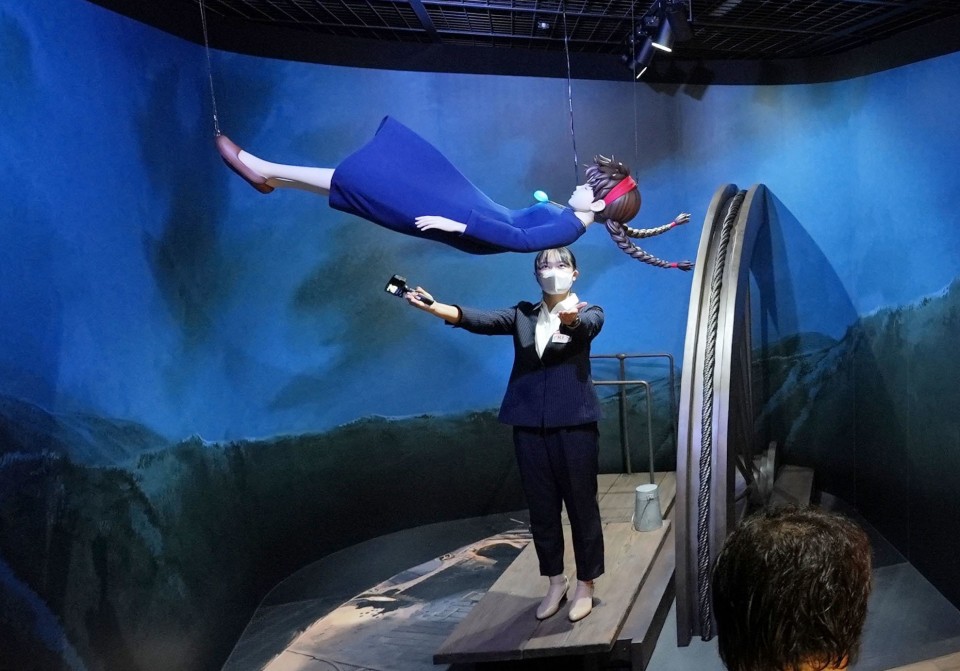 An exhibit recreating a scene from “Castle in the Sky” in the Ghibli’s Grand Warehouse area at Ghibli Park. (Copyright Studio Ghibli)(Kyodo) 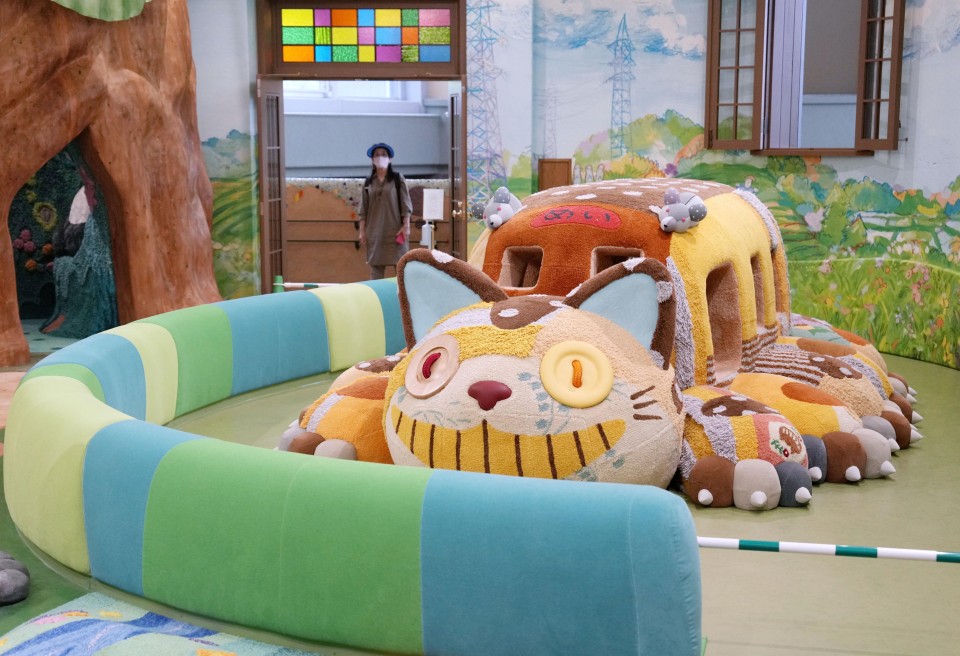 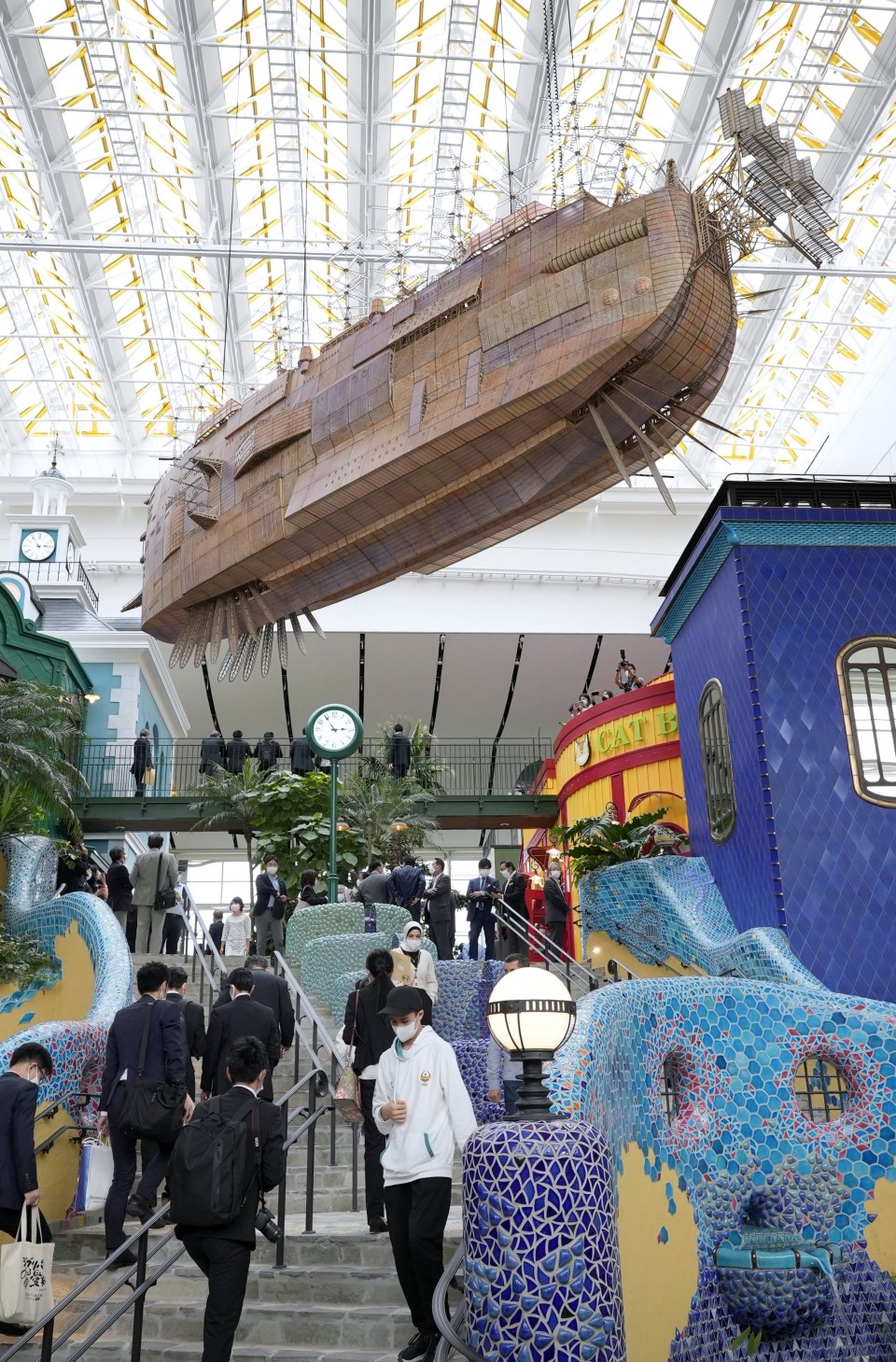 An exhibit recreating the airship in “Castle in the Sky” in the Ghibli’s Grand Warehouse area at Ghibli Park. (Copyright Studio Ghibli)(Kyodo)

Meanwhile, fans of “Whisper of the Heart” can visit the Hill of Youth area for detailed recreations of the antique shop and violin maker's workshop that appeared in the 1995 film.

In Dondoko Forest, a wooden Totoro-shaped statue awaits visitors at the top of the forest hill that sits behind Satsuki and Mei’s House from the 1988 film “My Neighbor Totoro.” Visitors can also tour inside the house, which was modeled after the one belonging to the animation’s lead characters and was retained at the park after being a popular attraction during the world expo. 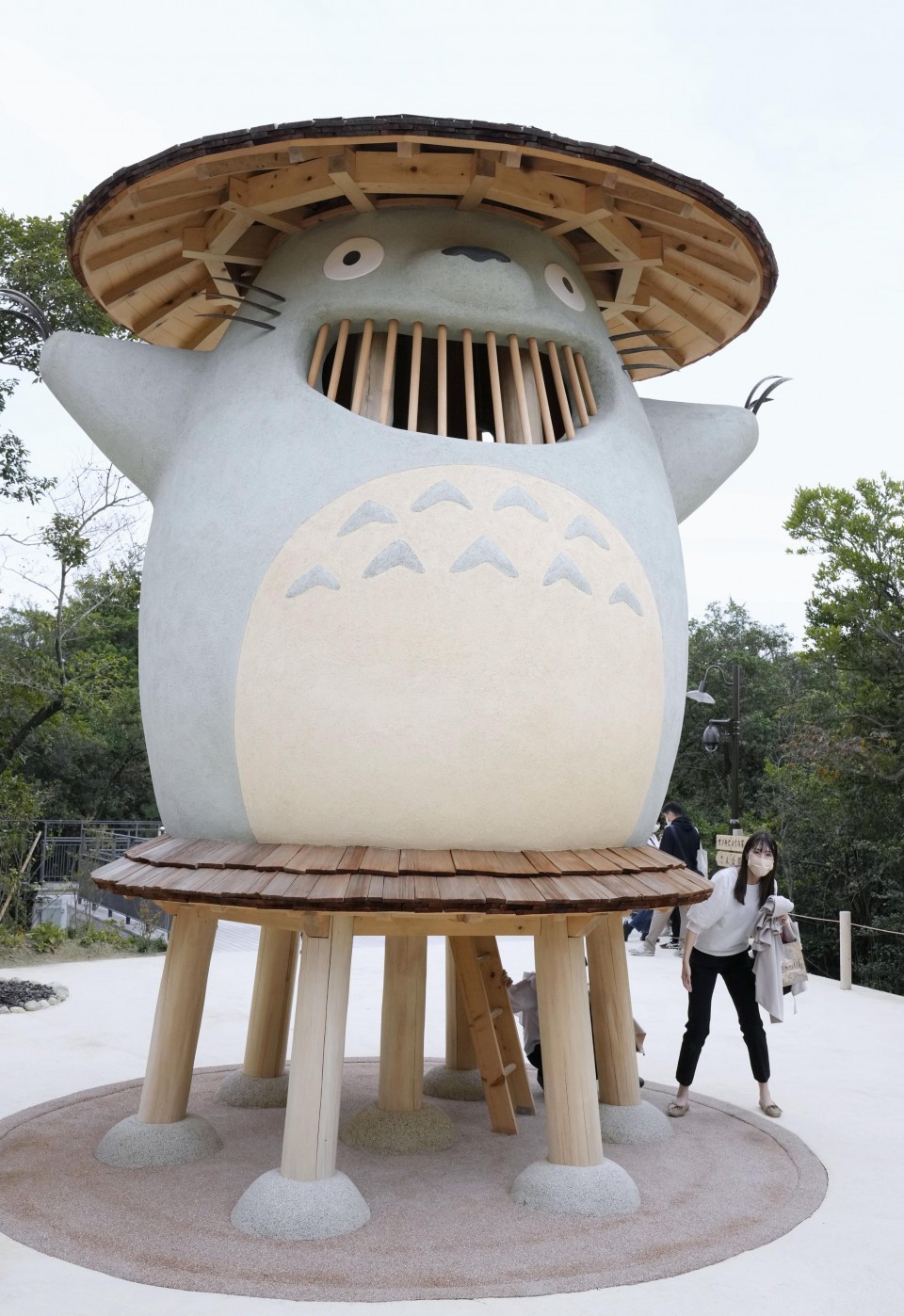 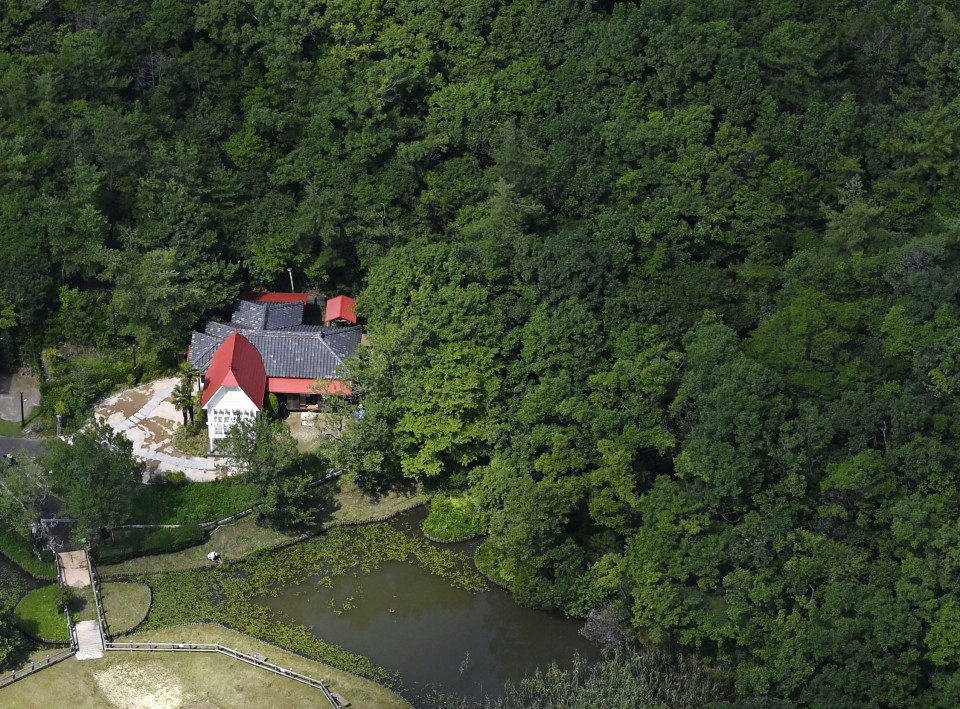 Satsuki and Mei’s House in the Dondoko Forest area at Ghibli Park. (Kyodo)

Tickets are required for each area and must be booked in advance. Ticket fees vary by area, with Ghibli’s Grand Warehouse priced at 2,000 yen on weekdays and 2,500 yen on weekends and public holidays for adults, while entry to Hill of Youth and Dondoko Forest will cost 1,000 yen respectively on all days. Child fares for elementary school pupils and younger will be half that of the adult ticket in the respective areas.

Tickets for November have already sold out. 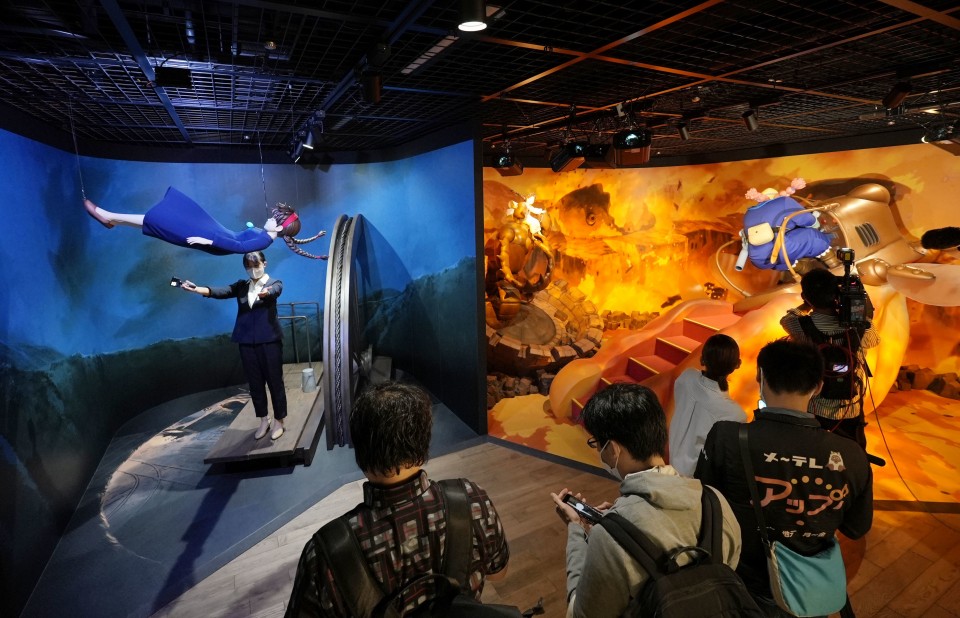