Shohei Ohtani extended his hitting streak to an MLB career-high 15 games in a 2-for-4 outing for the Los Angeles Angels, who beat the Texas Rangers 4-1 on Friday.

Ohtani flirted with his 35th home run in the bottom of the third at Angel Stadium, flying out to the warning track at center field. He registered his second hit of the game with a ground-ball single in the seventh. 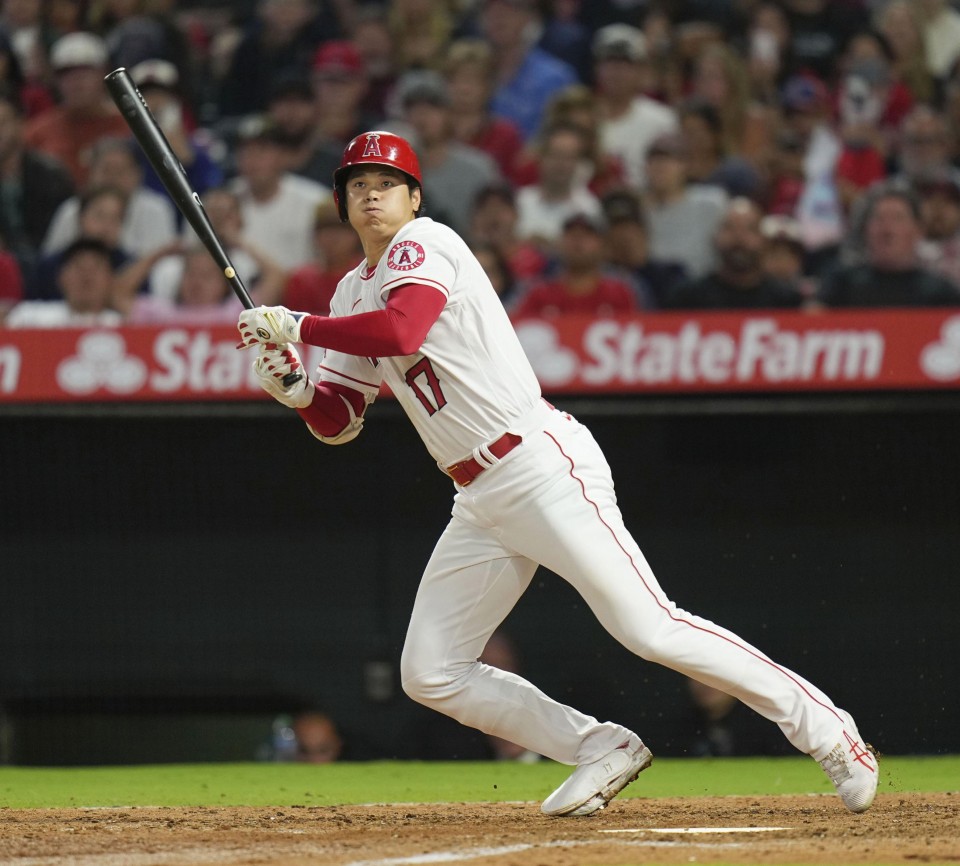 Shohei Ohtani of the Los Angeles Angels hits a ground-ball single in the seventh inning of a baseball game against the Texas Rangers at Angel Stadium in Anaheim, California on Sept. 30, 2022. (Kyodo)

Left-hander Reid Detmers (7-6) picked up the win after striking out nine in six innings of four-hit, one-run ball.

Jo Adell put the Halos on the board with his solo home run in the second and Luis Rengifo made it 2-0 with his 17th homer in the third.

Adolis Garcia's RBI double cut the lead to 2-1 in the fourth before Taylor Ward restored the two-run buffer with his RBI double in the fifth. The Angels added a run on a successful safety squeeze in the eighth, with Matt Duffy scoring on Livan Soto's sacrifice bunt.

At Petco Park, Yu Darvish fell short in his bid for his MLB best 17th win as the San Diego Padres lost 3-1 to the Chicago White Sox.

Darvish (16-8) was charged with the loss after giving up all three Chicago runs in his six-inning start. He struck out six while allowing eight hits and a walk.

At Toronto's Rogers Centre, Yusei Kikuchi earned his first major league save, fanning five while allowing one hit and one walk in three scoreless innings of relief for the Blue Jays, who blanked the Boston Red Sox 9-0.

The Chicago Cubs' Seiya Suzuki went 1-for-4 with a run scored in his team's 6-1 win over the Cincinnati Reds at Wrigley Field.