In recent years, stink bugs, which can cause major damage to farm crops, have been appearing in alarming numbers in Japan.

By the end of August this year, 35 of the country's 47 prefectures had issued "stink bug warnings" to farmers, according to the Ministry of Agriculture, Forestry and Fisheries.

Global warming is likely behind the population rise of the insect, which feeds on plant fluids, experts say, warning that its numbers could keep growing. 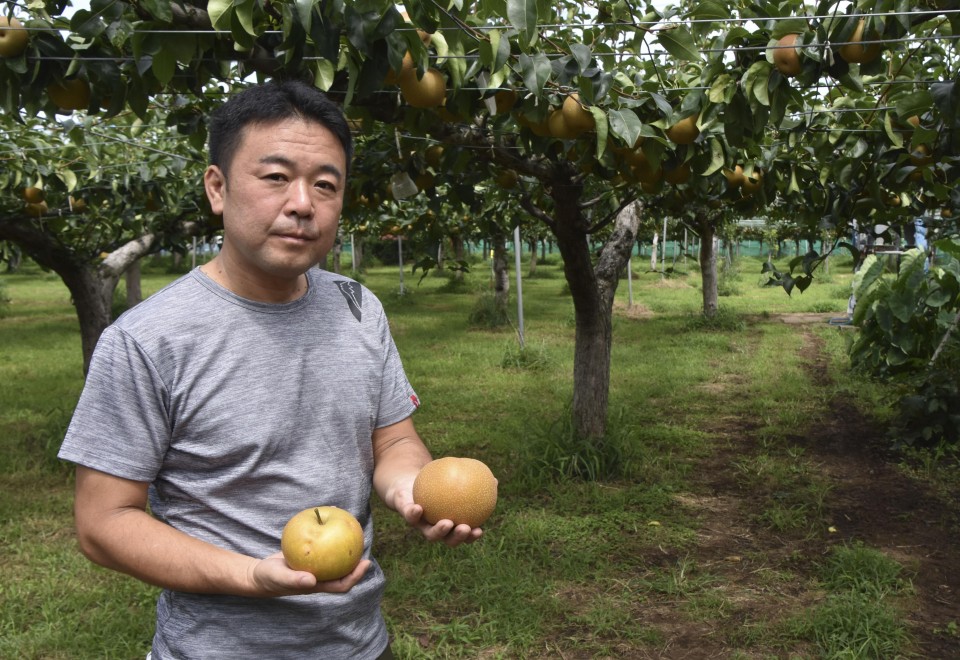 Stink bugs produce a foul smell when threatened, a mechanism thought to help ward off predators. They are also called shield bugs.

"Damage this year is the worst ever," Toru Kawana, 47, a grower of high-quality Japanese pears in Kawasaki, Kanagawa Prefecture, lamented as he held up unevenly shaped pears whose juices had been partially sucked out by stink bugs. "Stink bugs and other pests have increased because of temperature rises caused by climate change," he said. 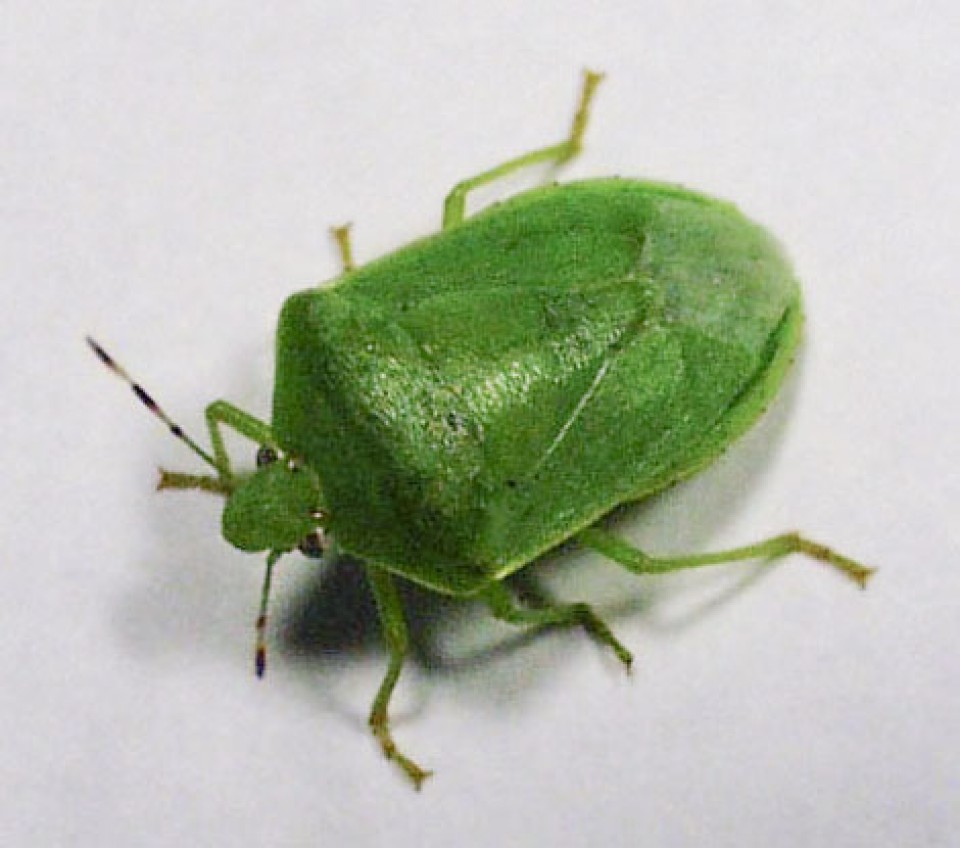 Warnings have been issued against three kinds of stink bug -- those that suck nutrients from and discolor rice plants, bugs that pierce the skin of fruits and extract their juices, and bugs that attack soybean plants.

The agricultural ministry said this year's first warning was issued on May 24 by the Kagawa prefectural government against bugs that feed on fruits.

By the end of August, 24 prefectures had issued warnings against fruit tree stink bugs, 18 against rice stink bugs, and seven against both. In addition, the Yamaguchi prefectural government warned against a possible outbreak of stink bugs that target soybean plants.

In some parts of the country, the numbers of stink bugs were the highest in a decade.

The Fukuoka prefectural government, which warned rice growers of stink bugs in August, used lights to lure the insects to five locations from May till August while carrying out surveys of their numbers and found 1,083 southern green stink bugs, roughly six times the average number in a typical year.

More than 1,000 kinds of stink bug inhabit Japan, and over 100 of them cause damage to agricultural crops, according to Kenji Fujisaki, a professor emeritus at Kyoto University and former head of the Union of Japanese Societies for Insect Sciences.

He said that their numbers have grown in recent years because of global warming and other issues. 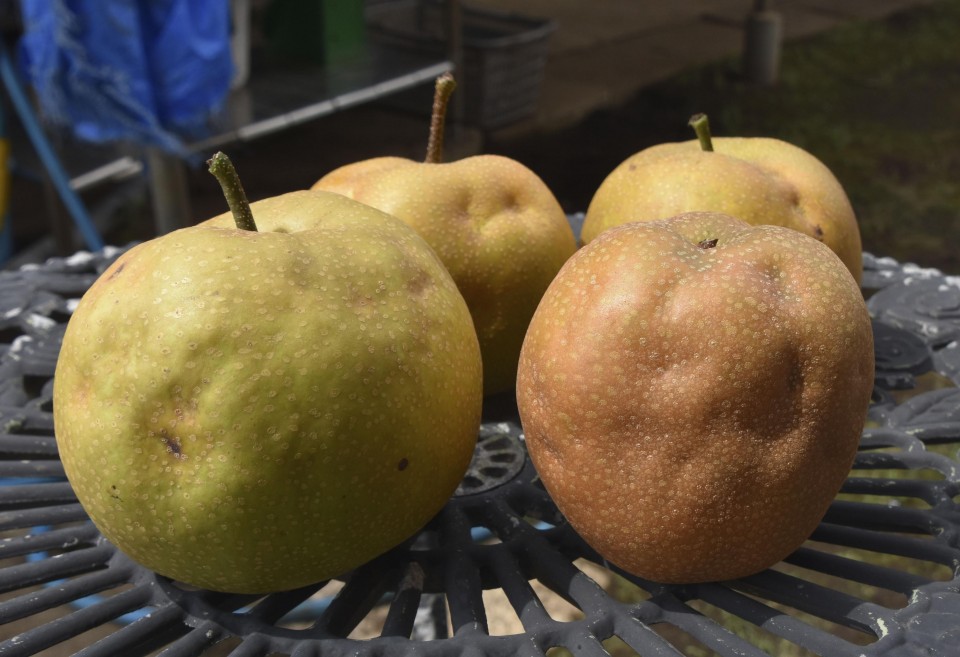 Distorted pears damaged by stink bugs are pictured in August 2022 in Kawasaki, near Tokyo. (Kyodo)

"Southern green stink bugs, which feed on rice, vegetables, fruits and other things, originated in Africa but have spread all over the world, in part because of global warming," said Fujisaki, who has researched stink bugs for more than 50 years.

In a May-July survey conducted by Kyodo News on the impact of climate change on crops in 47 prefectures, many local governments said higher temperatures had brought an increase in stink bugs, resulting in damage to and a deterioration in the quality of rice.

Fujisaki said the biggest impact has been in winter, noting that although stink bugs originated in the south, more are surviving the colder months because of the rise in temperatures.

In fact, warming throughout the year has not only increased their activity from spring onward but also seen them propagate earlier than in the past.

For the farmer facing a significant increase in unsellable crops, this is "a matter of life and death," Fujisaki said.

"Countermeasures, such as the use of yellow fluorescent light that repels stink bugs, insect nets and pesticide spraying should be combined," he said. 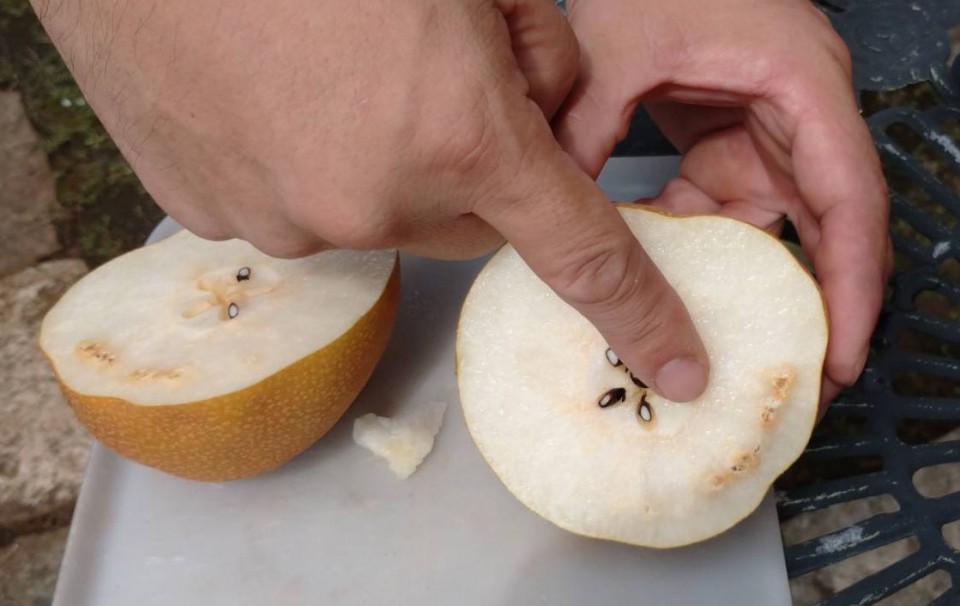 A discolored pear damaged by stink bugs is pictured in August 2022 in Kawasaki, near Tokyo. (Kyodo)