Japan removed on Tuesday its cap on daily arrivals and its ban on individual, non-prearranged trips as it seeks to revive the country's struggling inbound tourism sector by easing its COVID-19 border controls.

In addition to lifting the 50,000-person entry cap and ending the requirement that tourists travel on package tours, Japan will no longer require visitors to obtain a visa if they are citizens of one of 68 countries and regions with which Japan had a waiver agreement before the pandemic.

Domestically, the government started the National Travel Discount program, offering a financial subsidy of up to 11,000 yen ($76) per person per night up to a total of seven nights. The program started in all of Japan's 47 prefectures, except Tokyo, which will join on Oct. 20. 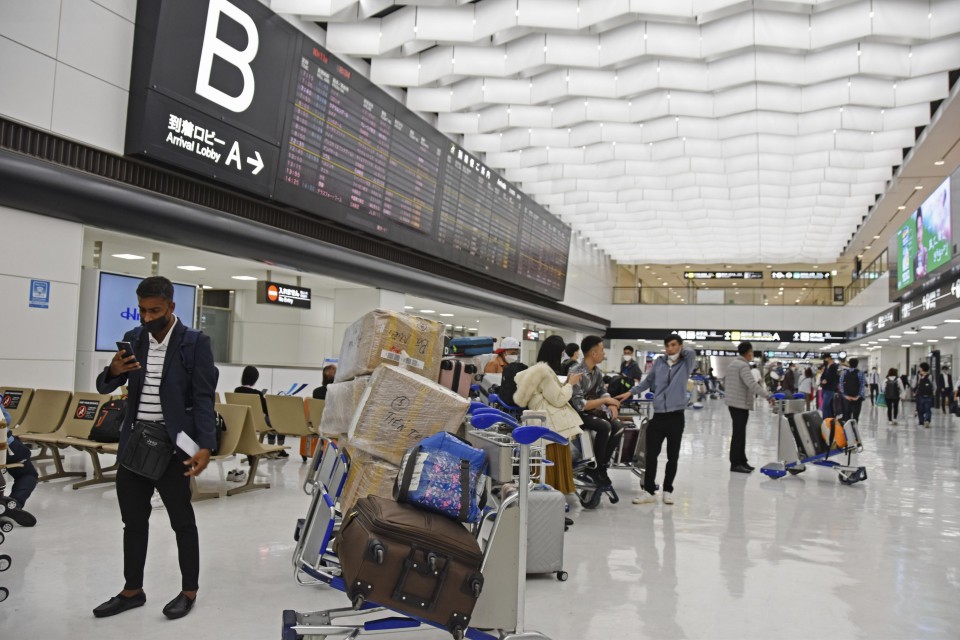 Passengers from abroad arrive at Narita airport near Tokyo on Oct. 11, 2022. (Kyodo)

"Through these measures, we hope to promote tourists' travel both domestically and internationally and help revive demand hit by the pandemic and revitalize regional areas," Chief Cabinet Secretary Hirokazu Matsuno said at a regular news conference.

"It is a landmark day for the tourism industry," said tourism minister Tetsuo Saito at a separate press conference, referring to the eased border controls and the travel promotion campaign.

The Nomura Research Institute estimates that an increase in inbound travelers will generate an additional 2.1 trillion yen for Japan's economy next year, while the impact of the subsidy program until its scheduled end in late December will be worth 446.4 billion yen.

Japan's border control measures have been criticized by tourism, entertainment and other industries at home and abroad for being too stringent and prolonged, and Prime Minister Fumio Kishida has vowed to bring Japan's entry procedures in line with other Group of Seven nations.

The procedures are now simplified, with Japan scrapping its classification of countries and regions by COVID-19 risk and allowing people to skip COVID testing and isolation upon entry as long as they provide proof of either having undergone three vaccinations or returning a negative test result within 72 hours of departure.

Among many international travelers arriving at major international airports, 43-year-old Tanpraphan Noppanct, who arrived at Kansai airport from Bangkok with his 10-year-old daughter, said it is the first time he has come to Japan after the coronavirus outbreak, and he wants to enjoy Japanese food and sightseeing. 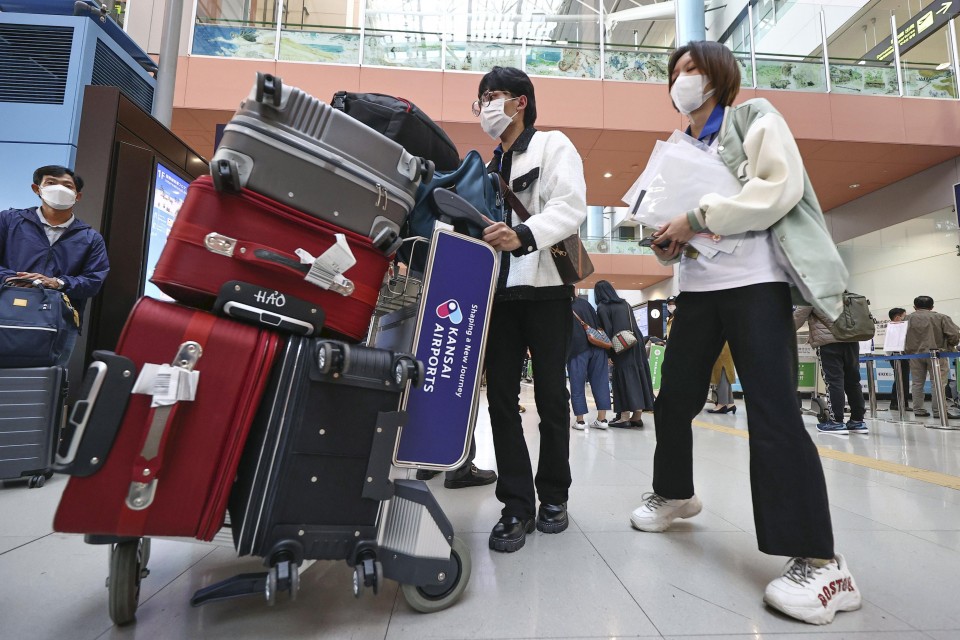 Travelers arrive from overseas at Kansai airport in Osaka Prefecture on Oct. 11, 2022. (Kyodo)

In 2019, prior to the outbreak of the global coronavirus pandemic, a record 31.9 million tourists visited Japan, with over 2 million arriving each month. The estimated monthly figure for August this year was 169,800, according to the Japan National Tourism Organization.

Prime Minister Fumio Kishida said in a speech earlier this month that he aims to raise visitors' annual spending in Japan to 5 trillion yen by reviving inbound tourism. He instructed ministers on Tuesday to compile measures to achieve that goal.

But experts say Japan still has a long way to go in achieving that target as the number of Chinese tourists, who accounted for about 40 percent of the spending before the pandemic, has yet to recover due to China's strict COVID-19 containment policy. 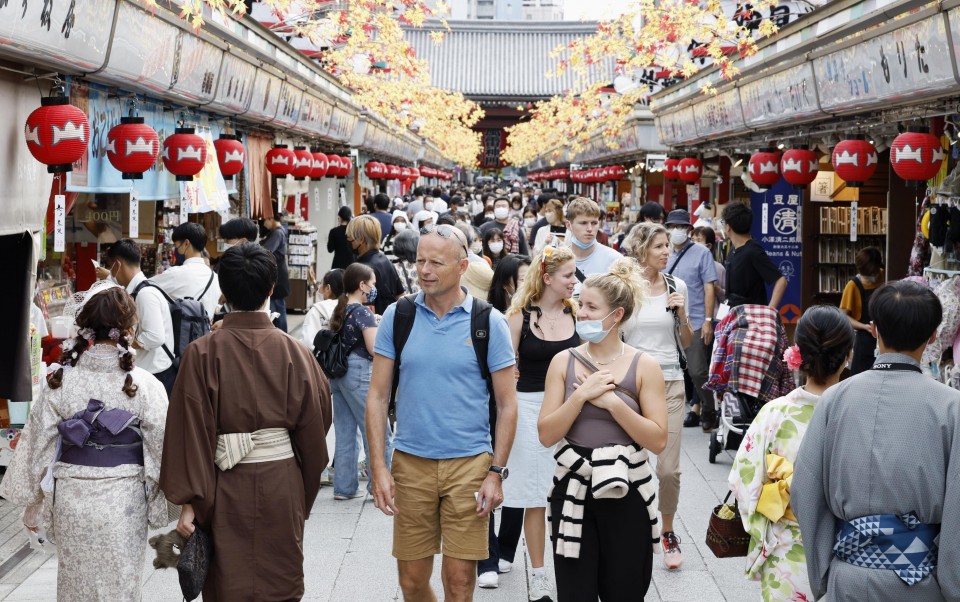 The new domestic travel campaign targeting residents of Japan was launched to help regional economies that relied heavily on tourism. The central government subsidizes it, but prefectural governments implementing the campaign can also contribute with their own subsidies.

Prefectural governments can also request the central government remove them from the list of participating areas, but most have yet to set criteria to do so as they are keen to attract travelers.

"The coronavirus pandemic dealt a major blow to the tourism industry, and the travel subsidy program will be meaningful" in reviving it, said Keiichiro Kobayashi, macroeconomics professor at Keio University in Tokyo.

"Unless a new, highly virulent variant of the virus emerges, there is no need to stop economic activities, and it is appropriate for prefectural governments to make their decisions based on the status of the local medical system," Kobayashi added.

In 2020, Japan introduced the "Go To Travel" subsidy program, which was similar to the latest scheme, but the government was criticized for being too slow to end it when it seemed to be contributing to the virus' spread.

With the expected influx of travelers, the tourism industry faces the challenge of a potential shortage of workers, as the pandemic has contributed to a more unstable and vulnerable sector due to possible unpredictable infection levels.

A survey by Teikoku Databank Ltd. showed in July that 66.7 percent of hotels and inns already felt they were short of full-time employees.

The following is a chronology of major events related to Japan's COVID-19 border control measures.

April 3 -- Japan adds 49 countries and regions, including the United States and the whole of China, to its entry ban list as part of COVID-19 restrictions.

Dec. 28 -- Japan halts new entries of nonresident foreign nationals from around the world as countermeasure to COVID-19 variant.

March 1, 2022 -- Japan eases COVID-19 daily entry cap to 5,000 and allows foreign nationals to enter Japan for purposes other than tourism.