China's Communist Party opened Sunday a meeting of senior members who will make final arrangements for its twice-a-decade congress where leader Xi Jinping is expected to secure an unprecedented third five-year term as party general secretary.

The seventh plenary session of the ruling party's 19th Central Committee, which is expected to run for around four days, will discuss a draft work report to be delivered by Xi at the congress, due to start Oct. 16, and finalize plans for China's top leadership for the next five years. 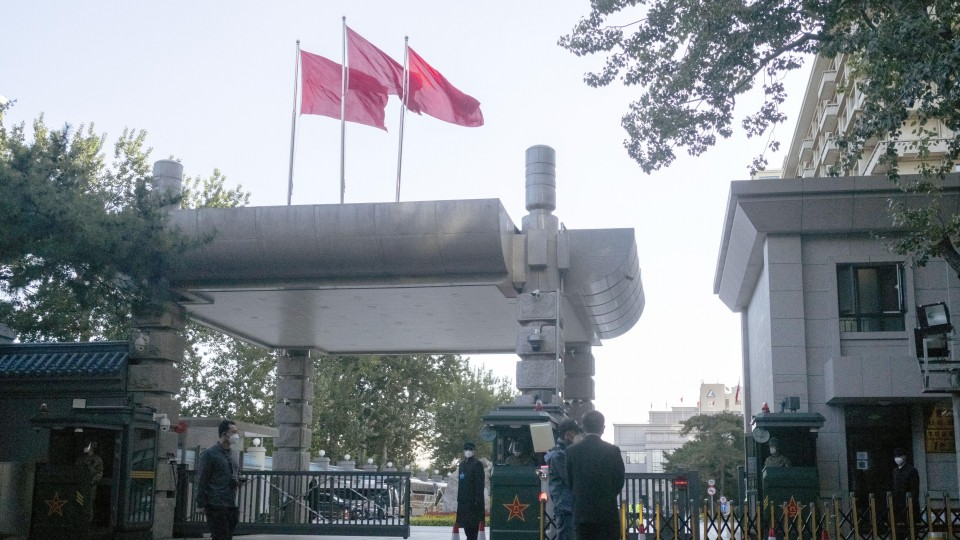 Security officers guard the entrance to a plenary session of the Communist Party of China's 19th Central Committee in Beijing on Oct. 9, 2022, where final preparations are being made for the party's twice-a-decade congress due to start on Oct. 16. (Kyodo)

The work report, which will outline basic policies as well as development goals of the party and the nation through 2027, is also expected to detail achievements in the 10 years since Xi became party chief in 2012.

Security was very tight around the Beijing facility where the closed-door gathering is being held, with Chinese state-run media confirming the plenary session had begun in the morning.

The party is expected to issue a communique summary through the media on the last day of the session.

The Communist Party is expected to amend its constitution at the upcoming congress to incorporate wording that indicates Xi's unswerving power and authority has been cemented, according to several party sources.

In September, the party's Politburo decided to incorporate into the constitution "major theoretical viewpoints and strategic thoughts," with some sources saying the supreme rule will stipulate Xi's prominent status that justifies a long-term rule.

A pivotal resolution on the country's modern history adopted by the party last year touted Xi's accomplishments since he became its leader in 2012.

The previous congress in 2017 enshrined in the party constitution "Xi Jinping Thought on Socialism with Chinese Characteristics for a New Era," making his status comparable to Communist-led China's founding father Mao Zedong and Deng Xiaoping, the architect of the country's reform efforts.

With the amendment to the party constitution, all Communist Party members will be obliged to protect Xi's prominent status, one of the sources said.

Xi explained a work report at the Sunday meeting, while Wang Huning, a member of the Politburo Standing Committee and the country's top ideological theorist, talked about a draft amendment to the Communist Party constitution, according to the official Xinhua News Agency.

The congress will take stock of the party's work over the past five years, "with Comrade Xi Jinping at its core in uniting and leading the whole Party and Chinese people of all ethnic groups to uphold and develop socialism with Chinese characteristics in the new era," Xinhua said.

The identity of the successor to Premier Li Keqiang, 67, who is set to retire next spring, and whether Li will stay on in the seven-member Politburo Standing Committee -- the country's highest decision-making body -- even after retirement, have been drawing attention.

Li is in charge of mapping out the nation's economic policies. Speculation has been building that Wang Yang, 67, chairman of the National Committee of the Chinese People's Political Consultative Conference, or Vice Premier Hu Chunhua, 59, may succeed Li.

The 20th National Congress of the party, the most important political event in China this year, is expected to run for a week and be attended by about 2,300 delegates from across the country. It will choose the members of the Central Committee.

A day after the conclusion of the congress, members of the Politburo and its Standing Committee will be selected at the first plenary session of the party's 20th Central Committee. The Politburo now has 25 members.

In 2018, China removed from its Constitution a two-term limit for the president and vice president, paving the way for the 69-year-old Xi to hold power for life.